Elizabeth Warren Jumps On The Medicare-For-All Train, Because She Is Awesome 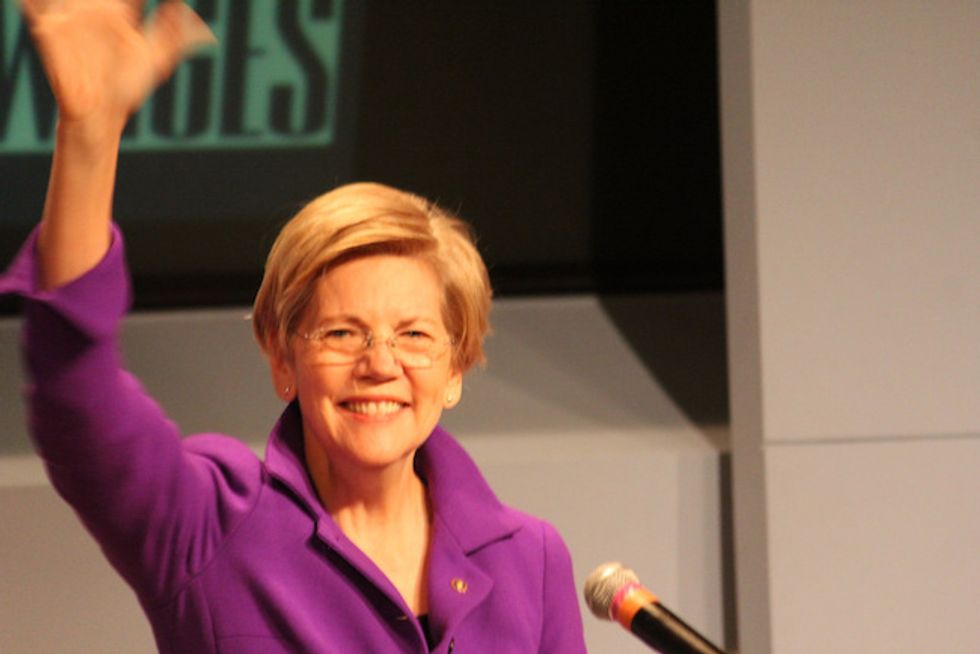 Hooray! Nice Time! Good things are happening and we are here to CELEBRATE! Elizabeth Warren, who is your hero and favorite person, has officially signed to support Bernie Sanders' Medicare-for-All bill.

Warren made the announcement in an email to supporters, asking them to sign a petition to support the legislation, which is expected to be released Wednesday. She joins Sheldon Whitehouse and Kamala Harris, who signed on early in August.

Personally, I am taking this as a sign that Warren and Harris will share the Democratic ticket in 2020, and all of my dreams will come true.

"There is something fundamentally wrong when one of the richest and most powerful countries on the planet can’t make sure that a person can afford to see a doctor when they’re sick. This isn’t any way to live," Warren wrote, referring to constituents she spoke to who would have been forced to choose between their children's health and their financial security had they not had any help from the government.

She then explained the very simple and understandable concept that it is gross for people to be going bankrupt as a result of seeking medical care:

My own family plunged deep into debt when my daddy had a heart attack. My parents paid on those bills for years. Years later, as a bankruptcy law professor, I studied why working families were going broke. Through interviews and court documents, my research partners and I showed that most people who file for bankruptcy looked a lot like my family.

The overwhelming majority had once been solidly middle class – and about half had filed for bankruptcy in the aftermath of a serious medical problem. And here was the kicker: about three-quarters of them had health insurance – but it just wasn’t enough. Medical bankruptcy was crushing millions of American families.

While applauding the steps towards universal healthcare taken by President Obama's Affordable Care Act, Warren explained that more must be done in order to ensure that this is not a thing that happens to people. Because she's right -- this is no way to live.

The good thing about the Medicare For All approach is that it's a system we already have in place, with no need to create a new one! A system that works, and is in fact beloved by people across the political spectrum. Including, may I note, many of those Tea Partiers from the early days of the Obama administration.

Now sure, they had no idea that Medicare was a government program and was, in fact, "socialized medicine" -- but they loved it nonetheless. They made so many signs!

Not a lot of "Take My Medicare, Please" signs out there, I'll tell you that much. No one's trying to give up their Social Security either. You wanna know something even crazier? In a lot of the crazy ass right wing forums I monitor, there are more supporters of single payer than there are otherwise. Except for the Murray Rothbard anarcho-capitalists, of course.

Single-payer has gone from being of those "pie-in-the-sky" things that progressives wanted and mainstream Democrats would say "Oh, you know, we would totally love that too, but no one's ever going for that" to possibly being the issue that could help Democrats start winning more elections. Hell, if it's ever implemented, and we also make it legal for the government to bargain down prices with pharmaceutical companies? They'd probably never lose another one. Not if they Republicans were trying to take it away.

People, at the end of the day, don't want to lose their house because someone in their family got cancer. They don't want to have to fear that, and they shouldn't have to. It's no way to live.

Now celebrate in the comments of your OPEN THREAD!