Elizabeth Warren Just Might Have A Shot At Reelection 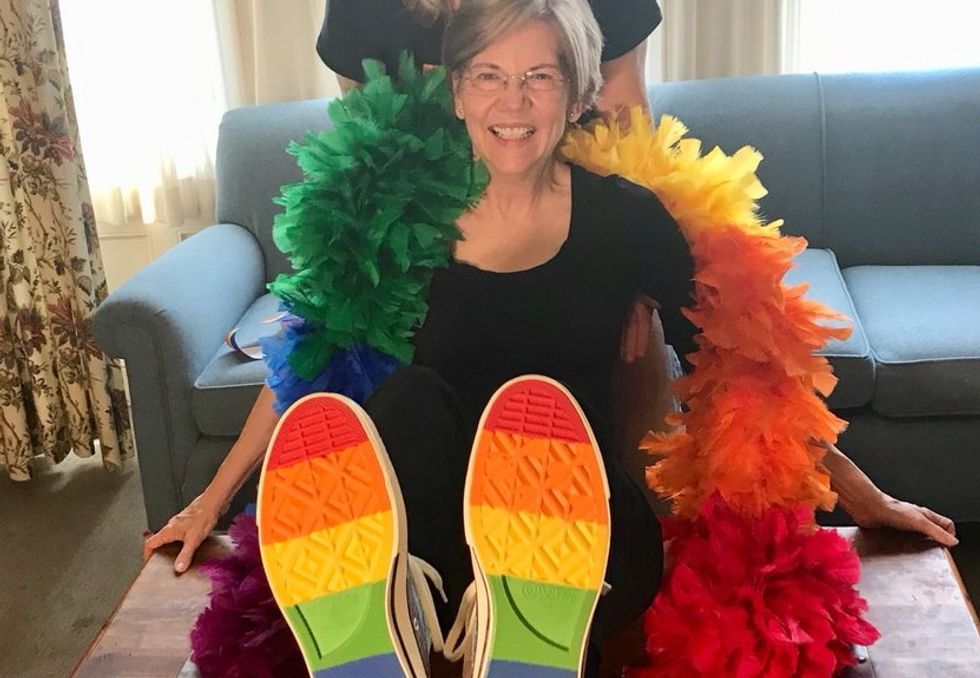 Sometimes we have to remind ourselves that Elizabeth Warren is actually a first-term US senator. She's been such an influential figure, a central player in the fight against big banks and the driving force behind the creation of the Consumer Financial Protection Bureau, that it seems like she's been a major player in politics longer than she has. Plus, wingnuts just hate her, because she persists.

Last year, just after Donald Trump's inauguration, Fox News took inordinate pleasure in predicting Warren might be in big reelection trouble, thanks to a WBUR poll in which only 44 of Massachusetts voters sampled agreed Warren "deserves reelection," while 46 percent said it was time to "give someone else a chance." Sure she might hope to be president, but can she even hold on to her seat? Especially with brilliant potential opponents like Curt Schilling, huh? Alas, Schilling decided not to run, the major Republican contenders in the primary have little name recognition, and there's a rightwing loonypants running as an independent to siphon away Republican votes. Even taking into account respected political pundit Our Girlfriend's reminder that nothing in politics is a sure thing, we're willing to go way out on a limb and say Warren's chances of reelection are at least somewhat good.

Despite that 2017 poll, which really doesn't reflect much other than people's tendency to always want someone new, in the abstract, more recent polling by WBUR had Warren with a 30-point lead over the closest Republican candidate. Like any early polling, that number's likely to tighten once Rs pick a candidate in the primary -- which isn't until September 4. But as of right now, Warren has a comfortable approval rating of 53 percent, with 61 percent approval among women. (Big surprise -- her approval among men is more split: 46 percent unfavorable, 44 percent favorable. Nevertheless, she's persisted.)

As for fundraising, Warren is exactly the big money draw you'd expect, and it's not all just from national Dems who love love love her (which we do, of course). The vast majority of Warren's donations are in amounts under $25, and in the first quarter of 2018, over 10,000 of her donors were right in Massachusetts, where gosh darn it, Democrats like her. She's among the top fundraisers in the Senate, and well ahead of the Republicans who want to make her stop being so professor-y and liberal and not-Trump. Good luck with that, guys. Despite -- or because of, really -- Warren's national profile and fundraising advantage, rightwing groups are expected to throw tons and tons of money into anti-Warren ads, because she is the Devil.

And oh, do they hate Elizabeth Warren. Money going into anti-Warren efforts this year may have less to do with defeating her in the Senate race than in trying out strategies to use against her if she runs for president in 2020. As is mandatory, Warren says she's very happy as a senator. But the Rightwing Test Kitchen is already in action in Massachusetts: creepy Trumpster billionaire Robert Mercer is involved, funding a super PAC with the creative name "Massachusetts First." That bunch sponsored this fun anti-Warren radio ad:

“Who is the real Elizabeth Warren?” growls a narrator, stating the opening gambit of what promises to be the GOP’s lead line of attack. “It’s hard to tell.” The ominous-sounding campaign ad, which began airing halfway through 2017, rebukes the first-term senator for making six figures at Harvard while students in the state accumulate debt. “Hypocrite professor Elizabeth Warren,” the voice-over concludes. “Huge salaries for her; rising costs and crushing debt for families and students like you.”

Just your normal everyday billionaire stirring up class resentments against someone who has literally made student debt and protection from financial vultures a focus of her career, even prior to her political career. While Massachusetts voters seem unlikely to dump Warren, the senate campaign seems a likely testing ground for whether messages like that can be scaled up for a national argument. (This Boston magazine article on Massachusetts 2018 as a proving ground for 2020 oppo and ratfucking is a darn good read!)

A weed bill with something for (almost) everyone -- states' rights done right.

And in the meantime, Elizabeth Warren is working to keep federal hands off legal weed, and even Donald Trump says he's likely to end up supporting the proposal, though he'll no doubt insist it was cosponsor Cory Gardner's idea all the time.

As for the Republicans running against Warren, the front-runner is state Rep. Geoff Diehl, who received the GOP endorsement at the party's convention in April. Diehl ran Donald Trump's 2016 Massachusetts campaign, and even got Sean Spicer to campaign for him. The other Republicans are John Kingston, who's taking the mandatory role of Outsider Republican Businessman -- last year he infused $3 million into his own campaign -- and Beth Lindstrom, who managed Scott Brown's successful 2010 campaign to become a US senator for two years. It's unclear whether she has a pickup truck of her very own. All three of them, as we've noted, will have to overcome lousy statewide name recognition, as this poll from March shows:

The "never heard of" numbers for Diehl, Lindstom, and Kingston haven't improved significantly in a May poll, either (but we don't have a pretty graphic for that one). As the summer and the campaign progresses, of course, and as TV money pours in from rightwing sources, those names will become better known.

Rightwing critics of Elizabeth Warren have ONE HILARIOUS JOKE about her, which proves that everything she says about anything is wrong.

And maybe Republicans will finally find something more creative to say against Warren than the One Hilarious Rightwing Joke they simply can't let go of. You know the one. That hilarious, troll-gathering mockery of Warren's family lore that somewhere way back in the past, she had a Cherokee ancestor. Apparently, that is just the funniest, most scandalous thing in the world, so very important to Republicans that Donald Trump thought Navajo Code Talkers, who literally played a key role in winning WW II, would love hearing him call her "Pocahontas." The war heroes didn't laugh at Commander Bone Spurs, but wingnuts cannot get enough of the One Joke, and they flock to any mention of Warren to share their wit (we guarantee they'll show up here -- please remember to flag 'em for moderation). Even R frontrunner Diehl couldn't quite bring himself to say the comment was inappropriate, because why would he?

Diehl hasn't adopted the epithet yet, and neither have the other two Rs, but it's probably just a matter of time. Or they may simply leave that to super-crazy Shiva Ayyadurai, who initially campaigned as a Republican but in November dropped out of the primary to run as an independent. He is Indian-American, and his entire schtick is his dumb campaign slogan: "“It Takes a REAL Indian to Defeat a FAKE One." Here he is telling Stuart Varney why he is the REAL Indian who can beat Warren: (hint: she is an elitist hater of successful millionaires, and also a fake Indian, woo-woo-woo):

OK, we exaggerate slightly: the guy who accuses Warren of lying about her heritage has also based much of his own image on a far greater lie: Ayyadurai lied that he "invented" email when he was a mere boy genius of 14, and has sued any number of outlets for defamation when they say, accurately, that's not so. Ayyadurai's lie is, like many of the best ones, based on a tiny, partial speck of truth: he did indeed write a program for electronic communication, and copyrighted the name "email" in 1978. His side business of getting big settlements from nuisance lawsuits came to an end last fall when a judge threw out his lawsuit against website Techdirt for stating the plain fact that email existed long before the internet, and long before Ayyadurai's copyright. Too bad, so sad.

Shiva Ayyadurai is slated to speak at the 'Free Speech' rally in Boston. He does not seem nice!

Also, Ayyadurai probably didn't win too many friends outside the racist fringe when he spoke at Boston's great big Mike Cernovich slob picnic in the wake of Charlottesville, which was definitely not racist, heavens no.

So how well is Ayyadurai doing at uniting the right? Downright shitty, according to the most recent polling from WBUR/MassInc, the one that showed the three Republicans with continued low name recognition, Ayyadurai doesn't appear to be in position to do anything more than split the rightwing vote. Against Warren and Ayyadurai, the poll found Diehl, Lindstrom, and Kinston each got 19 percent, while Ayyadurai only managed seven or eight percent. Warren polled at 54 to 56 percent depending on the opponent, with about 15 percent undecided.

What we're saying here is that Elizabeth Warren is in the race of her life, and you should send her money because one of these days, the rest of America will find those war whoop jokes as side-splitting as a fraction of crazy people do.