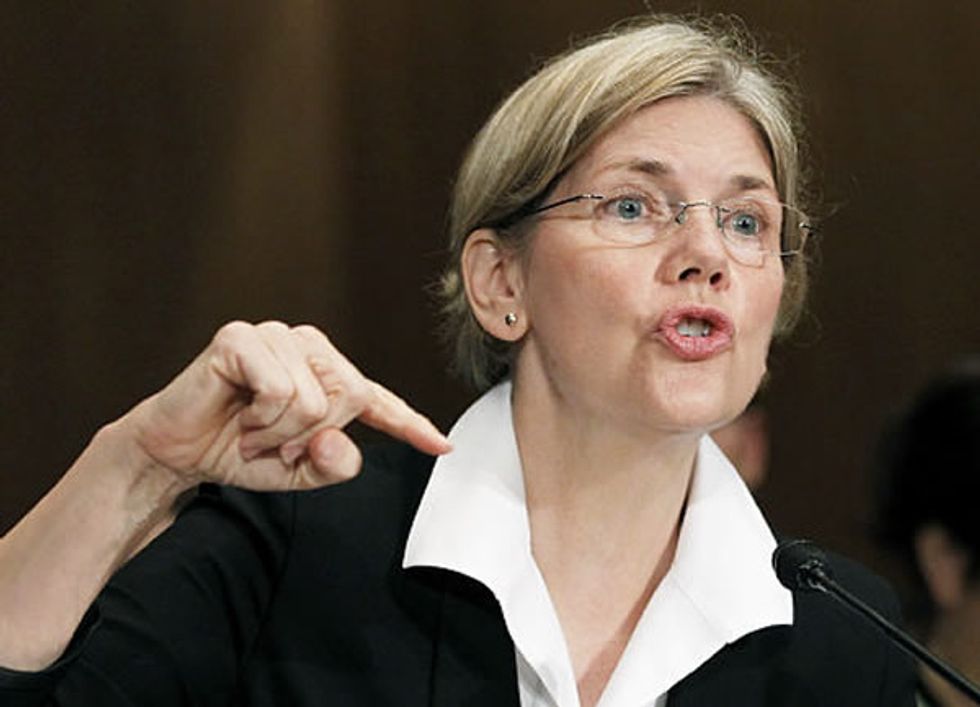 Massachusetts nerd goddess Sen. Elizabeth Warren does not suffer fools gladly. There's one particular fool she has very little patience for: the presumptive Republican nominee. Tuesday night, Warren tweeted out a glorious stream of invective against Donald Trump, vowing she would do everything possible to ensure his "toxic stew of hatred & insecurity never reaches the White House." That prompted famous Twitter stud and non-office-holder Scott "Bqhatevwr" Brown to wonder if she'd been drunk tweeting, which was good for a laugh. Trump himself apparently only noticed her tweetstorm Friday, when he sent out a couple of tweets with his characteristically whimsical wit:

Oh, Donnie. You are, as they say, out of your league. Let's just say Warren was not gentle in her replies. For starters, she appears to feel slighted by just how lazy Trump had been in trying to insult her. Bonus points for her Trump-style closing:

Was there more? There was, in point of fact, more. Oh, look, and instead of calling Trump names, she's actually hitting him on substance. Remember how well Scott Brown's tomahawk-chopping supporters defeated Warren? Weird how that goofy professor lady manages that, despite being so GOOFY:

Not that any of it fazed Trump. He latched onto that "Goofy" nickname, since it so clearly was getting under Warren's skin, and took the fight right back to her, declaring himself the winner:

Ow, Perfesser Goofy! YA BURNT! Guess Trump totally won that round, huh? And then his online Flying Monkey Brigade followed up with the most hilarious photoshops EVER!

Oh, that really shut her down GOOD! Donald Trump really does lead the Smart Movement.

Update: Alert Wonkette Operative "tedmills" informs us we TOTALLY MISSED Sen. Warren's final reply, which is awesome. Wonkette regrets the omission, and here it is:

After Warren's election-night tweetstorm, Lawrence O'Donnell speculated she was "auditioning" to be Hillary Clinton's VP, since the Veep is traditionally the official attack dog, a la Spiro Agnew. We don't know about that -- it looks more like Warren simply can't stand Trump, and enjoys saying it, thank you very much.