Emma Gonzalez Will Be The Boss Of You 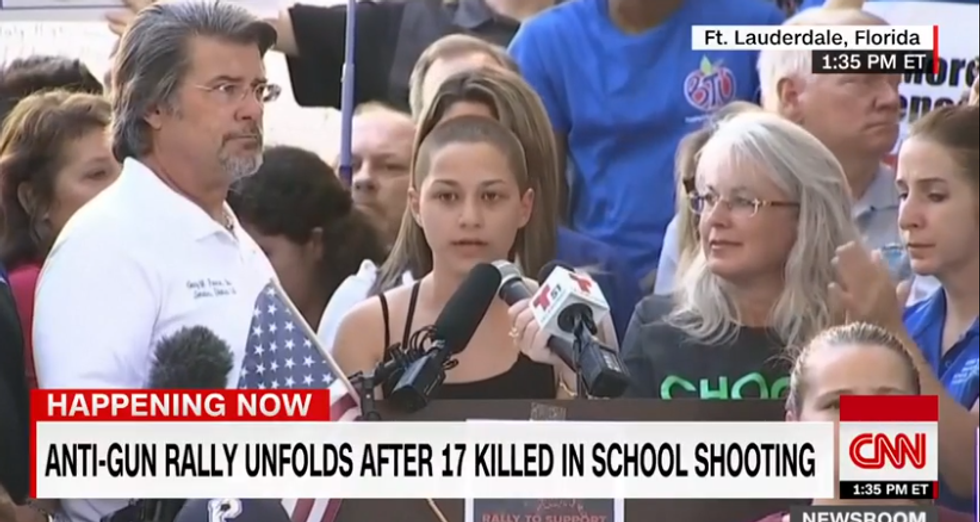 A good thing -- but it's a REALLY good thing -- has come out of our latest gun terror massacre in Florida. The kids, the ones who actually survived the shooting, are not down with a bunch of dumb thoughts and prayers from NRA-funded politicians whose political careers depend on not doing anything to stop gun terror massacres. Never have we ever seen a young generation so accurately and boldly call out (many of) their elders for being absolutely full of shit.

We had a post this morning about a lot of the kids from Marjory Stoneman Douglas High in Parkland, Florida, but we feel Emma Gonzalez deserves her own post. Did you watch the viral video of Gonzalez, age 18, a high school kid, literally calling "BS" on all the grown-up Republicans with their gun blood money? Did you watch her tell them YOUR TIME IS FUCKIN' UP? If you haven't, you have stumbled onto the correct internet news post!

Here's that video, followed by our favorite Gonzalez quotes, delivered at a rally this weekend in Florida against gun violence:

AND SO FORTH. Have we convinced you to watch the video and to support Emma Gonzalez in her presidential run in 2036? She will be running against Ivanka Trump, probably, and it will be hilarious.

In response to Gonzalez's video and those of other students from Marjory Stoneman Douglas High School, Trump has decided he guesses he supports strengthening background checks, he guesses, if he gets around to it. We are not as polite as Emma Gonzalez, so instead of calling "BS," we say, "Go fuck yourself, Trump, we will believe it when we see it."

Gonzalez had some final thoughts about Trump and his rage-tweeting about how it's the FBI's fault the shooting happened, because they were too busy investigating NO COLLUSION, NO RUSSIAN COLLUSION, which she shared on MSNBC this weekend:

I think the best way to deal with this is to ignore him. I think we can all agree that the things that President Trump tweets is nothing that will have a lasting impact — unless it’s a negative lasting impact — on the people around us.

At this point especially, the things that he mentions when he brings up talk of the FBI, he’s trying to blame somebody. And we can’t let him do that. So, the best thing for us to do is to ignore him and to continue fighting our fight, the fight that he refuses to acknowledge. The fact that he refused to even tweet the word "gun" in any of his tweets. And yet, he insists on tweeting, and he insists on blaming the Democrats for something that he did wrong ...