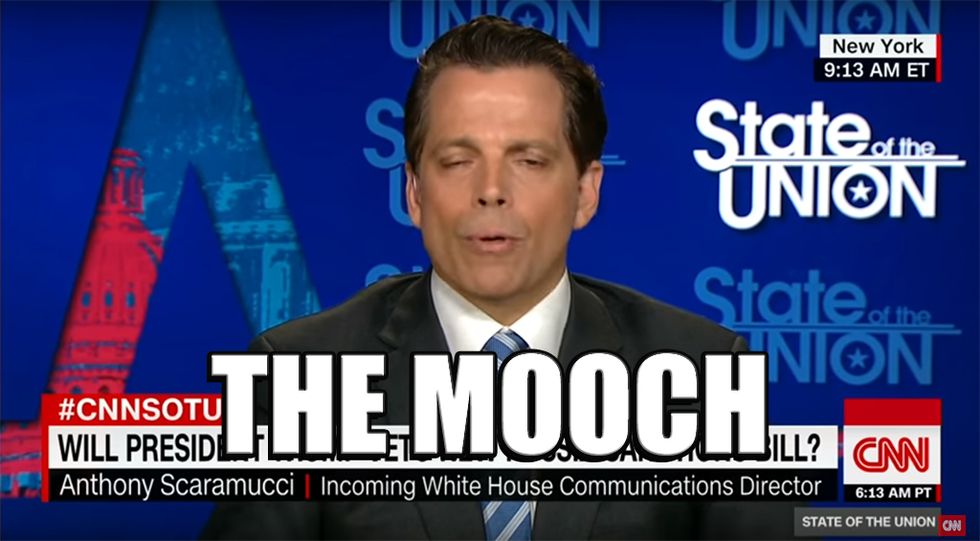 Good Monday morning, Wonketariat! We hope you had a lovely weekend, 'cause today we got many newses to tell you about. Here's some of the things we may be talking about today.

Jared Kushner will quietly speak to the Senate Intelligence Committee today, and he's released an 11-page statement about all the TOTALLY NORMAL meetings he had with Russians that he keeps forgetting. Good thing he's not under oath. [Full Statement]

Nataliya Veselnitskaya had an interesting day in court before meeting Trump Jr., Prince Kushner, and the rest of the Russian power rangers.

Trump woke up and started threatening the GOP on Twitter for screwing up on killing the ACA, and doing "very little to protect their president."

South Dakota Republican Senator John Thune says the Senate won't give up on screwing poor people out of healthcare.

Newt Gingrich is the face of a new conservative lobbying supergroup pushing tax cuts for businesses now that TrumpCare is being beaten to death (MAYBE, MAYBE NOT).

Congress is set to pass Russian sanctions that Trump has been fighting, kicking and screaming. Weird!

Republicans are coming out of their fall-out shelters and bitching about Trump ruining their plans to screw up all the political systems.

A federal appeals court says you can't vape on airplanes as existing anti-smoking laws prevent you from behaving like an obnoxious ass.

The Mooch seems to be bungling Trump's messages after he went on teevee shows and contradicted statements from other Trump spox. OOPS!

Plaintiffs in the Kentucky lawsuit over violence at Trump rallies are seeking Trump's tax returns to see if there's a link between hate groups, but his lawyers are brushing it off as using "the discovery process to inflict maximum political damage." Thanks for the news-flash, Cronkite!

Democrats have a new campaign slogan for 2018 that focuses on economic policy. It's called "A Better Deal," and they're hoping to bring everyone, from Berners to grumpy olds, back to the bargaining table.

Two of the biggest dark-web black markets were raided in a global effort to crack down on the sale of drugs like fentanyl, and now the Internet is freaking out.

Trump is pushing out the State Department on discussions over the Iranian nuclear agreement as REXXON keeps bucking Trump.

The FBI is now involved in an investigation of corruption in the South Carolina statehouse that keeps growing like a kudzu infestation.

Rep. John Lewis went to San Diego Comic-Con and led a march through the nerd-filled halls.

The General Services Administration is warning local governments to stop software from Kaspersky Labs over reports that it may contain backdoors for Russian hackers.

A US District Court judge has ordered Kentucky to pay $222,695 in legal fees to the four gay-mo sexual couples that former Rowan County clerk, Kim Davis, refused to gay marry. The joke here is taxpayers have to pay for Kim Davis being A Idiot.

A British tabloid is reporting that Trump will make a "dummy" visit to Britain to see if he can handle a real state visit and avoid embarrassing the Queen.

Thousands of Poles took to the streets this weekend in protest of a right-wing power grab to limit the judiciary and consolidate power. Some measures were vetoed this morning by Polish President Duda, surprising the hell out of a lot of people.

Now that ISIS/ISIL/Daesh/whatever is showing signs of breaking apart in Syria and Iraq, European courts are wondering what to do with the jihadists returning home. So much for the caliphate.

The New York Times wants an on-air apology from Fox and Friends for an old story about the escape of an ISIS/IS/whatever leader that it butchered.

Stubbs the cat, the duly elected mayor of Talkeetna, Alaska, has passed away at 20. Stubbs served in office for most of his life, and consistently remained one of the highest polling politicians. :(

Brian Stelter had to remind Kellyanne Conway that it's not CNN's job to push pro-Trump PR.

There's a weird pseudo-cult around Melon Trump in Slovenia, but not everyone is drinking the Kool-Aid poison-free red sugar water.

The NRA is blaming Black Lives Matter for racial violence, and they even went to central casting to find a guy to blame left-wing activists for all the cops killing black people.

NRA mouthpiece Dana Loesch is mad at The Mooch over some tweets about gun control from back in 2012.

Trump's White House officials have been using emoji to refer to one another with Scaramucci as a kissy face, and Reince Priebus as a reindeer. ¯\_(ツ)_/¯

Glenn Beck mouthed off on a podcast about that time Tomi Lahren was "You're Fired," and then whined about the left/right media.

Bill O'Reilly is reported to be in talks with Sinclair Broadcasting, the conservative media venture that's been eating up local news outlets and pooping out Trump spox.

And here's your late night wrap-up! Stephen Colbert noticed that Trump-Russia looks like a bad heist movie; The Daily Show had a special goodbye for Spicey; Chelsea Handler went overseas to spread some goodwill.

We need your help (in the form of Ameros) to keep doing all the newses and 'splainerings, and Rebecca says you're about $2000 behind for the month. Use the clicky!