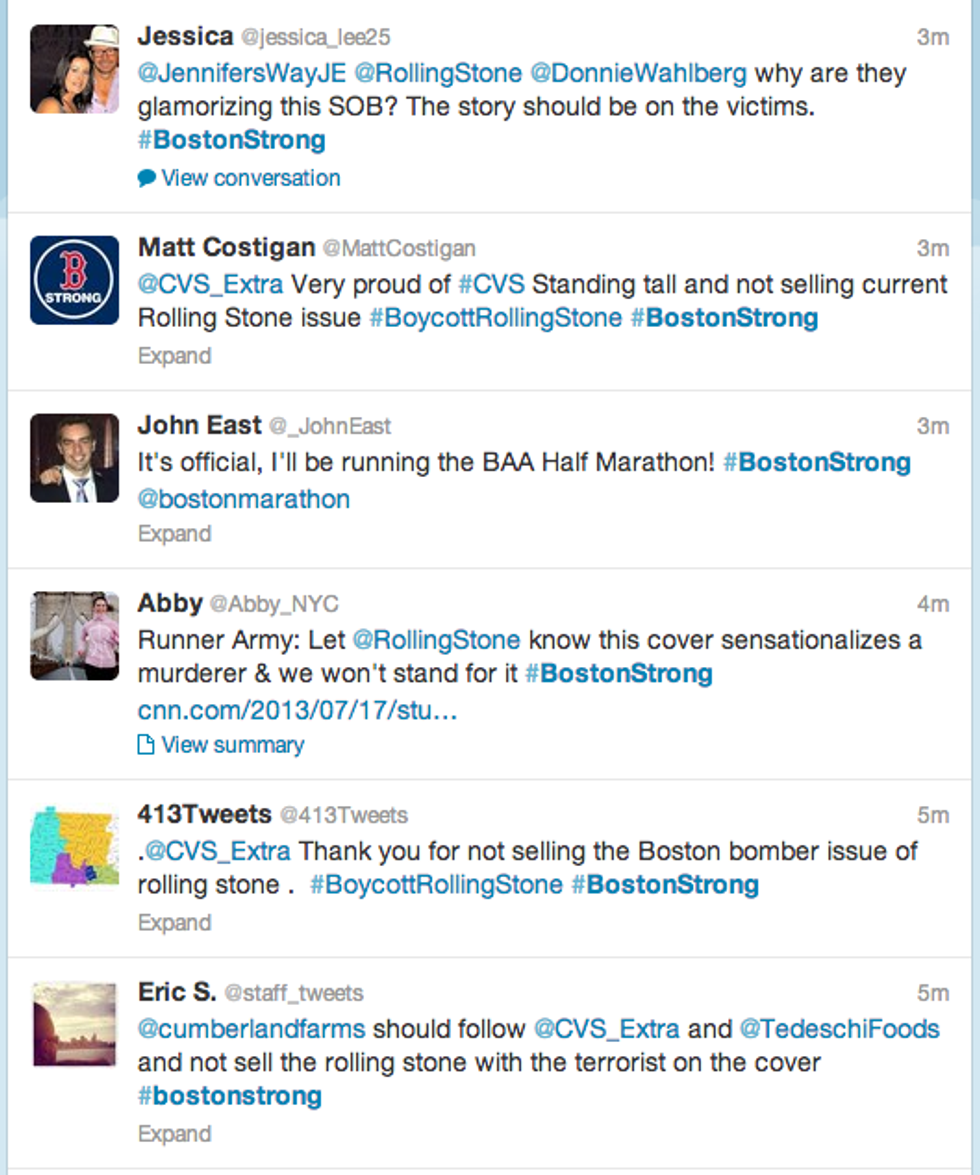 Everyone is up in arms over this Rolling Stone magazine that seems to be the cover art from an album by some exciting young folk musician. Especially up in Boston. What, did he say Aerosmith sucks or something? Let us read about this guy and his awesome brand of...oooooh, we get it.

Listen, Boston? You were pretty great after that dumb fucking terrorist decided waaaah I don't like something I guess I will use this heretofore beautiful day to go out and kill and maim a fuckton of people! (Terrorists say "heretofore" a lot.) But then something terrible happened: a music magazine that's actually been more notable lately for its political writing than for covering whatever Katy Perry or Cee Lo have been up to wrote an in-depth story about the dumb fucking idiot mentioned above, and -- UH OH! They put his pretty picture on the cover of the magazine! It would be easier if he had that eau de spiderhole, we guess, but sometimes evil is pretty. And maybe that's something we should remember as well.

And now you have all turned into chapped, battered pussies banged into submission.

We shake our heads at you, Boston. We. Shake. Our. Heads.

Here are some people bitching and whining about the "glamorizing" of a murderer, and Rolling Stone's "support" for terrorism.

We have not read the article in question -- we've been "busy," or something, we're sure it's quite good! But by all means BOYCOTT!!!1! the MEDIA!!1! for trying to explain about a thing that exists -- in this case that fucking idiot and "how he became a monster." That does sound pretty supportive!

We remember after 9/11, because of how we are 672 years old, when any kind of discussion or examination of the terrorists' motivations was considered a hangin' offense -- because the correct answer is "evil," and "Satan." Which are fine motivations, to be sure, but there might also have been some geopolitical agendas in play as well.

We also remember having the SAME discussion for every kid who picked up a rifle over the past year and went off to kill some kindygartners. HOW COULD THE MEDIA give them the fame they were after? Shouldn't we have just showed them in shadow or something? Why were we printing their names? Why would we try to examine how regular kids had become ... what's the word ... "monsters"?

Oh well, we can probably just blame Amanda Palmer for this one too.

The Boston that emerged from the bombing was fucking badass, with people running to the rescue and singing Sweet Caroline all the fucking time. That was cool. We would like the badass Boston back, because this new, whiny-ass Boston sucks balls.