Eric Trump With Perfect Defense: Donald Trump Too Greedy To Be Racist! 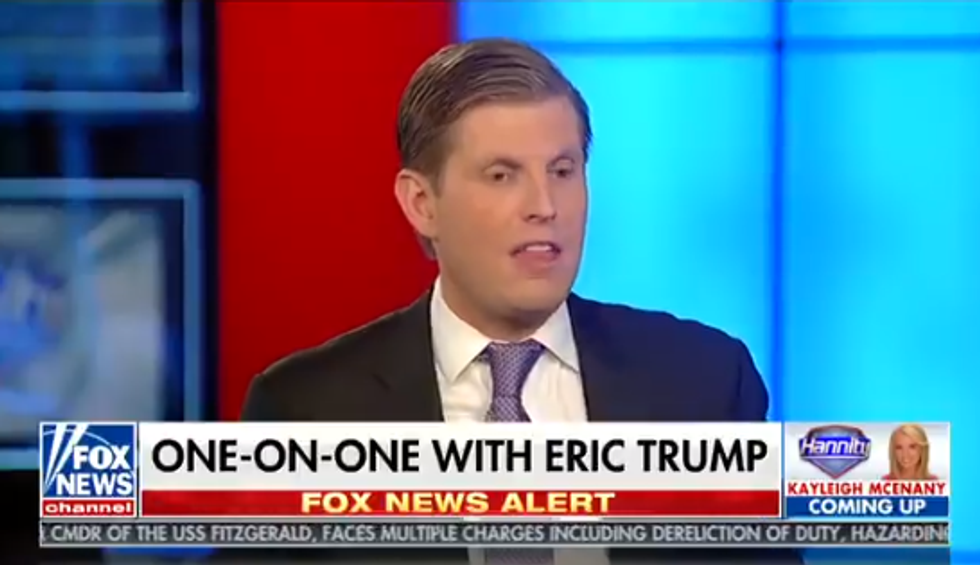 Everybody has thoughts about Donald Trump's bigly healthy meat swamp body ever since White House doctor Ronny Jackson gave Trump a clean bill of health -- the physical kind and the brain kind -- in Tuesday's White House briefing. (Blink twice if they're blackmailing you, Ronny!) Wonkette says LOL fuck you, Trump is not 6'3" and 239 pounds (which is CONVENIENTLY just one pound off from an "obese" rating for a 6'3" man). Either he is more like six feet tall and 239 pounds -- or he is HIPPOPOTAMUS POUNDS and all these people are full of shit. Also, if fucker is not in the early stages of dementia, holy shit, that means this is what he's like when he's "sane."

Jonathan Chait at New York mag says FINE, RONNY (SURE, JAN), we'll take the doc at face value and accept that President Beef Poots is in good health and has a good brain, and notes that this just means Trump is a bigger fucking moron than we previously understood. Scary!

Meanwhile, Fox News's Brit Hume, whatever he actually thinks about Trump's health, wants to reassure us he is NOT FANTASIZING ABOUT THE PRESIDENT'S PENIS RIGHT NOW. All righty, sir! We'll just step away slowly and let you have some private time!

But somebody else has 'pinions, yes they does! And it is Eric Trump, the second stupidest Trump child, who went on Fox News Tuesday night and this morning to say Daddy has the best brain and the best body and Daddy isn't racist because he only sees the color "green" and the media is unfair because it is (((run by only six people in New York and Los Angeles))).

FOR REAL HE SAID THAT.

Let's start with clips from Eric T.'s appearance on "Hannity." (Many thanks to Aaron Rupar from Think Progress for tweeting all these videos last night while we were falling asleep during Maddow, like we do sometimes!)

Here's the one where Eric says Daddy has never even had a cold in his whole entire life, and also that Daddy is incredible, just incredible:

Eric Trump slams lazy journalists for even questioning his dad's health, claims that he's never seen his dad sick before.

"First of all, I've never seen the man with a cold... I mean, the guy is incredible." pic.twitter.com/uqG7mAUkDI

Here's the one where Eric says Daddy has been such a successful president he's allowed to eat all the ice cream and watch all the TV he wants, and you know why? Because Donald Trump IS Eric Trump's real dad!!!!

HANNITY: "You see the economic boom that is unfolding before our eyes, and they [the media] are upset that a president is healthy."

ERIC TRUMP: "You know, with that result, watch as much TV as you want, eat as much ice cream as you want." pic.twitter.com/2C5HYyLVtc

Here's the one where Eric says "the media" has low approval ratings, unlike Daddy, who has ... well never mind, THE MEDIA SUCKS! Also, Eric Trump says CNN's ratings are "ZERO," which is ... not how ratings work.

Ombudsman @EricTrump blasts media for their "low approval ratings" -- who wants to tell him about his dad? -- and wonders why CNN devotes so much coverage to the president's racist comments, when they could be covering the stock market instead. pic.twitter.com/DXvYl27FRN

UH OH, HERE'S A FUN ONE! We will actually transcribe it for ya:

And now, the last one from "Hannity," is the one where Eric T. says his little brother Barron is 12, mere seconds after Hannity says Barron is 11. (As Aaron Rupar from Think Progress notes -- again, thank you for tweeting all these videos! -- Barron is 11.)

ERIC TRUMP doesn't know how old his brother BARRON is.

ERIC: "It's almost the worst of humanity, you don't go after a 12-year-old child."

Hooray, good "Hannity"! Daddy was surely watching and now Eric won't have to sit at the kids' table next time the family has a holiday and ... wait, what's that, Ivanka? You're giving Eric's seat at the grown-up table to your ALLEGED Chinese spy friend Wendi Deng Murdoch? Better luck next time, Eric!

OK, now let's look at Eric Trump on the "Fox & Friends" idiot couch. Did he try to defend his good Daddy with the good brain and the best chunk body against charges of blatant racism, considering how it's a 100% provable fact that Daddy is racist? SPOILER, he did! And also spoiler, he did not make it better. :(

In what world was this a good thing to say?

"My father sees one color, green. That is all he cares about. He cares about the economy. He is least racist person I ever met in my entire life." pic.twitter.com/yVh19jNIqn

My father sees one color, green. That is all he cares about. He cares about the economy. He does not see race, he is least racist person I ever met in my entire life.

See? Trump is a greedy shithole trash human who only cares about money. And if refusing to rent to black people or not letting people from "shitholes" immigrate to the United States is damaging to that goal -- like, can they even afford Mar-a-Lago memberships? -- then FUCK YOU, MINORITIES, Daddy's looking at his BOTTOM LINE.

Eric Trump, you are a fucking idiot and your face is ALMOST as weird as your big brother's face and you probably shouldn't talk ever.

OK, that is enough Eric Trump on TV.

But remember how we said above that Eric Trump is still the second stupidest Trump kid? It's not just because First Stupidest Donald Trump Jr. is so slobbery for Daddy's approval he held a Russian treason meeting and sexted with Wikileaks during the campaign. It's also because he, too, commented on the results of Daddy's physical, and he's so stupid he thinks this meme he posted on Instagram is a GOOD MEME:

Watching media trying to ask the Rear Admiral Jackson (The White House Dr appointed under Obama) questions in ways that leaves an opening to attack @realDonaldTrump's health after an amazing report, cognitive & otherwise, is like watching Dumb & Dumber. What are the chances he’s sick? One in million "So you're saying there's a chance! Whooo Hooo!!!” We need to test them for #trumpderangementsyndrome

Bless both of these boys' souls, as this is what happens when Donald Trump's sperm is half of your genetic make-up.

Do you enjoy Wonkette? Then you should give us some money.