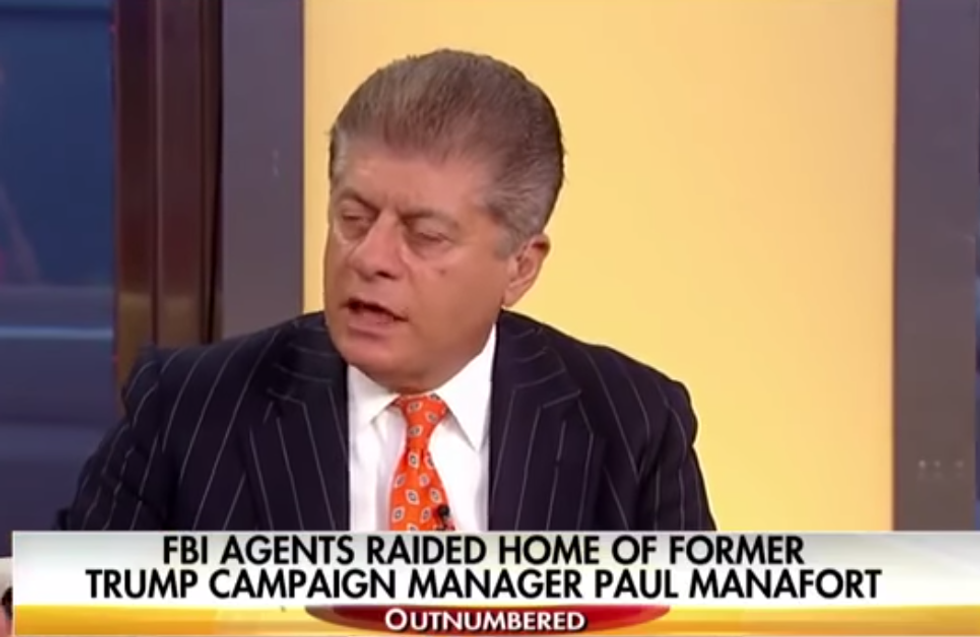 This is the Fox News "WHOA IF TRUE" face.

A pre-dawn FBI raid on the home of someone represented by competent counsel. To lawyers, it's very telling. When you want evidence from a drug dealer, you go to a federal judge at three in the morning and tell them, "There are the drugs. If we don't get them in the next half hour, they're gone!" [...]

So the fact that Paul Manafort is represented by very competent counsel tells me that an FBI agent or a team of agents went to a federal judge and persuaded the federal judge there is probable cause of crime in the place to be searched, his home, or the things to be seized, computer, data and documents ... and we don't trust him to give them to us, and we don't trust him to preserve them, or his OWN LAWYER is telling us he can't control his client. That is very damning for Manafort and for the president. And it comes at the same time the president is starting [to think] "I better take this more seriously. [...]

I have issued so many search warrants. When they come to you for a search warrant, they have to tell you they can't get this by any other means, and it is likely to be destroyed or removed, and we need this AWESOME POWER, literally breaking down a door of a white collar person at 5:30 in the morning, we need this awesome power, and we need it now. That tells me there is a THERE there.

After Napolitano said those true things, the panel FOXED IT ALL UP by expressing how worried they were that special counsel Robert Mueller is going after all of Manafort's possible crimes to try to get him to flip on Donald Trump, which, while obviously true, is NO FAIR. But guys, we gotta let Fox News take its baby steps.

We guess when the FBI shows up before the sun opens up its peepers and knocks on Trump's campaign chief's BEDROOM DOOR and tells him to GTFO while they raid his place, that lends credibility to this whole Trump-Russia Witch-Hunt Hoax Investigation for the Fox News kids.

OOH SEXXX SCANDAL! Is it even remotely true? NO IDEA!

You all remember how Trump's BFF David Pecker owns the National Enquirer. The tabloid rag for ignoramuses often does Trump's bidding, like when it buried a story about a Playboy model saying she had an affair with Trump, or when the White House pervily begged Joe and Mika Scarbrzezinski to stop being mean to Trump, and in exchange they'd kill the big salacious story the Enquirer planned to publish on them.

As Rachel Maddow notes frequently on her show, as weird as it is, the pages of the Enquirer are often a helpful window into what Trump is thinking.

One reason why Trump may be ready to murder all memory of his former pal Paulie, besides how he's in Mueller's crosshairs, is that we've learned recently, from an ACTUAL news source (Bloomberg), that he was the one who squealed to authorities about Donald Trump Jr.'s little Russian conspiracy meeting.

Thursday afternoon, Trump took a brief break from lying in the middle of his golf course in Bedminster and eating KFC wings out of his cavernous belly button to answer a few reporters' questions. About Manafort, Trump said he was only on the campaign for a "short period of time," that he hasn't talked to him in FOREVER, and that he and Manafort "haven't really been involved." (Factcheck: Trump has known Paul Manafort since the Studio 54 days and Manafort lives in Trump Tower. Jesus Christ.)

In an email to the Journal at 3:48 a.m. Eastern Thursday, Mr. Dowd sharply criticized Mr. Mueller for what he called an unnecessary move.

“This extraordinary invasive tool was employed for its shock value to try to intimidate Mr. Manafort and bring him to his needs [sic],” wrote Mr. Dowd, a veteran Washington lawyer and one of the main outside attorneys representing Mr. Trump in the Russia investigation.

It's OK, honey. Who among us hasn't drunk emailed the Wall Street Journal in the middle of the night to bitch about how the FBI is treating somebody who isn't our client? Also, what a contradictory statement to be published in the WSJ around the same time Trump is saying he hardly knows this Manafort fellow. Maybe Trump and his lawyers should get their stories straight.

Speaking of lawyers, Manafort has a new one, who specializes in all kinds of sexxxy financial crime and tax fraud, which seems appropriate. Robert Mueller has reached out to Manafort's son-in-law, and Bloomberg reports that he's even contacted one of Manafort's Ukrainian oligarch pals, in his efforts to make all the walls close in around this guy Donald Trump hardly knows. This is on top of the one million subpoenas Mueller is signing, to get access to the real story of Manafort's money.

In short, shit is getting real!

We'll update this post later when Trump finishes throwing Manafort under the bus by accusing him of doing Benghazi with Hillary Clinton.

Wonkette salaries are fully funded by lovely folks like you! If you love us, click below to pay our salaries!