Ever Had A Baby? Pay An Extra $17,000 Per YEAR For Healthcare, Because Barack Obama Is Black 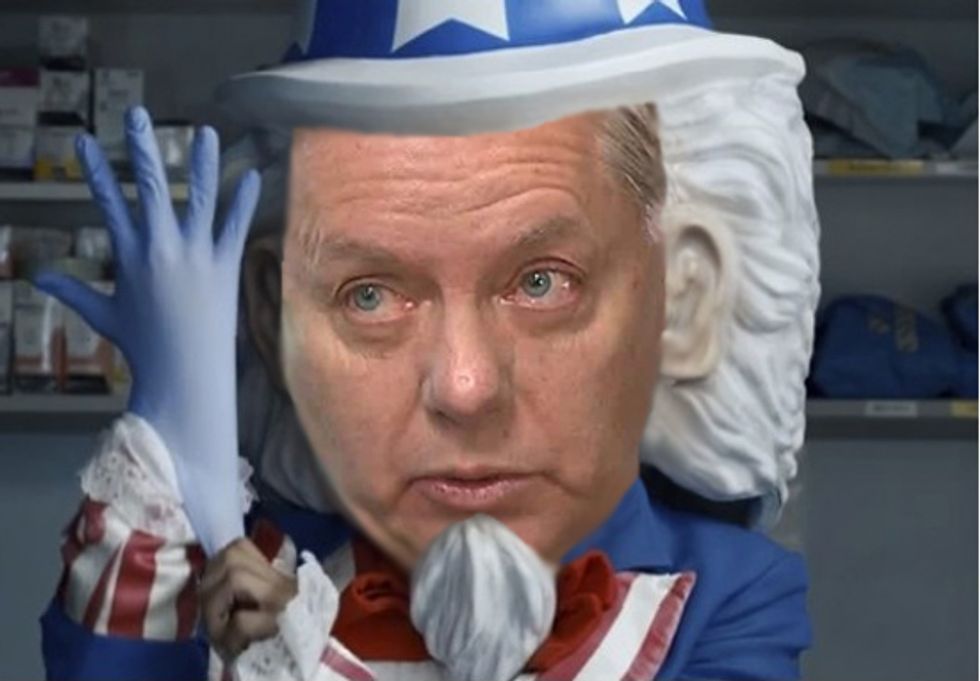 Hope we won't need to use this one much...

Lindsey Graham and Bill Cassidy have simply had it with all of the liberals' mean, lying lies about the Graham-Cassidy plan to kill the Affordable Care Act and replace it with a system of block grants that will allow states to try to put together their own healthcare systems, or not, at least for the six years before the ever-shrinking block grants exist before ending in 2026. And poor Bill Cassidy is really upset that Jimmy Kimmel said such mean things about him, because he's very sure his bill still passes the "Jimmy Kimmel Test," at least as Bill Cassidy is now defining it. (The earlier, pre-Graham-Cassidy definition was "would this bill provide insurance that would cover a seriously ill baby no matter how much money the parents make?") Here's a remarkably news-filled three minutes from NBC's Kasie Hunt:

Help Obamacare, Jimmy Kimmel, You're Our Only Hope!

This Graham-Cassidy Obamacare repeal is the worst one yet. Help make it so IT SHALL NOT PASS.

Does the bill pass the "Jimmy Kimmel Test"? Well of course: "Yes. There will be people in states like..." and here Cassidy gets lost, trying to remember one of the red states that'll cash in on the redistribution of funds from states that had passed Medicaid expansion (Louisiana is not one of them). As to Kimmel's assertion that Cassidy had lied about Republicans' commitment to cover everyone, well, says Cassidy, that's just a "personal attack." Then it's back to the wonderful benefits for states that never expanded Medicaid, and what's more, Cassidy insists, "We have protections for preexisting conditions." Lindsey Graham can't stand to see a good decent insurance-eliminating man like Cassidy slurred, so he says Kimmel was just listening to "liberal talking points that are absolute garbage," and that led Kimmel astray. Then, after accusing Kimmel of lying, Graham lied, saying we have to eliminate Obamacare since it's "collapsing" (No. It isn't).

Hunt then pointed out, "But states would be able to not cover people with preexisting conditions --" A very angry Graham interrupted her:

Maybe it's coming from the Graham-Cassidy bill? Cassidy went on to explain to the dumb lady reporter that while states can apply for waivers, they would have to make sure that people with preexisting conditions have "access to adequate and affordable coverage" -- terms that the bill conveniently doesn't define. And we all know what Republicans mean by "access" to care: If you have enough money, you have access. If you're poor, you'd better make more money to get access.

"You could stretch the definition pretty broadly of what counts," says Sloan. "Maybe you fund a high-risk pool that only allows in some number of people, and that counts. It's a pretty wide space."

What's more, that language does not outlaw discrimination against sick patients. An individual with a history of asthma, for example, could see health insurance plans that want to charge her 10 percent more because they expect she'll have higher health care costs.

Always willing to be helpful, the AARP highlighted exactly which part of the bill would allow insurers to jack up rates for preexisting conditions:

Oh, yes, and states would also be free to eliminate the ACA's requirement that insurance plans cover essential medical benefits like mental health care, maternity care, women's health services, ER visits or hospital stays, and other stuff that makes insurance kind of expensive. That will lead to a proliferation of "affordable" junk insurance plans that don't cover much of anything.

That means Graham-Cassidy would also put your insurance at risk if you get health insurance through your employer, and that's not only because it eliminates the employer mandate. Even companies that provide insurance could start providing far crappier insurance: Here's why, as explained by the Brookings Institution.* The ACA's ban on annual and lifetime insurance caps applies to the essential health benefits defined by the ACA. Get rid of the requirement that all insurance cover essential health benefits, and not only have you opened the door to employer-based insurance plans deciding they won't cover, say, mental health or women's health services, but you've also eliminated the ban on annual and lifetime caps for services.

So even if you're Jimmy Kimmel and you have insurance through your job at ABC, it's possible your insurer or employer might decide once your son's heart defect has cost a million dollars to treat, then the baby doesn't get any more coverage. Lucky thing Mr. Kimmel lives in a state that won't toss out those protections, and works for a company that's unlikely to slash benefits. But other states and companies will almost certainly decide that's a terrific idea to make insurance "affordable."

Nope, having insurance through your employer won't necessarily protect you from the changes that Graham Cassidy would make to health insurance. It's an insanely radical plan, and we can't let it pass. Light up the phones, people, even if you know your own rightwing senator isn't persuadable and will definitely vote for this monstrosity. They need to hear from us, because Congress is a herd animal. And Democratic senators need to hear from us to get the courage to slow down everything in the Senate until the reconciliation deadline expires September 30.

* The analysis here was written about an earlier waiver measure, but Graham-Cassidy adopts the same approach to letting states define benefits.

Yr Wonkette is supported by reader donations. Help the resistance and click right here to keep us yelling at these bastards.