Everybody So Mean To Poor, Criminal Wells Fargo. Thank God Mitch McConnell Is Making It Right! 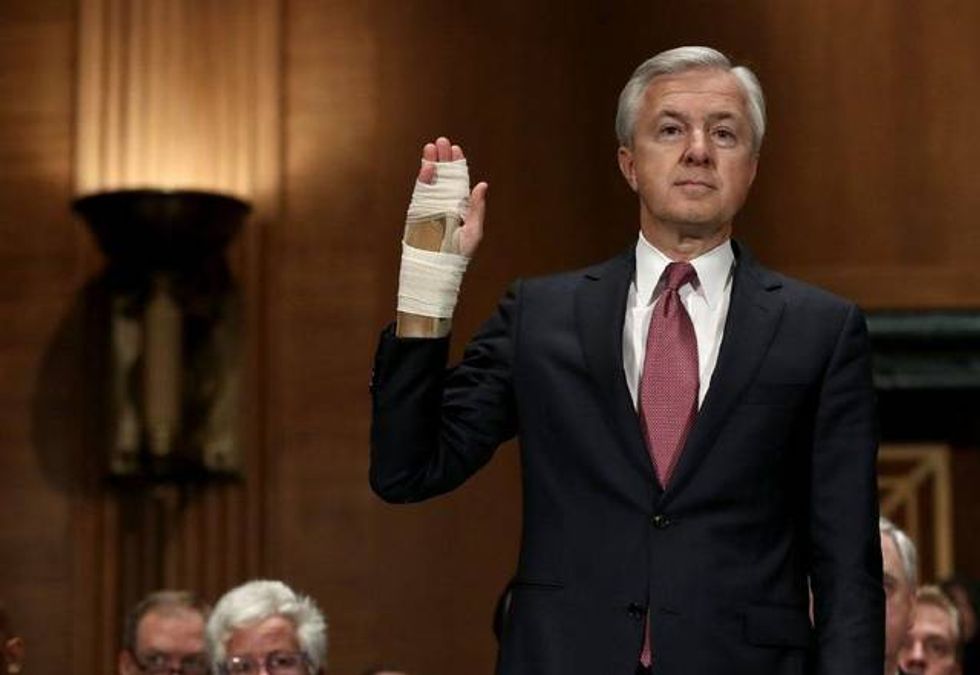 It wasn't long ago when Wells Fargo purged its payrolls of industrious retail bankers who opened up unauthorized accounts for their customers. Following government investigations, Wells Fargo, which totally didn't know about any of this, they swear, fired thousands of culpable employees and forked over $185 million in fines to state and federal governments.

“You should resign. You should give back the money you took while this scam was going on and you should be criminally investigated,” Warren told Stumpf, a man who could drown a bellhop in a bathtub of discarded debit cards and never see a day in prison.

Warren was particularly pissed Wells Fargo pushed its (inn Stumpf's words) "well-paid" bankers making $30,000-$60,000 annually to meet unrealistic internal sales goals by preying on people who didn't need that home equity loan. The primary goal? To sell each customer at least eight financial products, whether they needed them or not.

“This just isn’t right,” Warren said. “You squeezed employees to the breaking point” to drive up the stock price and your compensation, she said, referencing the bank’s fierce drive to “cross-sell” or make customers open up multiple accounts. “You went on television to blame thousands of $12-an-hour” workers.

Senator Warren goes all populist on the Creators and next thing you know, the decent Wells Fargo employees get some interesting ideas. Two class action lawsuits -- federal and state -- against their terrible employer are moving forward.

The [suit] was filed in Los Angeles last week by former Wells Fargo workers who say that while their colleagues created unauthorized accounts to meet cross-selling quotas, they were penalized or terminated for refusing to do the same.

In the end, the real victims here are not the terminated employees, the honest employees, or the customers who incurred fees for accounts they didn't want. The victim is CEO Stumpf. Stumpf forfeited $2.8 million dollars in salary and was also Stumpf'd out of $41 million in unvested securities, leaving the embattled executive with a paltry $247 million in Wells Fargo stock.

So Wonkette, why are you still piling on Wells Fargo? Aren't there other bad corporate actors at whom we can direct our righteous Lib-dignation?? Sure. But you know what? Fuck Wells Fargo.

Here's what they did -- and be sure that no upper level executives condoned or tacitly approved this decade-long behavior, or otherwise fluffed those responsible with bonuses. The only bucks that will stop with Strumpf and company are gigantic balloon payments when they're forced to step down for PR purposes.

Sounds like a Hollywood ending, only the exact opposite. The bank was fined $20 million more for breaking additional rules designed to protect military families! This includes a failure to cap their interest rates at 6%. According to the Office of the Comptroller of the Currency, those violations began in 2006. But I'm sure they would've eventually gotten around to discovering this and doing the right thing.

Say what you want about Wells Fargo preying on military members, but I bet it stands for the National Anthem at football games. Heck, the Corporate Person probably sponsors it. And isn't that what's most important?

With all this bad news for Wells Fargo, will mounting outrage cause a gigantic overhaul in behavior? Is it possible we'll be looking at the elusive criminal charges for white collar thieves?! Nahhhhh...

Because never fear, Wall Street: your loose-skinned whitest knight is here to help and obstruct that dastardly Elizabeth Warren and her evil Consumer Financial Protection Bureau.

Last week, Republicans on the House Financial Services Committee approved a bill designed to hamstring the CFPB. Senate Majority Leader Mitch McConnell (R-Ky.), who is married to Wells Fargo board member Elaine Chao, is attempting to push a bill with similar terms through the Senate.

Always on the right side.