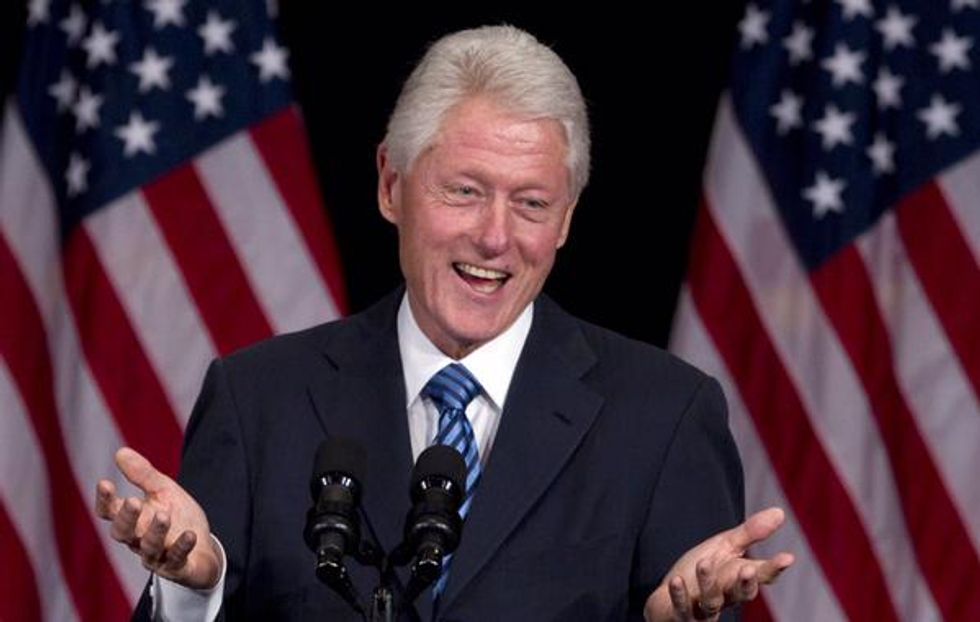 Not that he can blame you

It's a good thing Hillary Rodham Clinton (D-Wife of Bill Clinton's Penis) is running for president, or else we'd be forced to find creative ways to mention Bill Clinton's penis and all the various no-no holes it has been inside of. Ever since he left office, it's been hard (like a dick, get it?) to figure out how to insert (like a dick, GET IT?) the former president's member into conversation. Which hasn't stopped anyone from trying. (Good job, Maureen Dowd!)

But now that the former senator and former secretary of state is running for the highest office in the land and blah blahing all the time, all over the place, about her Girl-spot, it's irresponsible not to talk about everyone's favorite penis. Tell us why, "liberal" Washington Post columnist Ruth Marcus:

Ordinarily, I would argue that the sins of the husband should not be visited on the wife. What Bill Clinton did counts against him, not her, and I would include in that her decision to stick with him. What happens inside a marriage is the couple’s business, and no one else’s, even when both halves crave the presidency.

Hillary Clinton has made two moves that lead me, gulp, to agree with Trump on the “fair game” front. She is (smartly) using her husband as a campaign surrogate, and simultaneously (correctly) calling Trump sexist.

These moves open a dangerous door. It should surprise no one that Trump has barged right through it.

[contextly_sidebar id="nvCytpipfbppuzrJGc4kZxBS6lLVrJ2r"]It makes perfect sense when you look at it that way, so long as you've also taken a whole metric cockload of acid first. Since Hillary "Doormat" Clinton unforgivably forgave her husband for doing stuff with his penis, and she has the audacity to let her spouse kiss the babies and the butter cow on the campaign trail like every other presidential candidate in history (except for Lindsey Graham because he doesn't have a spouse but he DOES have a sister EWWWWWWW), and she has observed (along with the rest of the sentient beings in this galaxy) that Donald Trump is a gross nasty sexist pig, Hillary Clinton started it, and it's her fault for forcing Trump to bring Bill's Big Dog into this, by being married to him.

Oh sorry, you probably didn't take quite enough acid for that, did you?

[contextly_sidebar id="Ui4pLnKwJluywEXgrGBOzTCcH8HgEHbq"]At least Hillary has radical feminist Rand Paul to stand up for her:

I don’t think it’s Hillary’s fault that her husband had serial infidelities.

Awww, that's chivalrous of him. And he's been not blaming Hillary's frigid lesbian vagina headbands for her husband's extramarital sexytimes for almost two years, so you know he means it. No, seriously, you guys, stop talking about that some more.

At least sisterhood is powerful enough that fellow genderista Carly Fiorina isn't going to sink to that level:

Haha, just kidding, Fiorina is fucking awful and terrible, just like a man. Still, Fiorina added that the best way to beat Hillary Clinton is by calling her an incompetent liar who did Benghazi to all the unborn babies. Sure OK whatever, isn't it time for you to be making your graceful exit from the race now, Ms. Fiorina? Or does someone need to tell you failing at running for president doesn't come with a bazillion dollar golden parachute?

The bottom line is that Hillary's run for the Oval Office means we can finally, in the name of "politics," return to our never-ending national obsession with Bill Clinton's dick, hooray!