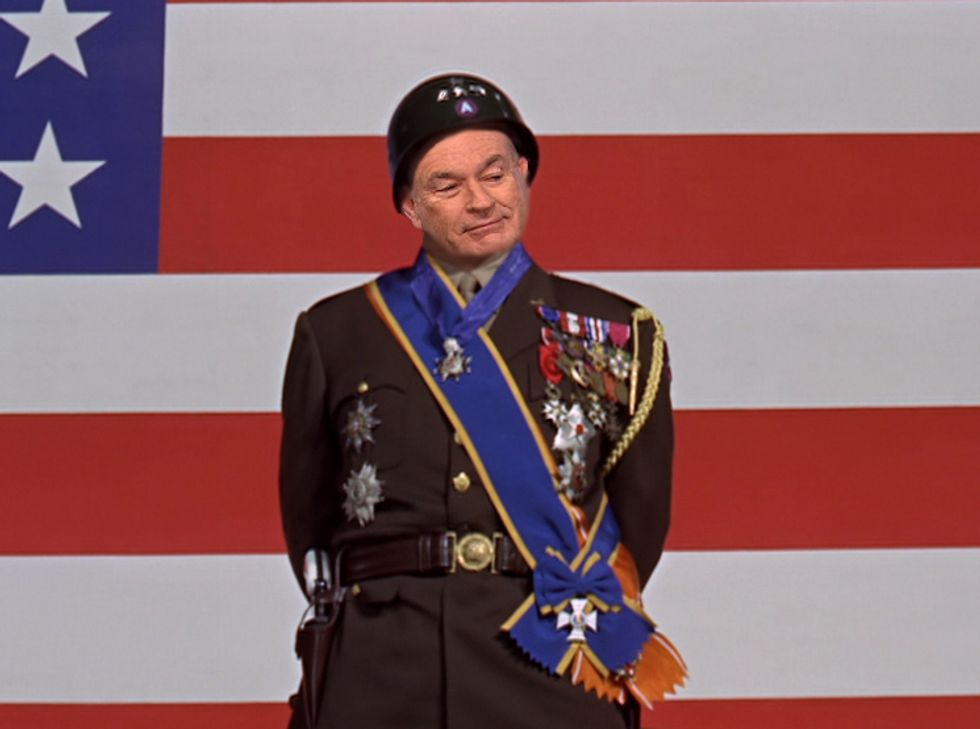 You guys, this is really serious: It appears that virtually everyone from CBS who worked with Bill O'Reilly when he was bravely reporting on the Falklands War in 1982 is a vicious smear artist who just wants Billo to look bad! You see, Bill had said that he'd been a war correspondent and witnessed combat during the Falklands War, but then those meddling kids at Mother Jones went and pointed out that no reporters were allowed on the Falklands, and Bill had been in Buenos Aires, Argentina, over a thousand miles away.

Billo had an answer for that: He'd covered the riots that erupted after the Argentinian defeat, and in one terrifying episode, the Army shot into the crowd, and Bill had to save his injured cameraman's life as the soldiers pointed guns at their heads. So, yes definitely combat!

Except that even Billo's revised story is refuted by the other CBS reporters who were there. CNN cited seven former CBS staff who said that O'Reilly's account was not accurate, and two other reporters have also come forward to contradict O'Reilly. It's one hell of a conspiracy to smear Bill O'Reilly, the only honest person who was there.

The best account is by former CBS newsman Eric Engberg, who takes apart O'Reilly's version of the events with a detailed account that leaves the distinct impression that O'Reilly in 1982 was already a self-aggrandizing asshole, if you can believe that. Engberg even thinks it's a stretch to say that O'Reilly (or any of the CBS staff stuck in Argentina) was "covering" the war:

We were in Buenos Aires because that's the only place the Argentine military junta would let journalists go. Our knowledge of the war was restricted to what we could glean from comically deceitful daily briefings given by the Argentine military and watching government-controlled television to try to pick up a useful clue from propaganda broadcasts. We -- meaning the American networks -- were all in the same, modern hotel and we never saw any troops, casualties or weapons. It was not a war zone or even close. It was an "expense account zone."

Engberg notes that O'Reilly arrived shortly before the Falklands fell, and that once the war was lost, people in Buenos Aires were furious, "driven into the streets of their capital by rage over the loss of a war they had been repeatedly told their army was winning." He says that there was, in fact, a bit of a riot near the presidential palace. In contrast to O'Reilly's claim that he was the only reporter who was brave enough to go and report on the chaos, Engberg says that everyone on the CBS team had been out and reporting. Further, he says O'Reilly, directly ignoring an admonition not to turn on the camera's bright lights, which would make his cameraman a target for protestors throwing rocks or bottles, went ahead and told his cameraman to turn on the lights so he could do a stand-up in front of the crowd. The footage never aired but did endanger him and the cameraman. When Larry Doyle, the CBS bureau chief, saw the footage, he chewed O'Reilly out for violating the safety rules.

To make matters worse, O'Reilly complained that his wonderful stand-up wasn't used for the evening news:

As always the Buenos Aires bureau had no combat video footage to offer, so our part of the special would be the demonstrations, which had been well covered by three or four camera crews, including the one working with O'Reilly. All that footage was blended into the main story, narrated by [Bob] Schieffer, who had been in Buenos Aires for weeks as the anchor on the scene. When Doyle informed O'Reilly that Schieffer would be doing the report, which would not include any segment from O'Reilly, the reporter exploded. "I didn't come down here to have my footage used by that old man," he shouted. Doyle was stunned. First O'Reilly had defiantly ordered a cameraman to disregard his orders on using lights, and now he was claiming the right to do a story the producers had decided should be done by the senior correspondent on the scene, Schieffer. This confrontation led the next day to O'Reilly being ordered out of Argentina by the CBS bosses. Doyle had told them O'Reilly was a "disruptive force" who threatened his bureau's morale and cohesion.

And no, there was no footage of police or army forces firing live ammo into the crowd. (There were reports of rubber bullets, but no film.) Nobody from CBS remembers an injured cameraman, let alone O'Reilly rescuing anyone. The CNN story identified the cameraman who worked with O'Reilly as Roberto Moreno, who declined to be interviewed, but the office manager for CBS in Miami at the time, Mia Fabius, said that Moreno had never mentioned being injured. Jim Forrest, a sound engineer, said O'Reilly's claims of multiple deaths were bogus -- "There were certainly no dead people ... Had there been dead people, they would have sent more camera crews." Now that's a man who knows how network news works!

Even so, one New York Times account from the time mentioned a policeman who "pulled a pistol, firing five shots over the heads of fleeing demonstrators."

In Mother Jones, David Corn notes that O'Reilly actually cited that account as proof that he'd been telling the truth about all the civilians being shot and killed. Just one teensy problem with how O'Reilly used the Times story on Fox News's MediaBuzz Sunday:

As O'Reilly read from the Times story, when he reached the line about a cop "firing five shots," he omitted the rest of the sentence: "over the heads of the fleeing demonstrators." He jumped straight to the next sentence, hoodwinking the audience, for with this selective quotation, he had conveyed the impression that at least one cop had been firing on the protesters.

Details, details. There was gunfire, wasn't there? And those bullets came down somewhere, didn't they?

While not nearly as much fun to read as Engberg's first-person recollections, Media Matters also interviewed Charles Krause, a second former CBS reporter who'd been in Buenos Aires. Krause had been reporting from Argentina for three years prior to the war, and says that O'Reilly is -- you guessed it -- wrong. Krause agrees with the staffers interviewed by CNN -- there was a protest, but hardly a violent riot, let alone "combat":

"There's a difference between demonstrations and rioting," Krause said. "I don't recall there being rioting, there could have been scuffling."

Not surprisingly, Krause also doesn't recall any CBS cameraman being injured and bleeding. He does at least acknowledge that, for American reporters like O'Reilly who didn't speak Spanish, venturing out of the hotel might have been a little scary:

"The only danger that we were in was we were staying at the Sheraton Hotel, which was this massive, modern tower overlooking the city. We were in no danger whatsoever," he said.

OK, but maybe O'Reilly could have rolled down a hill or something.

Fox News issued a statement Sunday saying that CEO Roger Ailes and top management are "in full support of Bill O'Reilly," which is nice of them.

And while it's clear that Bill O'Reilly is the greatest victim here, let's also take a moment to offer our sympathies to Sen. Al Franken, who has to be going slightly stir crazy knowing how much fun he could have with Billo's war stories, but who also knows full well that, as a Senator, he's just going to have to smile and, at most, mention that he's familiar with Bill O'Reilly's record as a prizewinning journalist. But we wouldn't be surprised if we learn in a few years that he's called Eric Engberg to give him an "attaboy."