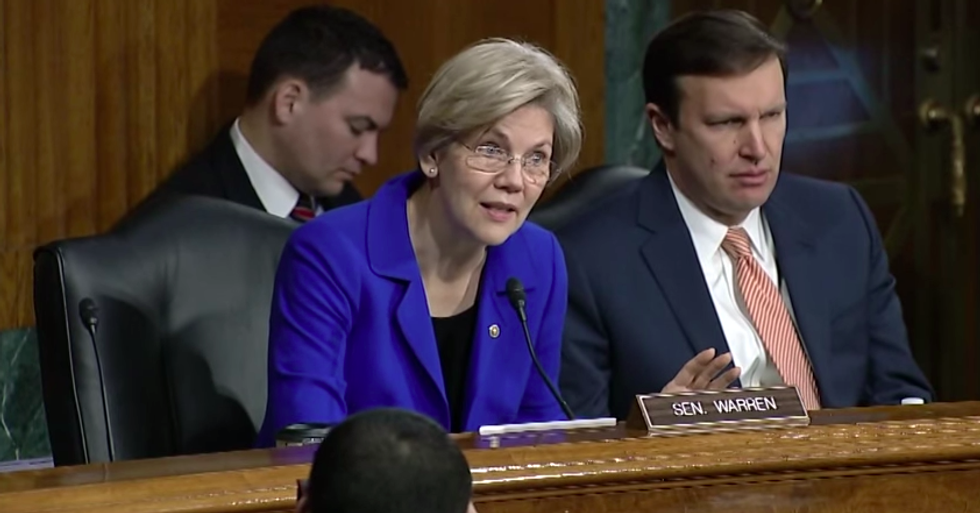 Who is the greatest? ELIZABETH WARREN! And who is getting flying flaming shit arrows from all sides this week, whether from the purported head of the Democratic Party (who you could say with an almost straight face "leans" Clinton) or from a thousand whiny Bernie Sanders fuckbabies on Facebook? ELIZABETH WARREN! And what are we going to do about it? WE ARE GOING TO BOMB HER WITH LOVE.

First up (surprise), Debbie Wasserman Schultz, the head of the Democratic National Committee, is being an asshole again! Wasserman Schultz hasn't been making a lot of friends this cycle with her somewhat glaring impartiality in the presidential race (even among Hillary Clinton supporters), but now she's joining with a bunch of dick Republicans to go after Elizabeth Warren's Consumer Financial Protection Bureau. They're the ones who say, "No, payday lenders, you may not actually charge the blood of a firstborn son, that is Rumpelstiltskin only." Or, "No, scammy car dealership people, black people have to pay the same rate as white people, we are sorry to ruin the Free Market with our communist tyranny, oh wait no we are not, STOP BEING RACIST AT CAR LOANS and go be racist at your grandson's nice girlfriend instead, we cannot regulate that because freedom."

So those are good things, and Elizabeth Warren fought alongside our President to make it happen even though Republicans SUPER tried to stop it from happening and would never vote to confirm anyone to head it, because they are schmucks, and now Debbie Wasserman Schultz is helping them, like, "hmmmm, maybe these mean rules are not necessary, let's just let them regulate themselves probably, because I'm a twat and I'm hateful." How hateful exactly? She's cosponsoring the "Consumer Protection and Choice Act," which joins the Healthy Forests Initiative and Operation Iraqi Freedom in its brazenly Orwellian amounts of go fuck yourself. The -- lololol cough cough CHOKE -- Consumer Protection and Choice Act allows states to set their own limits for how much they'd like to gently lave (heh heh Freudian as fuck whoops) and tenderly suck on the balls of payday lenders. In Florida, whose state laws regarding payday lenders DWS said were super totally great and awesome, the average interest rate for people with quick (lol "quick") payday loans is 304 percent.

Wait, how many percent?

We cannot imagine it helps Hillary Clinton to have the head of the DNC alienate one of the most beloved Democratic members of the Senate (and it's not like the mysteriously more popular Joe Manchin and Patrick Leahy have big followings outside Wherever the Fuck). Warren is also a senator whose endorsement Hillary desperately wants, so let's dispel with this notion that going after the CFPB is payback for Warren's not yet having endorsed Clinton -- although, fuck it, "not helpful" is pretty much DWS's MO, so maybe it is!

Still, Occam's Razor would suggest that Debbie Wasserman Schultz knows that a horse head is unlikely to persuade Sen. Warren to Hillary's side, and ALSO that Hillary has some credibility problems with her ties to the financial services industry, so she probably really doesn't want the head of the DNC ass-fucking poor people for PAYDAY FUCKING LENDERS OF ALL FUCKING SCUMBAGS, so it's probably just DWS being a disgusting grifter who needs to RESIGN NOW. Is $31,000 in donations (in 2013-2014) from payday lenders really enough to convince DWS gutting protections for consumers is a super peachy idea of greatness? We guess so, because the alternative is stupider.

But What About The Bernie Fans, They Are Being Awful Right?

Yes. You can go into a seven-hour Internet Black Hole and read every comment and FIGHT WITH THEM if you would like, but I love you and I already did that for you. (Yes, you cansend money in gratitude!) But why are the Berners mad at Elizabeth Warren? Because Bernie Sanders narrowly lost Massachusetts, and it is ELIZABETH WARREN'S FAULT, that is just science fact. After having signed a letter encouraging Hillary Clinton to run for president, Warren did not immediately turn around and say "OH NEVER MIND I WILL JUST FLIP FLOP ON THAT BECAUSE I AM SUCH A FAIR WEATHER FRIEND" and endorse Sanders instead, but has remained, for now, neutral in the primary race. And that is why a thousand somewhat overwrought voters will NEVER VOTE FOR HER AGAIN, and WILL REMEMBER, and SHE IS A SELLOUT AND A CREEP and other NOT NICE WORDS, because they are "registering their disapproval." Nah, hon. "Registering disapproval" is Anjelica Huston in The Royal Tenenbaums saying, "You're a smoker? Well. I think you should quit!"

"...all talk no action.greedy power hungry cowards.the revolution is coming. it could have been peaceful..."

Oh, can it and go join a militia.