Everything Is A Terrifying Nightmare 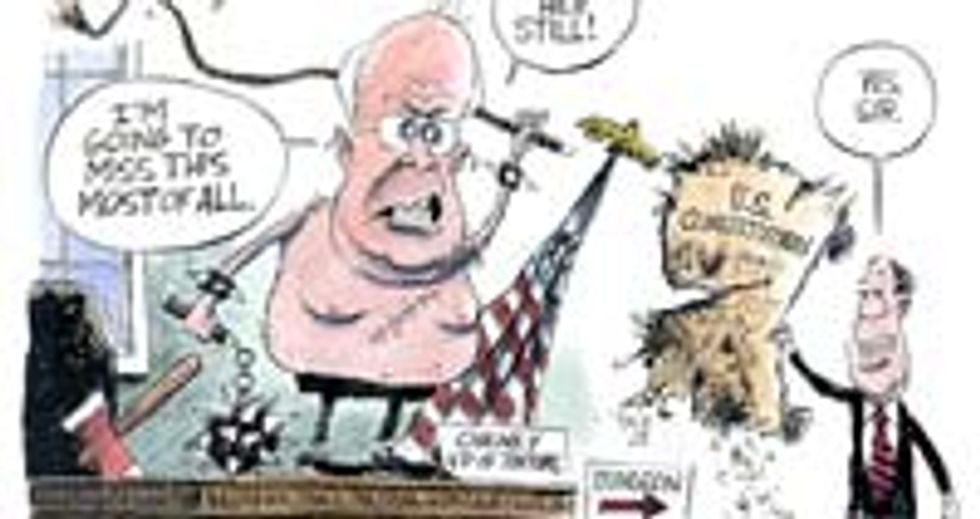 By the Comics Curmudgeon
Remember a couple of months ago, when everything was all Hope this and Change that and Yes We Can whatever, and you thought that everything was going to be all sweetness and light from here on in? FOOLS! Little did you know that the nightmare would just go on, forever and ever, like a never-ending mescaline trip. Brace yourselves for the horror show that launches 2009, with waves of human-animal hybrids and Dick Cheney's bosoms!

Click on the tiny comics to see them larger for FULL-SIZED HORROR.

Ha ha, remember when you thought that George Bush was just some smug Yalie legacy moron who got to be president through a combination of cheating, family connections and dumb luck, and then proceeded to fuck up the world? You were probably kind of bummed about that at the time, but now that you know he's actually a terrifying man-duck (muck? dan?), waddling about with his ghastly, fleshy head tottering at the end of his feathered neck, you're no doubt actively terrified. Even more traumatic are the mechanics of his reproductive processes, to wit: where exactly in his man-duck anatomy was that egg stored? And what orifice did he push it through?

Also, you have probably traditionally thought of Barack Obama as a tall, handsome, smooth-speechifying dude who inspired a generation and who will bring a new dawn of politics in America, right after he takes the oath of office on the Koran and then signs a treaty of alliance with the President of Terrorism. But in fact Barack Obama is a horse -- a sexy, jet-black horse -- with a hideously deformed human head. Most of what you've seen of him so far has been achieved with Photoshop and stunt doubles. Having been duly elected by the American people, the Obama-horse probably feels that at last he can reveal his true nature and be loved for who he is, but when he canters out onto the stage at the inauguration, his malformed appearance will be met with shrieks of terror and demands to brain it with a shovel.

Who benefits from all this? Dick Cheney, obviously. Since he, little known fact, actually is the only American who gets to decide who's president, America was more than willing for him to have the Bush and Obama monstrosities destroyed and assume power himself. "Sure, he's a shirtless sadist with floppy man-boobs and a terrifying cybernetic heart that orders him to kill," we all thought, "but at least most of his organic body parts contain only human DNA!"

In his first act as president, Cheney finally solves the immigration problem once and for all, by transforming the formerly svelte and welcoming Statue of Liberty into a symbol of everything that foreigners hate and fear the most: fat ladies. "Madre di dios" cried the sinister illegal foreigns, "I will return to my own country, where the starvation and the cholera keep our women supermodel-thin!" Later, Americans riot in outrage when they find out that there really isn't any such thing as "lard chips."

But wait! Not quite the end! May I make what perhaps will be a final plea from this site in the matter of the 2008 Best Weblog Awards? You already know who you're voting for in Best Humor Blog (me, your Comics Curmudgeon, duh) and Best Liberal Blog (those plucky gals over at the Confluence), but, in the spirit of this column, I ask you to turn your attention for a moment to the Best Comic Strip category. First and second place are already spoken for, but the race for third is tight, and right now the strip in the lead is Day by Day, a cartoon which consists mostly of a black dude and various sexy ladies in their underwear spouting wry, detached Republican talking points. Why not vote for Medium Large instead? Only it dares take on racially charged scenarios like Spider-Man joining the Nation of Islam, plus its creator is gettin' it on with this famous Sarah Palin imitator. Go forth and vote!

[Also, everybody, remember to nominate ALL your favorite WARBLOGS such as Comics Curmudgeon, and of course your Wonkette, at the REAL Bloggies, here. -- Ed.]