2011 everything must go! iraq pt good-bye to all that year end thumb sucka 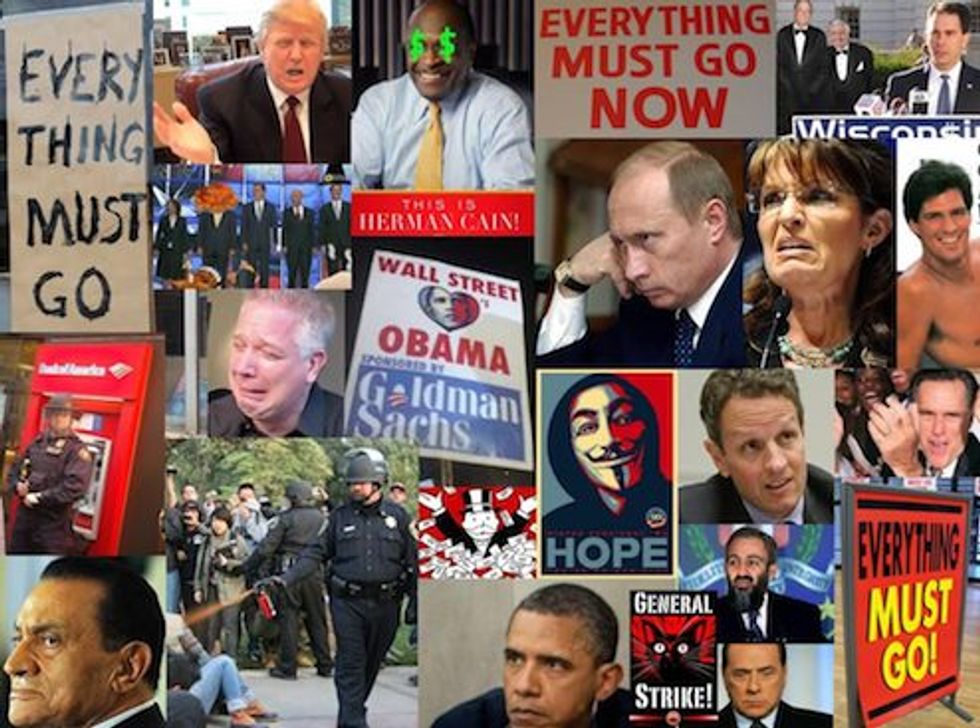 Our latest War Against Iraq is over, did you hear? TheNYT home page helpfully put the years of the war in the headline, like you might for an obituary of Amy Winehouse or Dick Cheney: 2003-2011. That's a long war, even compared to wars we supposedly won, like World War II. (Not quite as long as the War Against Afghanistan, though ... that phustercluck has already dragged on longer than any U.S. war, including the American Revolution.) And what makes this nine-year-long Iraq War "over," anyway? Because Obama said it was over? Uhh, okay we guess! That sure was a great Ticker Tape parade in Times Square, and now we're just doing vodka shots and eating oysters with some hot USO gal we met at Penn Station, or whatever people are supposed to do when wars are won. Anyway, it's time to say good-bye to ALL OF THE THINGS nobody likes anymore, because 2011 was the year when the citizens of Earth finally got up, took a good look around, and said, "Wow. This crap has got to stop.."

The Forgotten War We Lost: How crazy does a year have to get to make us forget the Iraq War? As crazy as 2011, apparently. Back in 2004, people were so bummed out and pissed off over the Iraq nightmare that popular terror dolt George W. Bush very nearly lost the White House for a second time ... to John Kerry! (Gah, Kerry and Edwards.) Iraq continued to be "a thing people thought about, in America" for several more years. It even played a rhetorical role in the 2008 election of old what's his name, Obama. But today, about the only Americans crying about the Iraq War are the families of the 4,484 U.S. troops killed and 32,200 maimed and uncountable veterans driven to insanity and addiction and homelessness by the pointless bloodbath. The defense contractors are crying, too, but the U.S. Government cares a lot about defense contractors, and that's why Afghanistan has been "ramped up" along with all those other countries with Muslims, and the actual United States is also an official war theater complete with hundred-million-dollar robot death drones in the skies over our foreclosed homes and half-vacant malls.

The Age of Rage: Where did the disgust begin, this year? And what made it go from harmless simmer to raging boil? There are many candidates for "the S.O.B. who pushed us over the edge," but none is easier to hate than Scott Walker, the wingnut boytoy of Koch Industries. Because this year of protest and occupation began early in 2011, in February, at the Wisconsin state capital in Madison. By the time the labor protests were forced out of the capital, more than 100,000 people had taken part in the anti-Walker anti-Koch actions. It was here that the full power of YouTube video reports, Facebook updates and phoned-in pizza orders for the protesters became evident -- and it was here, certainly, that the Powers That Be got to work on their plans to shut off social networking, text messages and the entire Internet. By the time the Everything Must Go/Year of Rage reached the poor neighborhoods of London and subway stations where San Francisco Bay people were protesting cops killing citizens in cold blood, turning off texting and mobile service was just a matter of a phone call from The Boss to the Telecoms.

What else? Stay tuned, or "Look on the Internet, later." From unwanted Arab dictators to unwanted U.S. presidential candidates ("all of them, Katie"), 2011 was the year when we all said, "Eh, fuck it."