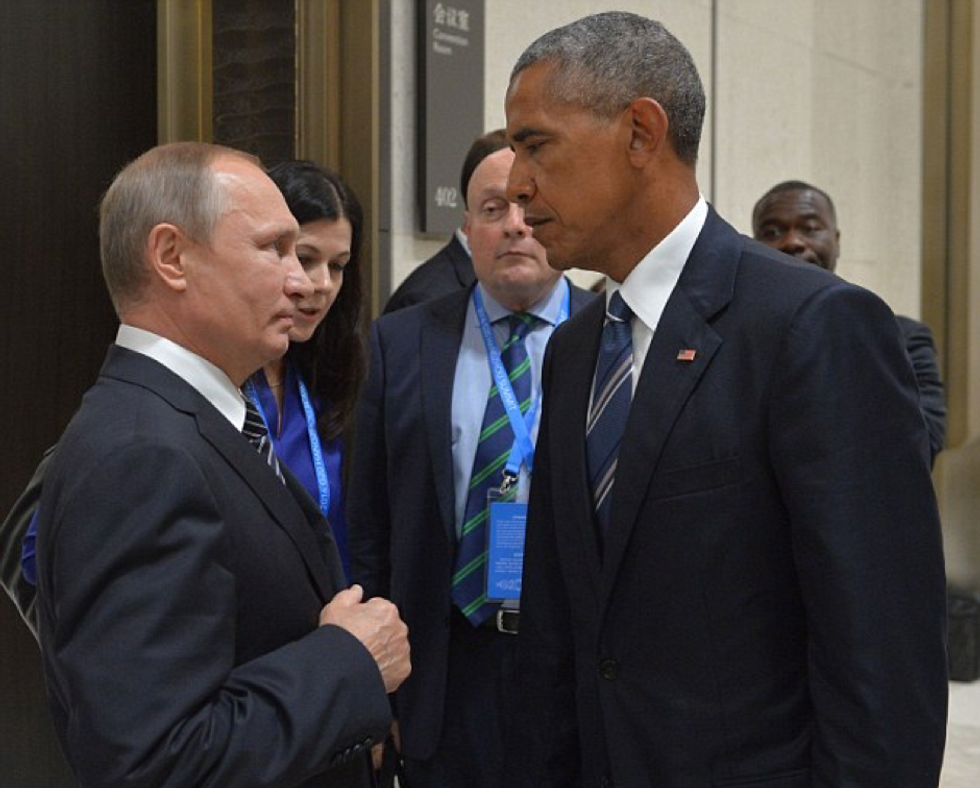 They tried to stop it. Sort of.

The Washington Post has published a HOLY WOW investigation into the Obama administration's efforts (and lack of efforts) to stop the Russian hacking disaster of the 2016 election that led to the election of Donald Trump, and if there was ever a time where we'd say "OH JUST GO READ IT," this is one of those times. Basically, the story is that President Obama tried to do things to stop the attack, and some people wanted to do more things, but they were all obsessed with not looking like they were being "political" about the election that they didn't act (enough) until it was too late. Also, everybody really really really thought Hillary Clinton was so far ahead she would win anyway, so they weren't that worried they might end up handing responsibility for punishing Russia to a guy who may or may not be a foreign intelligence asset of Russia.

One of the most newsy things in the report is about the day in August when the CIA sent a super top secret "eyes only" message to the White House that said "Whoa if true, but we literally have intelligence that says not only is Russia doing this, but Vladimir Putin is leading the operation, and it's made to hurt Hillary Clinton and hopefully get Trump elected." OK fine, the CIA probably didn't say "WHOA IF TRUE," but otherwise that's the gist:

This was when the issue officially landed on Obama's desk. If you'll remember, it was not long after the conventions, when we were just starting to get a sense of the Russian DNC hacks and whatnot. Yet it took until January for the entire intelligence community and Obama to release a report saying, "Yeah this is what happened and Putin did it and fuck all these guys."

Part of it was that at the time, only the CIA was sure where the hacking was coming from. What's funny is that, for the CIA, according to the WaPo, "It was a case that took almost no time to solve, traced to the Kremlin through cyber-forensics and intelligence on Putin's involvement."

What happened after that will make you fucking crazy. The Obama administration wanted as much help as it could get, from all branches of government, to punish Russia, to stop the hacking and to make sure our elections would be safe and secure. Unfortunately, it all fell apart. Intelligence agencies dragged their feet on blaming Russia, and weren't all on the same page until September. They released their report (which Obama didn't sign, and which didn't name Putin, for "intelligence reasons") on October 7 at 3:30 PM, which the WaPo says was actually timed for maximum media play. Unfortunately at around 4:00 PM, the Access Hollywood "Grab Them By The Pussy" tape came out. Then at 4:30 PM or so, WikiLeaks started dropping hot sexxxy emails from the private files of one John Podesta, chair of Hillary Clinton's campaign. It's almost like WikiLeaks was working for somebody! (SAYS WHO?)

Meanwhile, Obama and pals wanted to make sure state election systems were secure, and Homeland Security tried to help (just as Obama Homeland Security chief Jeh Johnson testified this week), but a lot of them told DHS to fuck off. For instance, Georgia!

Brian Kemp, the Republican secretary of state of Georgia, used the call to denounce Johnson’s proposal as an assault on state rights. “I think it was a politically calculated move by the previous administration,” Kemp said in a recent interview, adding that he remains unconvinced that Russia waged a campaign to disrupt the 2016 race. “I don’t necessarily believe that,” he said.

The other prong of the Obama approach was to try to get Congress's attention, in a bipartisan way. Unfortunately, Republicans like Mitch McConnell were like "My goodness, I'm just a common turtle, therefore I'm just not sure Russia did this!" In fact, when McConnell finally said something about it, he merely encouraged states to make sure their voting systems were A-OK, but assured them that it was OK for them to tell the Obama administration to fuck off. Democrats like Dianne Feinstein and Adam Schiff (and Harry Reid!) were out there writing letters and making statements that said "ACHTUNG! IT IS RUSSIA, THIS IS WHAT IS HAPPENING!" But that was just silly Democrat squabbling, probably, and it was much more fun for the media to read Hillary Clinton's emails.

And before the election, that was about it! According to the WaPo, in addition to the hacking, Russia experts noticed all the pro-Trump/anti-Hillary Russian propaganda on Facebook, and the FBI and State were freaked by "an unusual spike in requests from Russia for temporary visas for officials with technical skills," but not much was done about those things. (They did deny those visas.)

Obama’s approach often seemed reducible to a single imperative: Don’t make things worse. As brazen as the Russian attacks on the election seemed, Obama and his top advisers feared that things could get far worse.

You see, at that point, everybody thought Hillary Clinton was so far ahead that it wouldn't ultimately matter what Russia did. As Jeh Johnson noted in his testimony, there was this one candidate out there bitching and moaning about how the election was going to be "rigged," and they didn't want to do anything more that could be viewed as de-legitimizing Hillary's impending victory. (Which never came.) Reportedly they also knew how much Putin hated Hillary, and they were worried that if they overtly got involved in the fight, Putin might do more than he already was doing.

Oh, they issued some warnings to Russian officials. Obama yelled at Putin, CIA director John Brennan yelled at his Russian counterpart, and NSA director Susan Rice pulled Russian ambassador Sergey Kislyak into her office and gave him detention and a note to get signed by his daddy Vladimir Putin. And the WaPo says Obama people believe their warnings "prompted Moscow to abandon any plans of further aggression, such as sabotage of U.S. voting systems." Golly we hope that worked, especially now that we're hearing more and more about just how far into the American election infrastructure Russia actually got.

But then Trump actually won:

“The White House was mortified and shocked,” said a former administration official. “From national security people there was a sense of immediate introspection, of, ‘Wow, did we mishandle this.’ ”

The WaPo notes that at this point, Russia really hasn't been punished worth dick for this. Oh, Bamz imposed some new sanctions (that were kinda worthless, and that the Trump administration has worked from day one to remove), and he kicked out Russian diplomats and closed those Russian espionage compounds in Maryland (only to have President Trump give them right back!).

However, there is one cyber-bomb Obama left for the Russians, that wasn't ready for prime-time when Trump was inaugurated:

Obama ... approved a previously undisclosed covert measure that authorized planting cyber weapons in Russia’s infrastructure, the digital equivalent of bombs that could be detonated if the United States found itself in an escalating exchange with Moscow.

Oh, how interesting! Apparently, since Obama got the ball rolling on that, Trump would have to step in and personally stop it, so let's hope it's happening so far into the Deep State that Trump's intelligence handlers are keeping it from him. Otherwise, he'll just kill the program as a sexxxy love gift to his true boyfriend Vladimir Putin.

As we said at the beginning, this report is extensive and crazy and it even includes one of the most thorough timelines of the Russian attack available on the entire World Wide Internets. So you should go READ THE WHOLE THING, as they say on blogs.

Wonkette has no ads, which means YOU ARE OUR FUNDERS. If you love us, click below, to fund us!