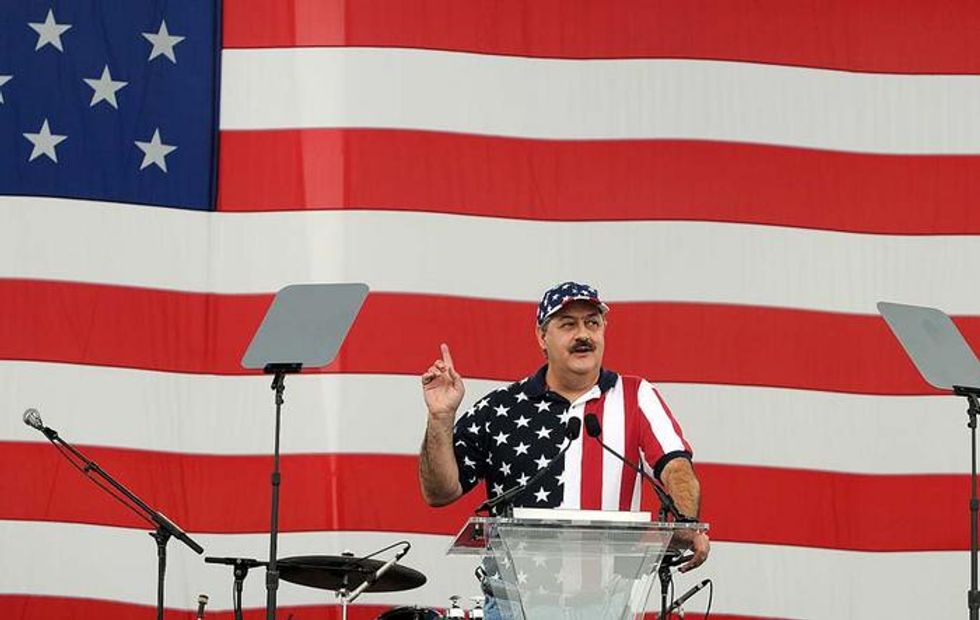 This post brought to you by the Patty Dumpling Endowed Chair for Coal Mine Explosions, Oil Spills, and Pyrrhic Victories

One of America's slimiest corporate executives, Don Blankenship, the former CEO of Massey Energy, was convicted Thursday of conspiring to violate federal mine safety regulations at Massey's Upper Big Branch Mine in West Virginia. An explosion at the mine in 2010 killed 29 miners, and the conviction makes Blankenship, who has done the most to live up to the stereotype of a 19th century robber baron without the flamboyant charm, the "most prominent American coal executive ever convicted of a crime related to mining deaths," according to the New York Times.

Yes, of course there's a "but." The conspiracy charge, a misdemeanor, was the least serious of the counts against Blankenship, who was found not guilty on two felony charges (securities fraud and lying to federal investigators) that could have put him away for up to 30 years. The conspiracy conviction has a maximum penalty of one year in prison, and Blankenship's attorneys immediately announced plans to appeal even that token conviction once he's sentenced in 2016.

[H]is leadership had laid the groundwork for a catastrophe. There was not necessarily a formal conspiracy, prosecutors acknowledged, but they said that Mr. Blankenship’s example and tone had set Massey on a course that put profits ahead of lives.

Prosecutors portrayed Blankenship as a very hands-on manager who regularly pushed production and profits over safety, resulting in "thousands of safety citations" at Massey while treating safety as a secondary concern.

Blankenship's attorneys argued that prosecutors had stretched the laws in attempting to paint Blankenship as a criminal who was indifferent to worker safety merely because his company routinely violated safety regulations, and suggested that Blankenship was prosecuted for political reasons. Not that Blankenship was above taking political action in the area of justice himself; he notoriously spent millions to elect state supreme court members who would be friendly to the coal industry, and especially to Massey. That's what counts as responsive government in coal country.

The jurors reached the decision to convict on the lightest charge after 10 days of deliberation in which they twice sent notes to the judge that they were deadlocked, but rather than declare a mistrial, Judge Irene C. Berger urged them to continue until they reached a verdict. Disappointing though the outcome is, it's at least a conviction, which in coal-dominated West Virginia is nearly miraculous. The New Yorker's Evan Osnos reports:

It was justice, of a kind. Judy Jones Peterson, whose brother died in the mine, told reporters, “Even if Don Blankenship wasn’t convicted of all of these crimes, he is guilty, my friends.”

Osnos also points out that the paper trail revealed in the trial exposes "a toothless regulatory system and a corporate culture that exposes the men and women of Appalachia to extraordinary risk." For instance:

In one memo, from the summer of 2009, Bill Ross, a former Massey employee who was tasked with improving safety, documented a system on the edge of a tragedy. A foreman explained to Ross, “We are told to run, run, run until we get caught; when we get caught, then we will fix it.” When Blankenship was told of that memo, he did not take actions to heed its conclusions; he ordered it to stay “privileged and confidential,” saying, presciently, that, in the event of a trial, it would be “a terrible document to have in discovery.”

[contextly_sidebar id="F9CLrd4eSdFNZO0bAzD2B64EJZVajGXW"]Among other revelations, we also learned that Massey took extreme efforts to avoid safety monitoring for black-lung disease, of which Blankenship said, in a phone call he recorded for his own use, "Black lung is not an issue in this industry that is worth the effort they put into it." Jurors also heard evidence about fun games that Massey would play to avoid the onerous hand of unfair government regulation, since black lung is no biggie and what the government doesn't know won't hurt anyone. At least, not anyone important:

miners were told to wear dust pumps inside their coveralls, in order to skew the results, or to hang monitors in the fresh-air tunnel, far away from the dust that workers inhaled. An investigation later found that at least seventeen of the twenty-nine miners who died in the explosion had suffered from black lung.

Witnesses at the trial also described how mine workers were informally trained to avoid the rules. If a mine inspector turned up unannounced, a security guard alerted a dispatcher, who tipped off the miners ... In his testimony, Chris Blanchard, a former president of the Massey subsidiary Performance Coal, which operated the Upper Big Branch Mine, provided a pithy summary of the collapse of West Virginia’s regulatory might: “It was cheaper to pay the fines than the cost of preventing violations.”

So yes, Massey was a nice place to work, and coal is clean and safe energy for a prosperous America, is what we're getting at. There's also the weird ugly fact that conspiracy to avoid safety rules is a misdemeanor, while the charge of lying to investors, which Blankenship escaped, carried the far heavier penalty. Even so, a conviction is a conviction, and after he's served his year in a minimum security facility -- maybe he can go for walks on the beach with fellow political prisoner Dinesh D'Souza! -- Blankenship will surely know that you can't get away with letting people die for the sake of profits and go unpunished. Here's hoping he gets a really lumpy mattress.