Evil Gov. Rick Scott Would Rather Shut Down Government Than Give Healthcare To Florida Poors 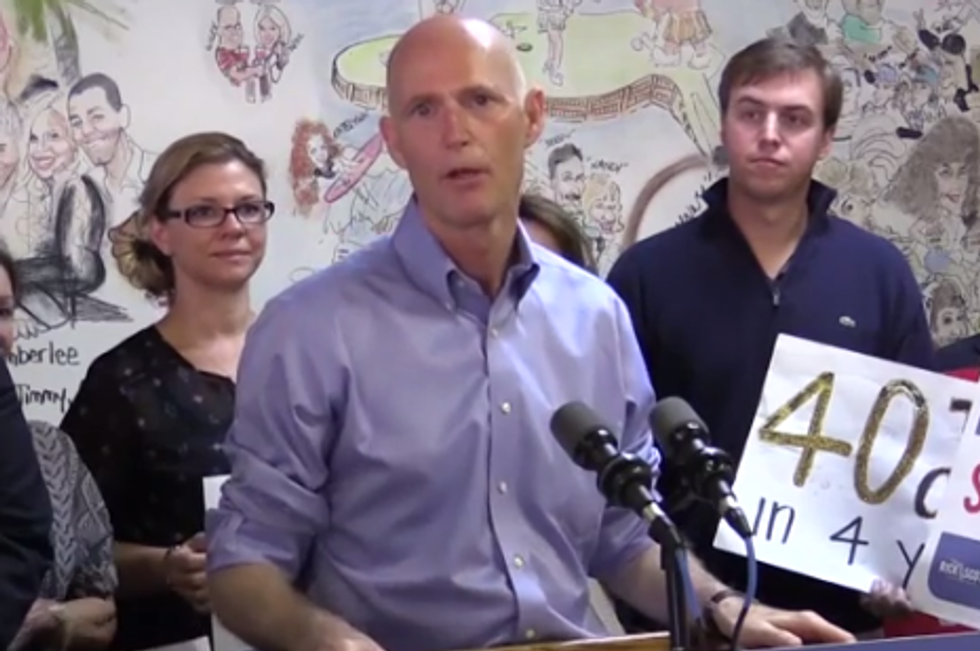 Florida is having quite a dumb fight right now, simply because gross reptile Gov. Rick Scott refuses to take federal money to pay for low-income people's healthcare if it's got Obamacare all over it. So let's shut down the government!

Gov. Rick Scott told agency heads to prepare for the worst Thursday, asking them to list only the state's most critical needs in the event the Legislature can't reach an agreement on a budget that doesn't expand health care to the poor. [...]

"Prepare a list of critical state services our citizens cannot lose in the event Florida is forced to shut down on July 1st," Scott wrote.

In writing the letter, Scott is further digging in his heels in his refusal to expand health care coverage to 800,000 Floridians, a move that could cost the state more than $1 billion in federal money to help hospitals treat the poor, which is called the low-income pool.

In the event that they are FORCED to shut down! So, who is forcing them to do that? Rick Scott is forcing them to do that because, as we all know by now, he is an asshole. Because you see, the Florida Senate was okay with expanding Medicaid, because as yr Wonk has explained before, the Senate is full of corporate whores, but they're okay with being practical on occasion. The House, on the other hand, is full of morons, Jesus freaks and other sorts of characters who pick the corn out of their own poop, and they can't handle the idea of expanding Medicaid, because that's part of evil socialist Obamacare, therefore it's different from taking federal money in other non-Obama ways.

It's not that Scott isn't cool with taking other kinds of sweet federal cash, either. You see, up to now, Florida has had a thing called the Low Income Pool (LIP), which exists to help pay for healthcare for poors, and that is totally fine. Scott would like to keep that thing, which is less effective and more expensive than the Medicaid expansion under Obamacare, because on top of being an asshole, he is holy fuck dumb. Oh, and LIP expires in June, which is why we're having this current conversation about shutting down the government.

Scott says we should definitely have a conversation about how to give healthcare to the poors -- as long as it's not Obamacare -- but that it's just TOO FUCKING HARD to do that in a special legislative session:

"I believe the debate on how to increase access to healthcare while lowering cost and improving quality is an important one to have. However, it will need to be much longer and more thoughtful than we have time to accommodate during a budget special session," he wrote.

Scott told agency heads that he is preparing a budget proposal that "excludes controversial and divisive issues like Medicaid expansion or using Florida tax dollars to fund the federal Low Income Pool program."

"Controversial and divisive issues" are clearly above Rick Scott's pay grade, and the same goes for his mouthbreather friends in the Florida House. It used to be that Republicans would pay lip service to their more idiot constituents, but eventually bend over for their corporate overlords, who, in this case, are happy to say "Jesus, let's just expand Medicaid and MOVE ON." But that was the old days, and being Gov. Rick Scott is NO FUN unless you get to do exciting things like shut down the government and fuck poor people right in the ass, just to prove how much you hate President Obama.