‘Ex-Gay’ Group Cancels Party Because Nobody Wants To Come 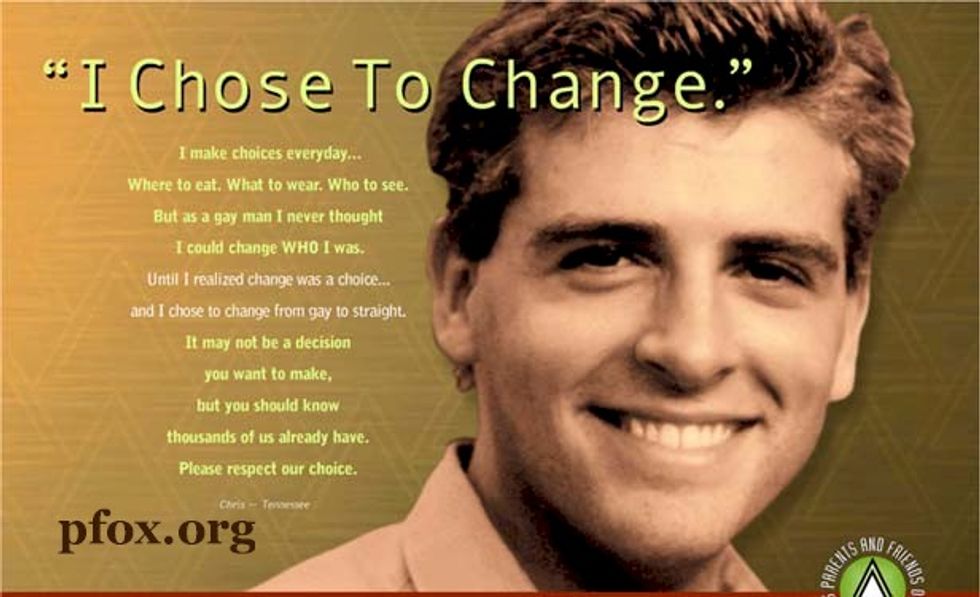 There is a party in the pants of "Exodus International," and nobody wants to come! And that is why the group hascanceled its upcoming "Love Won Out" convention, in which ex-gay ladies show off their human male husbands, and ex-gay men show off Michele Bachmann. Why can't the gays just keep with the program? Let us ask the president of Exodus International, Alan Chambers!

“The majority of people that I have met, and I would say the majority meaning 99.9 percent of them, have not experienced a change in their orientation or have gotten to a place where they could say that they could never be tempted or are not tempted in some way or experience some level of same-sex attraction,” Chambers said at a conference sponsored by the Gay Christian Network in Orlando.

For example, Gary Cooper (no relation to the actor) and Michael Bussee, who were heavily involved in the group’s early years, fell in love with each other and subsequently left. John Evans, a co-founder of Love In Action (the first incarnation of Exodus), left when his best friend tragically killed himself because conversion therapy didn’t work. John Paulk, the founder of Love Won Out (formerly affiliated with Focus on the Family until Exodus acquired the ministry in 2009), became the poster boy for the ex-gay movement, until he was spotted in a gay bar in Washington, D.C., in 2000, two years after he published a book in which he discussed his “successful” journey out of homosexuality.

Well, that does sound very bad, almost as if you can't cure gay, or pray it away, or beat the nelly out of your kids or whatever. This news is hot on the heels of the state of California trying to regulate ex-gay conversion therapy by banning you from getting it for your underage kid when just cold punching him doesn't work. Sad face, religious freedom, etc! Why do the state of California and Exodus International make the baby Jesus cry? [SPLC]