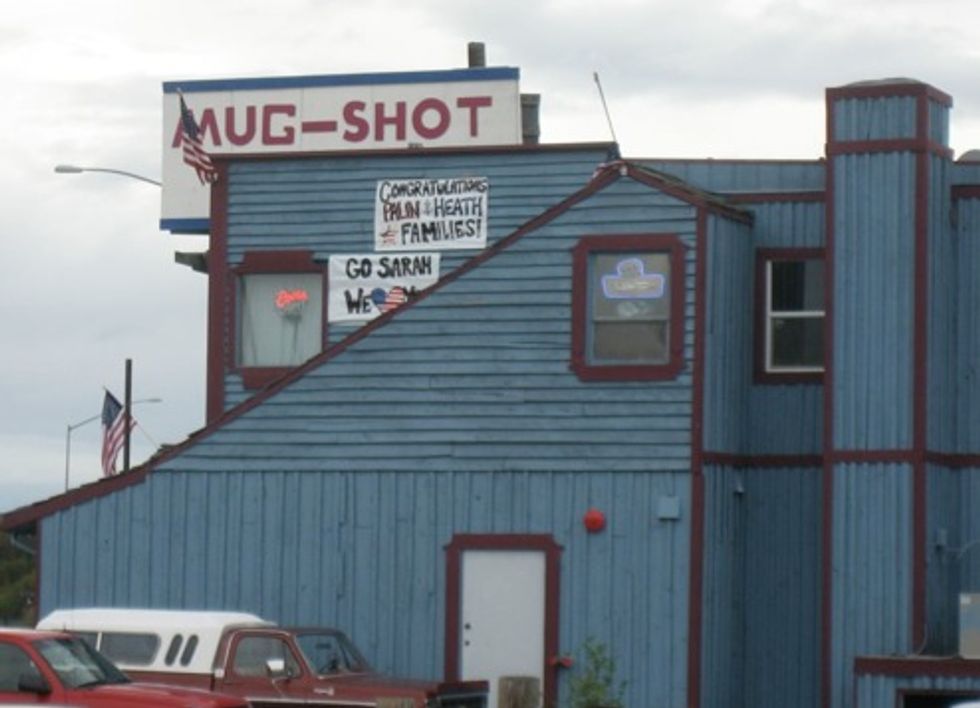 There's a big VP debate watch party tomorrow night in Washington, D.C., at the James Hoban's bar in Dupont Circle, and its guest of honor will be a gal named "Elizabeth." Elizabeth, for those of you not IN-THE-KNOW, is the most famous celebrity in the world now, as she is "the only Wasilla resident living in Washington, DC." Can you even imagine how rich she must be now? And yet, Elizabeth was kind enough to let your associate editor Gchat her in the middle of the day for an informal interview. Among other topics, we discuss Wasilla's famed retail outlets, meth, moose guts, what Bristol Palin's REALLY LIKE, and Palin's years as Wasilla mayor. Does Elizabeth like her hometown VP candidate? Well, here's a hint: this party tomorrow night is doubling as an Obama fundraiser. Interview below!

me: What's the deal here. You're not really from Wasilla are you?

me: Born and raised?

Elizabeth: i was not born there, but moved there when i was 9.

me: Why would you move there?

Elizabeth: and lived there until i was 18 and could get the fuck out.

um, because my parents did and i did not know, at 9, that emancipation was an option.

me: It is! Abraham Lincoln made it so. Too late now though.

So you hated it!?

Elizabeth: ummmm, i wouldn't say i hated every minute of living there.

i mean, it's home, so it has a certain nostalgia for me.

me: What do you get nostalgic about most? The four Taco Bell/KFCs or the Check$ Ca$hed outlets?

the normal things you would think about from your home town.

me: Wasilla high, of course!

it's gone now, to make room for the Target.

me: Did you know that the guy who broke into Sarah Palin's e-mail got in there by knowing that Sarah Palin went to Wasilla high?

Elizabeth: haha, really? i did not know that.

me: I'm getting the distinct impression that you are a filthy liberal.

Elizabeth: can't get anything past you! :)

did the fact that i am doing this for an Obama fundraiser tip you off?

me: no, your RAGING SEXISM against Sarah Palin did.

Is this where the kids hang out?

it got torn down so they could build the Target.

me: Did Sarah Palin authorize that?

Elizabeth: haha, i don't know, i wish i could say she did.

me: So you are describing a "strip mall."

Elizabeth: well, it was a little more than that.

not much, but it did have that common inside area.

where the kids could hang out.

Elizabeth: and a high school band could play on occasion.

oh yeah, and do meth.

me: What percentage of Wasilla is on meth, right now?

Elizabeth: my real name is elizabeth!

me: Have you ever killed a moose and ripped its guts out, for food?

Elizabeth: no...but i have watched my dad do it.

Elizabeth: my family was very traditional.

me: Is it fucking gross?

Elizabeth: the girls didn't do the hunting.

me: Describe what a dead shot moose looks like when it is being "cleaned."

Elizabeth: i don't know! like a dead animal with it's guts hanging out.

me: Have you seen the Empire Strikes Back?

me: I just imagine it looks like that weird sticky rice crap that comes out of the space wallaby that Luke kills for warmth.

i was pretty young, honestly, so i think it's in the repressed memory bank.

Did you know her?

Elizabeth: no i did not.

my sisters went to school with her kids.

my youngest sister is a year older than bristol.

me: Oh! Which kids? Track, Bristol, Willow, Dino or Ewok?

Elizabeth: so they knew of one another.

no, not all alaskans name their kids by looking out the window.

me: Is your youngest sister pregnant too?

Elizabeth: no, my youngest sister has the good fortune to have a raging liberal of an older sister to tell her about birth control.

me: does your sister know Levi, the redneck father?

Elizabeth: i don't think so, i mean, she went to high school with them so she knows of him, but they aren't friends.

me: Yeah, he seems like an ass. I guess if they had been friends, your sister would've gotten pregnant automatically, birth control or not, because he is a horndog. Anyway.

me: Was Sarah Palin a good mayor of Wasilla or did you not care because it's not an important job?

Elizabeth: i did not care at the time because it was when i was 14-18 years old.

me: Those are important developmental years.

Elizabeth: but i can definitely say now that i don't care because it's not an important job

me: So here in the mid-atlantic, we judge mayors on two things: (1) does the mayor do crack? and (2) when snow comes, are the streets plowed efficiently and swiftly?

What is the mayor of Wasilla judged by?

How many new Sonic Hamburger restaurants she can bring in?

Elizabeth: it's actually the size of the Wal-mart that really matters to Wasillans.

me: And now the Target!

Elizabeth: Wasilla has the biggest Wal-mart you have ever seen in your life.

me: Did you work at the Wal-Mart?

it was actually opened after i had moved away.

me: So AFTER SARAH PALIN WAS MAYOR?

Elizabeth: yep, so there you go right there.

me: What a shitty ass mayor.

me: So you moved to DC straight from Wasilla. Is DC really ANY better?

Elizabeth: i actually moved to Vermont from Wasilla, so it was a more gradual transition.

DC is different only in the ratio of white trash to every other ethnicity.

me: Are you really the only Wasillan in Washington?

Elizabeth: ummm, my friends and i think so.

i'm actually not sure though.

i personally don't know anyone else from Wasilla that lives here.

it's a dubious distinction if it's true....

me: Had you ever met a black or a gay before moving from Wasilla?

Elizabeth: i had met a couple black people.

i had met people who i think must have been gay, but were not out.

me: No they were just on meth.

Elizabeth: going even to vermont from wasilla though, was quite a culture shock.

me: That's so scary. I've been to Vermont many times. There isn't much there!

but there is more there than there is in Alaska.

Based on your experiences, do you think Sarah Palin will have an easy transition to any actual human city when she and McCain win?

Elizabeth: no, i think she will be petrified.

me: wait till she sees dupont!

Elizabeth: because you can't see Russia from here.

yeah, it's not going to be a pretty scene.

although, the next time a moose gets hit in the circle (which, let's face it), you would know who to call to take care of it.

The "We Can't Believe Elizabeth is from Wasilla" vice presidential debate watch party with Elizabeth will run from 6:30 to 11 p.m. tomorrow night at James Hoban's, 1 Dupont Circle NW. These scummy liberals will make you pay $25 for Barack Obama in order to gain entry, if you're into that sort of thing.