Facebook So Sorry For Fucking Up EVERYTHING. Wonkagenda for Fri., Sept. 22, 2017 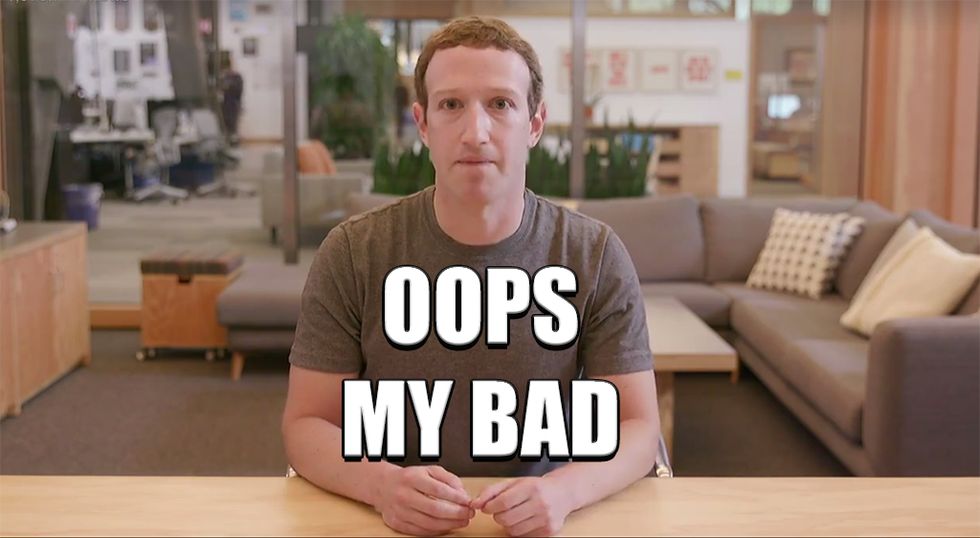 Morning Wonketariat! Before we get started, we need to thank Lisa, a St. Louis wonker who's helped out @KillerMartinis and me by letting us stay in her lovely home/gallery/art space while we cover the continuing protests in St. Louis. Now here's some of the things we may be talking about today!

Since zombie TrumpCare won't die, here's a breakdown of how bad states will get fucked under Cassidy-Graham/TrumpCare.

Republicans are stepping on the gas for tax reform in a last ditch effort to send a $1.5 trillion tax cut for the wealthy to crash land on the backs of the icky poors.

In a new op-ed, Wilbur Ross mansplains NAFTA. You can read it, or you can join us in saying, "Oh, go fuck yourself, Wilbur Ross!"

Trump's people gathered in a smoke filled room to bitch about re-reshaping US climate policy in their neverending effort to try and wipe away B. Barry Bamz's mark on the planet.

There's word coming from the Hill that HUD's Community Block Grant Program will be gutted so that the poors will have a much harder time getting their hurricane relief AND Meals on Wheels. Suck it, poors!

According to Jeff Sessions, there are "wolves in sheep's clothing" crossing the border and posing as innocent DACA recipients -- just waiting to huff, and puff, and blow your glass houses down.

Betsy DeVos admits that she too scoots around 'Murica on her own private jet, but she also pays for it. Come on, can we please be a little more discriminating with the point?

Head hunters in Washington and beyond are seeing a deluge of resumes from staffers who are looking to bail out of the Trump train.

A new study has found that all the shitty lead-tainted water in Flint, Michigan, has caused a huge rise in fetal deaths.

Goons belonging to Turkish President Recep Tayyip Erdogan got in ANOTHER fight after protesters stormed a speech he was giving in New York. Good thing Trump just complimented him on their close, deep personal friendship.

If you hated Obama's Not American drone policy, you're going to love Trump's now that the US is actively considering MOAR drone strikes and GI-Joe commando raids.

As Germany braces for its election Sunday, it's holding fast for an onslaught of Russian propaganda fake news.

Mark Zuckerberg is super sorry that he took all those Ameros to spy on you and let Russia mind-fuck your drunk uncle into voting for Donald Trump.

LOLOL Sally Yates might be Tiffany Trump's law professor at the DC school for smart kids and douche nozzles who want to be lawyers.

Fox News ALLEGEDLY has a standard of journalistic ethics and (SHOCKINGLY) even Fox's evil corporate overlords don't see Fox and Friends as a legit news source.

The Daily Stormer is having a hell of a time keeping its basement dwelling neckbeards up to date with all their Nazi crap, and its founder is currently hiding amongst all the other white people in Iceland (for now).

It's readers like you who keep us alive and kicking many asses, do your part today!