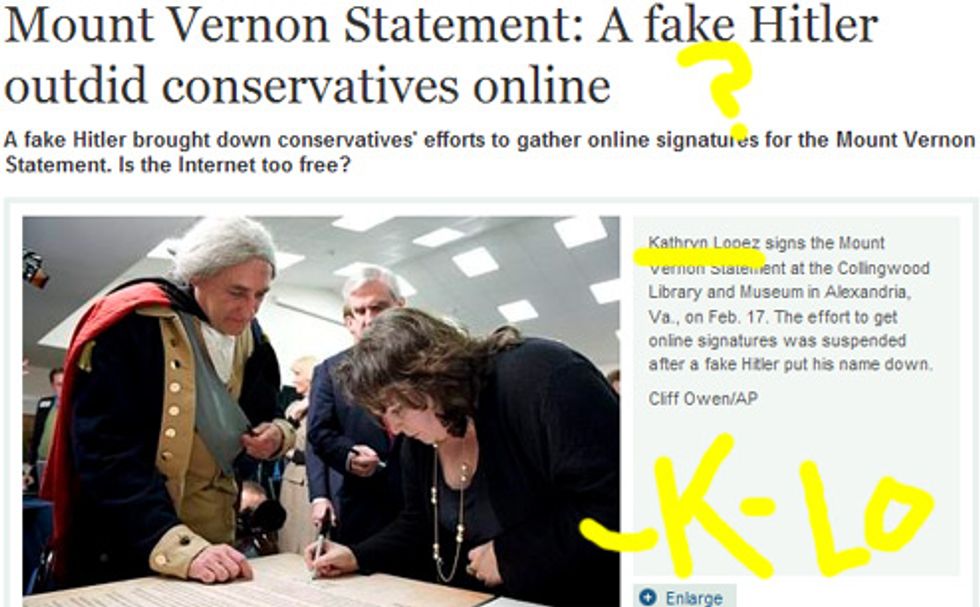 You guys, come on! The teabaggers just wanted to dress up like George Washington and have a "virtual slave state constitutional convention" and you meanies went and ruined it all, just because the teabaggers are a bunch of delusional idiots who somehow think a wide-open website won't be, uh, desecrated if they wish real hard or something. Plus, here's a rare picture of K-Lo outside of her apartment, where she's usually weeping in her Snuggie to old Reagan speeches.

Anyway, why does this Christian Science Monitor article have "The New Economy" as a subhed? What does that even mean? And how does this important webzine know that the Hitler in question is "fake," anyway? Did they see his birth certificate?

But when the group invited Americans to sign the document online – complete with cursive signatures and a graphic quill – participatory democracy broke down in the face of the no-rules Internet.

For a time, it appeared that the statement's first signer was Adolph Hitler, or at least someone referencing the German dictator while misspelling his first name. "Joe Dufus" got in his digital John Hancock and so did another would-be prankster .... Organizers promptly pulled the plug on the virtual signing feature.

Oh yeah, if you've got clip-art of a fucking quill, then you're totally protected from any kind of internet tomfoolery. Idiots.

Anyway, Wonkette operatives of the world, thanks for ruining these assholes' website and dreams! [CSM]