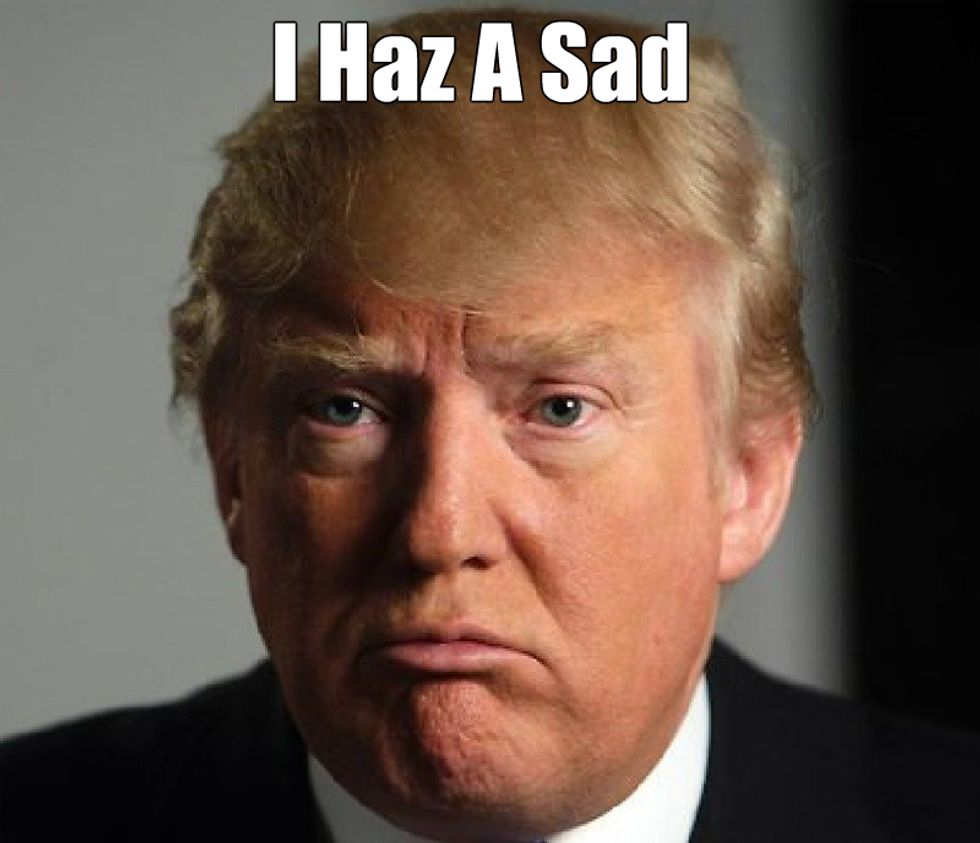 After all he's done for CNN, they repay him like this?

Now that he's got a whole 100 days under his belt, as well as several inches of necktie, Donald Trump is ready to kick off his reelection campaign, so his campaign committee wanted to run an ad boasting about all his accomplishments. Unfortunately, CNN declined to run the ad since it referred to the mainstream news media as "Fake News." This made the Trump campaign -- which is campaigning for 2020 after a whopping 100 days, did we mention? -- very unhappy indeed, so executive director Michael Glassner blasted out an email complaining in Trump supporters' native language, all-caps semi-English: "FAKE NEWS STATION REFUSES TO RUN AD HIGHLIGHTING THE PRESIDENT'S FIRST 100 DAYS[.]"

Glassner complained that the president of the United States had been silenced and left unable to get his message out by the monsters at CNN, who don't respect the First Amendment right to have every media outlet carry your message if you want them to:

It is absolutely shameful to see the media blocking the positive message that President Trump is trying to share with the country [...] It's clear that CNN is trying to silence our voice and censor our free speech because it doesn't fit their narrative.

The unfair Fake Newsers at CNN replied with a Tweetor message saying the ad didn't comply with their dumb standards, simply because it contained an untruth:

Obviously, only a fake news outlet would claim it objects to fake ads, which is pretty rich coming from a company that runs Subaru ads with dogs driving cars!!! Hiding behind the First Amendment to control your own content, guys? Next you'll be moderating the comments you don't allow!

This was, of course, excellent news for the Trump campaign, which could now whine that CNN was fake news that won't even run ads it considers fake:

“By rejecting our ad, CNN has proven that it supports censorship, is biased, and fears an opposing point of view,” Glassner said. “President Trump’s loyal supporters know the truth: The mainstream media mislead, misguide, deceive, and distract. CNN epitomizes the meaning of fake news and has proven it by rejecting our paid campaign ad.”

[wonkbar][/wonkbar]Real news does whatever the administration wants it to, after all, which is why all reporting the president doesn't like is fake. That's not really fair -- CNN is often really DUMB news, but it's almost never completely fake, at least not since they stopped wondering whether a black hole eated the airliner. Now all Trump needs to do is feel slighted a little more, whine about fake news, and avidly watch CNN some more to see if they talk about Donald Trump enough.

Yr Wonkette is supported by reader donations, so we're not running any Trump ads either! Please click the "Donate' linky below and send us moneys if we float your boat.