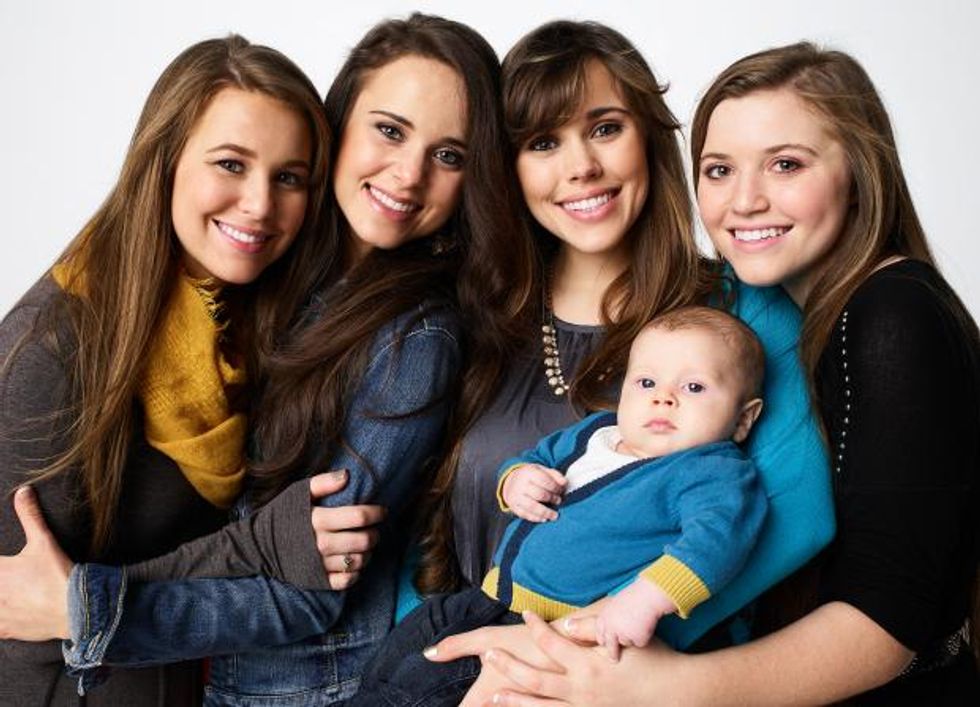 squashy baby spurgeon is the real breakout star of the show.

Every week, we wake up early on Wednesday morning and say a little prayer to whatever bloodthirsty pagan god we're praying to this time that somehow, some way, the "Jill and Jessa: Counting On A Trainwreck" show did not air the previous evening. Consider our prayers unanswered yet again.

We open with the most boring storyline of the year thus far: the fucking treehouse that isn't really a treehouse. We get another montage of the building process, a montage which is nothing but footage from the previous episodes. This show is so low rent.

The treehouse that is not really a treehouse has a fucking vaulted ceiling and double-hung windows.

There is just no way the doughy Duggar boys and the younger children built this treehouse. Maybe for this season the Duggars were paid in building materials and labor from some TLC set workers?

Even the younger children have been suckered into calling it a treehouse even though it is in no way connected to a tree. It's just a playhouse. An enormous playhouse that is probably larger than your actual living space if you live in a city.

Some quantity of the Duggar girls are packing for a big exciting trip to Branson. Of course it is Branson. Jinger helpfully runs down that she, Anna, Jana, Jessa, Joy, Meredith (who is maybe one of creepy molester Josh Duggar's spawn, we think?) and squashy baby Spurgeon will be going on this trip.

Anna comes up with the very exciting idea that all the ladies should bring high-heeled shoes and try to wear them! These people need to get out more.

Joy does not like heels. Joy does not like dresses. Joy wants to wear "her own style." You know that Joy longs to throw on some jeans and a t-shirt but haha she will never get to. The other Duggar ladies comfort her by explaining that when she gets married, she can wear a skirt set with a satin top, and then she can always wear the satin top on her anniversary. Those Duggars, always thinking ahead.

Jessa and Ben display some obligatory affection for the cameras and declare they love and miss each other before Jessa and the squashy baby leave for girl time. Still more excitement planned for Branson: they might make s'mores! Let's not get too crazy, Duggar girls.

The ladies see an unpenned cow and decide to stop and put it back in its pen. Cue footage of them all running around to try to recapture this cow. The thing hops back into its pen of its own volition, but they roundly congratulate themselves nonetheless.

Of course they're staying in some faux-rustic cabin. There are not enough rooms, apparently because the Duggars can never really be entirely apart, so there's some complicated discussion as to where everyone will sleep.

Now it's time to FaceTime Jill! Hooray! We get an update on squashy baby Israel, who took his first steps. Congratulations, squashy baby! Everyone coos and oohs and aahs over him and Christ it is boring. We are watching a teevee show where the people on the teevee show are watching FaceTime. It's like an "Inception" from hell.

Jill regales the other ladies with tales of how there are dangerous tarantulas in their house in their undisclosed Central American location. Everyone is appropriately terrified, and then we finally get to stop watching them watching FaceTime.

Side note: thus far we haven't cut back to any other Duggars since the brief treehouse-not-a-treehouse reveal. What the hell else are all the other Duggars doing right now?

All the ladies basically tell Jana and Jinger that they might be getting married right quick. Anna is very excited about this prospect: "You could always be six months away from an engagement if you're single and over 18." The camera helpfully cuts to Jana and reminds us she is 26, and then back to Jinger, and the teevee tells us she is 22. GET TO MARRYING, LADIES. You're already like one million years too old in Duggar years.

The girls are going to have a spa day, but a spa day for the Duggars apparently does not involve going to an actual spa, nor does it involve bringing in any of the usual suspects who help you feel all special and spa-y. No, in this instance, the sisters are doin' it for themselves. They'll take turns manicuring and massaging each other and for some reason this all just feels icky.

Maybe it's just us, but we've never really wanted our siblings to rub our feet.

OH MY GOD WE ARE FINALLY FINALLY GOING TO TALK ABOUT JOSH! Jessa feeds Anna a softball question so that she can make mouth noises about how her creepy molester husband going through sex rehab has been a hard road but a good road and she knows there's a lot more work to do and there's a long road ahead but they trust God and blah blah blah. Honestly, Anna looks pretty rough about it, as she should. She's not obliged to be Josh's fucking cheerleader or pretend this is easy on her.

We cut from this weak sauce discussion of Molester Josh to the Duggar girls demanding Joy describe what she wants in a guy. She's vague as fuck about it. Joy is our pick for the Duggar Girl Most Likely To Be a Secret Lesbian.

Everyone now pivots to bothering Jana about her dream man, who she hopes will be tall, dark, and handsome. Fuck, these people have no imagination, do they? Jessa lectures Jinger on how dudes should be. They should be kind and nice to people. Whoa, if true.

Back to Joy! We're getting husband talk whiplash here. Joy wants a man who gets his hands dirty. Meanwhile, Jessa continues to lovingly rub everyone's feet and we haven't gotten any less squicked out about it in the interim, to be honest. Jinger wants a city man. Oh shut up, Jinger. You don't have a hope in hell of living in a metropolitan area unless you are assigned to god-bother people that live in the inner city. Otherwise, you'll be stuck in the rural South forever.

Now all the girls are going to ... climb a tower? This is the most boring vacation ever. It's called Inspiration Tower and they don't even have to climb it because there's an elevator. Lazy. Jinger is desperately afraid of heights. We see a montage of her being younger, in the halcyon days of "19 Kids and Counting," gritting her teeth, grimacing, and gripping the hands of various siblings when she's forced to be high off the ground.

Thanks to Jinger's fear, we now get a rundown of other Duggar lady fears. Snakes, heights, roaches, flying, roller coasters. Even their phobias are generic and boring.

One more night of spa trip! The ladies are all getting fancy-dressed, but Anna notes that their fanciness is wasted because there are no dudes to witness the fancy. Well, there's squashy baby Spurgeon, we guess.

We get a look back at Duggar Girls Through The Ages to remind us that their style used to be more prairie.

The ladies are at what they think is a fancy restaurant, but it really just looks country. One of them asks what scallopini is. One thinks it is scalloped potatoes. Another thinks it is made with scallops. One thinks it is onions. Another thinks it is squid. Jesus Christ you people. Finally a waiter shows up to explain that it is meat (in this case, veal) pounded thin. They all look nonplussed. Joy orders her steak without a demi-glace, because she doesn't know what a demi-glace is, until the waiter explains a demi-glace, at which point she wants the demi-glace HARD. Can you imagine the bland food cave these women have lived in all their lives?

Oh God marriage talk again. Anna notes that next time they have girl time, there will probably be two more marriages and some more babies.

The food arrives and they all whisper wonderingly at their plates, wondering what the food is. Squashy baby Spurgeon sits and drools.

Jinger is happy that once she saw the food on her plate, she actually recognized it. Honestly, all each of them ordered was some meat with sides, and maybe one of them got some ravioli? It's not like they got baby octopus in chili sauce or something.

Jessa explains that Ben wants 15 sons. On any other show, this would be silly hyperbole, but you know full well that Ben actually does want 15 goddamn male offspring and Jessa isn't going to go out of town with her sisters for the next 30 years because she's going to be pumping out children.

Everyone talks wistfully about how they probably will not have another Ladies Going Boring Places trip before another one of the Duggar lady spawn get married.

They exit the restaurant, singing their own praises for having made it through the whole night in heels and that they didn't end up in the ER. Cut to their feet:

Honey, those are just wedge sandals. Everyone can walk in those. Some of us may not want to, because we like high heels or kicky little flats or wingtips, but it is not a stupendous feat of balance to walk on giant wedges.

Next time: Everybody is going to Central America to see Jill and Derrick! Perhaps we'll learn more about the terrifying danger area in which the Dillards reside! God, perhaps the whole family could get mauled by a...mountain lion? Do they have those in Central America? Something like that, maybe. It would at least spice things up. Throw us a bone, show.