FBI Archives Releasing Files On Trumps Not Renting To Blacks. Some Timing, Huh? 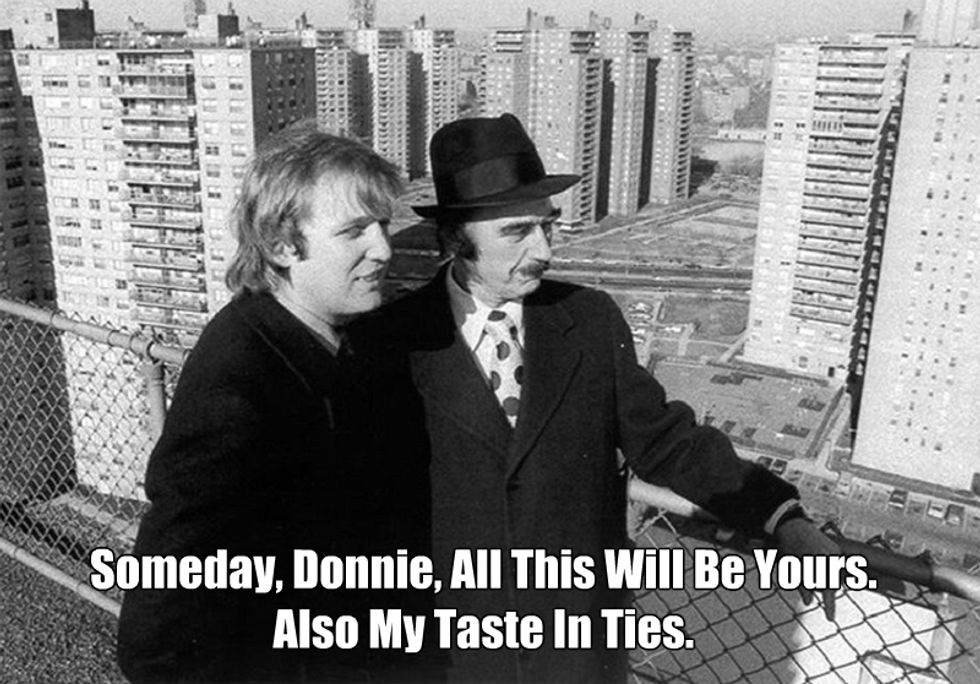 Just don't let some black guy make fun of you at a dinner. That happens, you go nuclear, OK?

The ways of the FBI FOIA archive are mysterious indeed -- the site regularly posts to the interwebs old documents that have been requested in Freedom of Information Act cases, but as you may recall from the kerfuffle over the Bureau's release of documents calling Fred Trump a philanthropist and detailing the FBI's investigation of Bill Clinton's pardon of Marc Rich -- a week before the election -- sometimes the timing seems a little too perfect. Remember those WTF Tweets?

We'd feel a lot better about this if Mulder and Scully were on the case.

At the time, the FBI promised to investigate the FBI Records Vault Twitter account and make sure everything was on the up-and-up, and they released a statement explaining how the system was supposed to work:

The FBI’s Records Management Division receives thousands of FOIA requests annually which are processed on a first in, first out (FIFO) basis. By law, FOIA materials that have been requested three or more times are posted electronically to the FBI’s public reading room shortly after they are processed. Per the standard procedure for FOIA, these materials became available for release and were posted automatically and electronically to the FBI’s public reading room in accordance with the law and established procedures.

So it was pure coincidence that some FOIA requests happened to result in the FBI Archive posting documents that might be of interest during the election. Besides, they also posted Nikola Tesla’s FBI file at the same time, so clearly that wasn't politically motivated, right?

Or who knows -- maybe the FBI Archive Computer is an early version of an Ironic Timing AI. Because wouldn't you know it, as Donald Trump's relationship with the Intelligence Community has gotten a lot less friendly in recent days, the FBI Archive happened to post a whole trove of documentation from the Justice Department's investigation of racial discrimination complaints against the Trump Management Company in the early 1970s. There are nearly 400 pages, many of them barely legible (if at all), but some of them are fine examples of how Fred Trump (oh right, and also his son!) tried to skirt equal housing laws, which after all are only burdensome government regulations designed to keep entrepreneurs from making a profit.

Consider this excerpt from an interview with a doorman at a Trump building in 1974:

A supervisor "told me that if a black person came to 2650 Ocean Parkway and inquired about an apartment for rent, and he, that is [redacted] was not there at the time, that I should tell him that the rent was twice as much as it really was, in order that he could not afford the apartment," the ex-doorman said.

As we've discussed before, Donald Trump made a point in the campaign debates of reminding everyone that when the Justice Department's Civil Rights Division sued the Trump Management Company for discrimination in 1973 (and again in 1982, for failing to follow the consent decree that closed out the 1973 case), the company eventually reached a settlement that allowed them to close the case while admitting no wrongdoing, so what's the big deal? The big deal is found in the accounts of testers from the National Urban league, which sent prospective black renters to inquire about apartments advertised as available, only to be told there were no vacancies. Then a white applicant would go to the same place, be shown an apartment, and put down a deposit, as we see in this excerpt from a 1968 New York City Commission on Human Rights case:

And then there was the statement from a former employee who said that Fred Trump warned him “it was absolutely against the law to discriminate” -- but nonetheless later made it clear to the employee “he also wanted to get rid of the blacks that were in the building.”

Not everything in the dossier is quite so entertaining -- some of it is so poorly copied you can't even read it, and there are a lot of pages of standard lease forms and similarly thrilling background documentation -- but it's worth a look, and worth bookmarking for the next time somebody on Fox wonders why black people don't give Donald Trump the benefit of the doubt.

You sort of have to wonder what that FBI records computer is going to spit up next. Oh, and Donald, remember, the Records Vault webpage is required to post this stuff by law -- you can't shut it down.