FBI Director James Comey Said A Stupid About Hillary's Emails, Burn Him For A Witch! 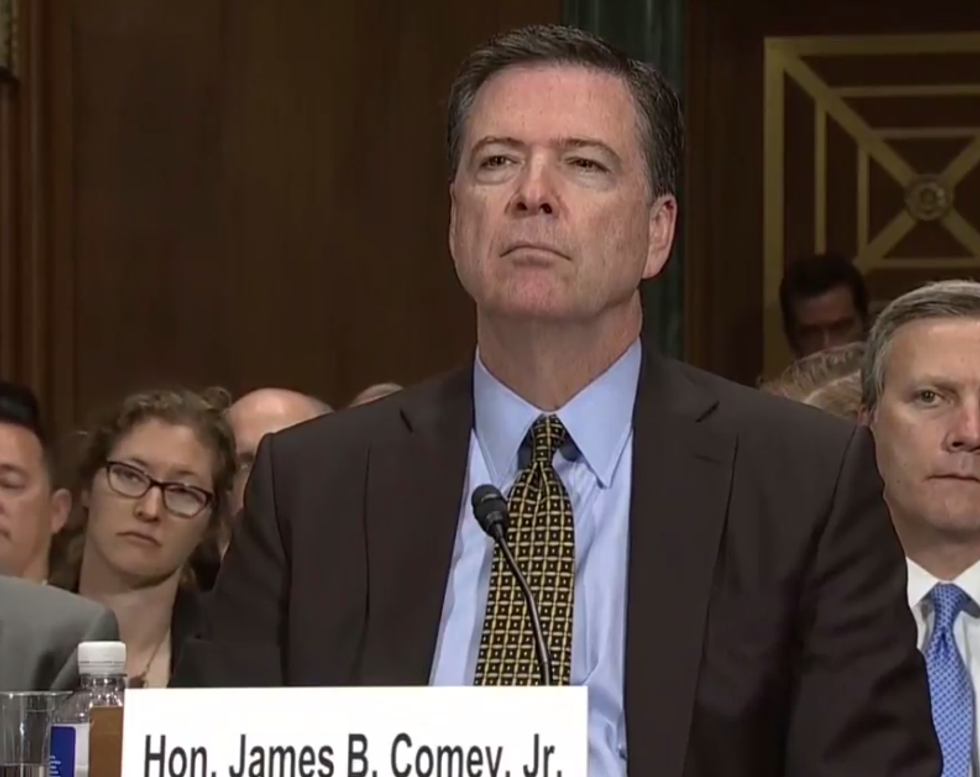 Maybe not the devil.

The internet is currently having a mad because FBI Director James Comey made some wrong claims about Hillary Clinton BFF Huma Abedin's evil email practices during last week's hearing in the Senate Judiciary Committee. Because it was the committee's annual oversight hearing on the FBI, all the stuff about Comey's handling of the Hillary Clinton email investigation came up again and again, which was to be expected, both because Democrats relished another chance to yell at Comey for throwing his dick in the middle of the presidential race 11 DAYS BEFORE THE ELECTION, and because Republicans will never pass up an opportunity to bitch and moan about Hillary Clinton.

Comey protested SO HARD during the hearing that he saw no better option besides telling Congress, 11 DAYS BEFORE THE ELECTION, that the FBI was reviewing some new exciting Hillary emails, that may or may not be Hillary emails, and that may or may not be relevant. And in his explanations to the Judiciary Committee, he made the following boo-boo, as reported by ProPublica:

Perhaps Comey’s most surprising revelation was that Huma Abedin — [Anthony] Weiner’s wife and a top Clinton deputy — had made “a regular practice” of forwarding “hundreds and thousands” of Clinton messages to her husband, “some of which contain classified information.” [...]

The problem: Much of what Comey said about this was inaccurate. Now the FBI is trying to figure out what to do about it.

Oopsie! We actually heard Comey say the "hundreds of thousands" thing, and we just assumed his wires got crossed, because we knew from reporting at the time that it was just a handful of problematic emails that somehow ended up on Anthony Weiner's Sexting Machine. ProPublica's sources confirm that Comey fucked up in his testimony, and now the Washington Post is confirming ProPublica's reporting, noting that "Justice Department and FBI officials are now considering whether and how to clarify the misstatements."

Cool story, right? And now the internet is yelling about JAMES COMEY LIED AND HILLARY DIED and stuff, and we understand the temptation, because oh boy, James Comey has pissed us the fuck off over the past year, and there's a part of us that wishes we had never laid eyes on his 6-foot-8-inch gigantic man body. But we're just not sure this story of Comey saying a wrong thing during last week's hearing was as OMG YOOOGE as some people seem to think.

For the record, we were FURIOUS about Comey's first letter to Congress. We were VERY ANGRY at Comey when he meekly sent a second letter, TWO DAYS BEFORE THE ELECTION, that was like "DOY MY BAD YOU GUYS, FALSE ALARM!" We were SPITTING NAILS GRRR ARGH on November 9, when it became clear that America had just barely "elected" an incompetent puss-grabber as its new president, by a margin of negative three million votes. THANKS JAMES COMEY, GO FUCK YOURSELF JAMES COMEY, is what we were saying.

Was there really no good option for Comey in those days before the election? Could he not have handled this "new information" in a quieter (classified) way, especially since he wasn't sharing with the American public that Donald Trump and his comrades had been under FBI investigation for months at that point, regarding their possible collusion with an enemy power (Russia) to steal the election? FOR REAL, COMEY, FOR REAL?

We would like to suggest that, much to our chagrin, Comey actually might not have had any other option, and in doing so, we will share our current Running Theory Of James Comey, which goes like this:

We hope we're right. We hope the rumors are true and grand juries right now at this very moment are reviewing Trump Russia evidence, and that, slowly but surely, we're getting closer to the day where we can watch gleefully as all these fuckers GO TO JAIL.

And if we're not right, we'll just update this with a new Running Theory of James Comey, because gah, we don't fucking know, stop asking us.