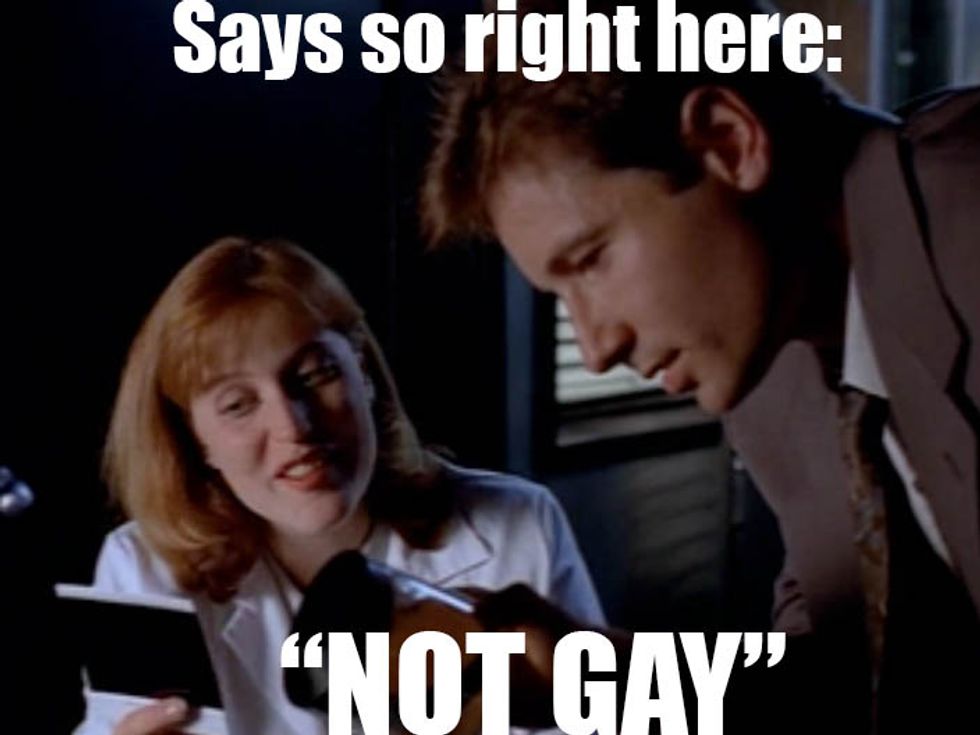 So this is weird, and now we are more confused than we were before:

FBI investigators so far have not turned up persuasive evidence that Orlando gunman Omar Mateen was pursuing gay relationships, according to two government officials familiar with the investigation.

The FBI began investigating that possibility after media reports last week quoted men as saying that Omar Mateen had reached out to them on gay dating apps and had frequented the gay nightclub where the June 12 massacre took place. One man even claimed to be Mateen's gay lover in an interview with Univision that aired this week.

But officials say the FBI, which has recovered Mateen's phone and conducted 500 interviews, has not found concrete evidence nearly two weeks into the investigation to corroborate such accounts. They also say the investigation is ongoing and that nothing has been formally ruled out.

Um ... huh! Far be it from us to question the FBI, as we at Wonkette make it a policy to only engage in wild speculation when we explicitly tell you we are engaging in wild speculation. However, this is not an official FBI statement, but rather an anonymous something-or-other from "two government officials familiar with the investigation." So in that spirit, we have a couple questions:

[wonkbar]<a href="http://wonkette.com/602886/are-the-orlando-gay-club-shootings-about-you-or-should-you-stfu-a-wonksplainer"></a>[/wonkbar]In the immediate aftermath of the shooting, many people came forward to say, YUP, they knew who that guy was, that he had frequented Pulse nightclub over the years, and that they had talked to him on Grindr and Jack'd and whatnot. Were they all mistaken?

When we reported on Univision's interview with the dude who said he had an affair with Omar Mateen, we put "ALLEGEDLY" all over the piece, as that dude's account had not been corroborated. But when multiple other people have sort of the same story about the killer, that would seem to suggest that there is something there, right? Is the FBI missing something?

Is the FBI a straight man who does not understand the ways of gayness? Not to be tacky (us? never), but does the FBI need to bring in a Verified Gay to explain that "It's not gay if the balls don't touch" is not actually a good operating philosophy when assessing whether somebody was a giant closet case? We are just kidding the FBI, and also JUST ASKING QUESTIONS.

Maybe the government is just trying to be extry careful with this one, refusing to confirm or deny anything until they are abso-tively posi-lutely sure of the truth. And Attorney General Loretta Lynch has said this week that we may never know the full extent of the murderer's motives.

Is it possible that Mateen's recent radicalization and deep hatred for gays existed on their own, and that reports of him being a huge closet case are all wrong? Surely, that is a possibility! But it still makes us go "HMMMMM."