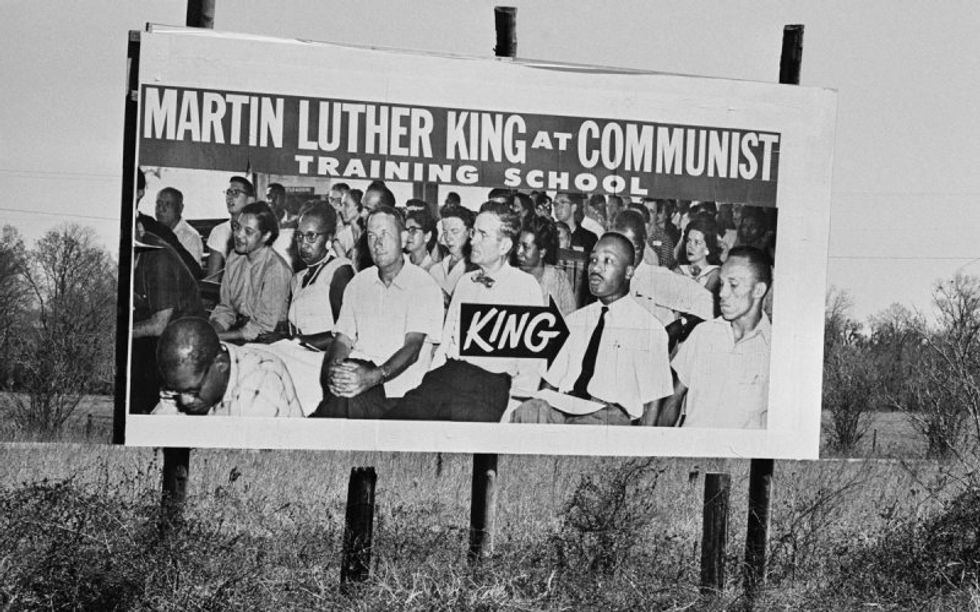 A truly astonishing historical document was released Tuesday: A 1964 letter sent by the FBI to Martin Luther King, attempting to blackmail him with the release of surveillance tapes of his scandalous sexxytimes.

The letter, published in the New York Times by Yale historian Beverly Gage, was sent along with a sample of tapes the FBI had made, and was written by FBI domestic intelligence chief William Sullivan in the guise of a supposedly disgusted black supporter, urging the civil rights leader, "There is only one thing left for you to do. You know what it is." King, not exactly a dummy, immediately suspected the letter had come from the FBI, seeing as how disgruntled black supporters probably didn't have access to sophisticated surveillance equipment. As Gage details, the letter was just one part of a now infamous program of harassment and surveillance that J. Edgar Hoover's FBI pursued against King.

Here's the unredacted letter that Gage obtained from the National Archives; prepare to be disgusted:

The FBI never followed through on the letter's threat that King had only 34 days "before your filthy, abnormal fraudulent self is bared to the nation.” The existence of the surveillance of King -- and other "domestic enemies" of the United States -- was exposed by the Church Committee in 1975. Even though they were never released, the existence of the tapes has provided some delightful fodder for rightwing detractors of King, like former Arizona Gov. Evan Mecham, whose first priority in office in 1987 was to rescind an executive order that had established a King holiday. King, he said, didn't deserve a holiday, and plenty of wingnuts wrote letters to the editor about how MLK was a commie, a racist, and a sex pervert. Excellent work, FBI! King was a dangerous subversive and Bad For America. If only he'd been one of those "Moderate Nazis" the FBI and CIA actively recruited during the Cold War. Fuck you, Martin Luther King, you're no moderate Nazi.

We're a little reassured by this detail in Gage's report: "The current F.B.I. director, James Comey, keeps a copy of the King wiretap request on his desk as a reminder of the bureau’s capacity to do wrong." But only a little reassured, since there's so much cynicism to be had, and so much data fuckery available to be done.

Even so, sometimes it's nice to see a reminder like this that America is -- for all its faults -- probably no longer the nation where people at the top levels of government would pull such purely evil shit. SHUT UP, CONSERVATIVES, THE IRS NOT GIVING YOUR POLITICAL CAMPAIGN GROUP A PHONY TAX EXEMPTION IS NOT THE SAME. Then again, maybe it's best if we didn't discuss it at all, since it might cause young people in Colorado to not love America the way they should.