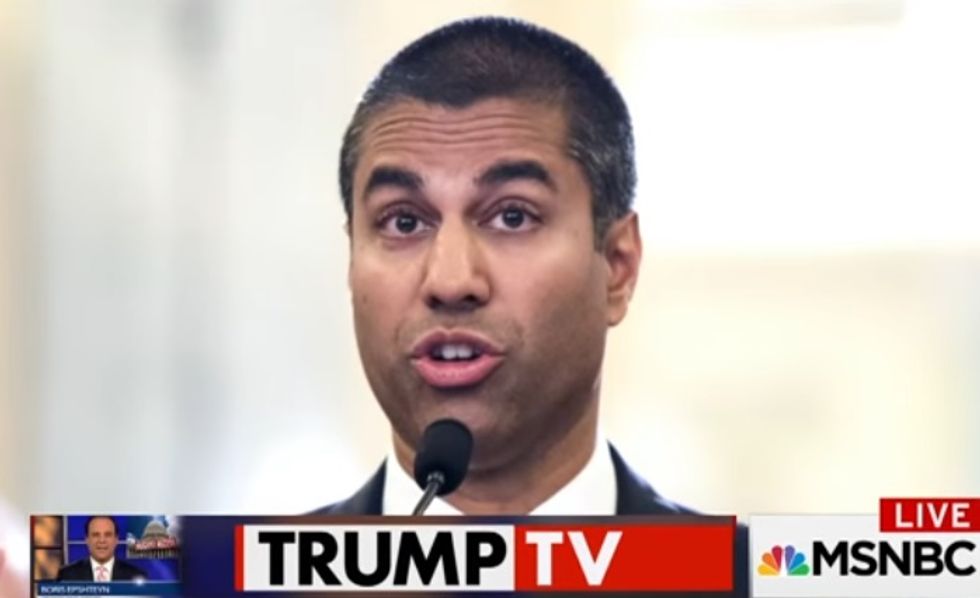 In an exciting example of Unleashing the Free Market, Federal Communications Commission (FCC) chair Ajit Pai exploited one weird regulatory loophole to allow right-leaning Sinclair Broadcasting Group -- already the single biggest owner of local TV stations in the country -- to expand even further by buying 42 stations from Tribune Media, which will mean that, if the deal goes through, Sinclair stations would reach 72 percent of American homes -- or at least the ones that still watch local news. This is a bit of a problem, maybe, since current law -- that's from Congress, not the FCC -- limits any single company from owning stations with a national audience bigger than 39 percent. But maybe an exception is OK for a broadcaster that sends its stations "must-run" pro-Trump editorials and scripted content they're required to present to their local audiences, without any indication that the material isn't locally sourced.

Sinclair is quietly building itself a terrific outlet for pro-Trump propaganda, with video segments by former Trump spokesman Boris Epshteyn (who's loathed even at Fox News) and others, but it couldn't get much bigger since it already reaches 38 percent of homes. But then Pai stepped in with a neat little trick! He revived something called the "UHF discount," which makes no sense in a world of digital TV, but was useful to how the combined audiences of Sinclair and Tribune stations got counted. It's a holdover from the days when channels over 13 were fuzzy and nearly unwatchable, like "Barney." Politico explains:

That quality gap no longer exists in today's world of digital television, but under the policy that Pai revived, the commission does not fully count those stations’ market size when tallying a broadcaster's national reach.

Critics including the FCC's most recent former chairman, Tom Wheeler, say the change amounts to a regulatory sleight-of-hand.

"Congress was explicit in black letter saying 39 percent viewership would be the maximum," said Wheeler, a Democrat who got rid of the discount last year. But instead, he said, “There was funny math created to allow the count to come up to still be below 39 percent, wink wink."

By acquiring 42 stations but pretending some of their audiences are still watching with crappy reception over rabbit ears -- which is not possible given that all broadcasts are now digital -- Sinclair retains broadcast footprint that reaches only "39% of homes." (Allegedly.) Politico made a nice map of what expanding from 38 percent of markets to "39 percent" of markets would look like if the deal is ultimately approved:

“If you look at any of our regulatory actions, they’re not designed to benefit any company or segment of the industry," he said.

And frankly, we take him at his word -- he'd be in favor of any media conglomerate that wanted to bend the rules and make more money. The Trump love is just a happy bonus.

And, oh, what a happy bonus it is! Back in December, The Washington Post noted that Sinclair gave Trump overwhelmingly positive coverage, and coincidentally took a harsh line on Hillary Clinton. In a brilliant segment of "Last Week Tonight" from earlier in the summer, John Oliver highlighted how Sinclair forces local stations to run rightwing segments produced by the company, and even provides news scripts for local anchors to read:

[I]n contrast to Fox News, a conservative outlet where you basically know what you're getting, with Sinclair, they're injecting Fox-worthy content into the mouths of your local news anchors, the two people who you know, and who you trust, and whose on-screen chemistry can usually best be described as "two people."

You should go ahead and watch this whole video, where Oliver brings his trademark Investigative Comedy to the issue of media concentration and why it's Not Good For America. The Sinclair case is especially worrisome, he says, because here's this thing you've never heard of that's suddenly throwing around billions of dollars and threatening to change how "local" media works:

Oliver had a lot of fun with a "must-run" feature, Sinclair's "Terror Desk" reports, which include stories on actual terrorism, but since it's a daily feature, sometimes has to scrape up content on days when there's no terrorist attack, like repeating a dubiously-sourced report of ISIS chain-sawing Iraqi teens in half, or a story about European judges overturning bans on "burqini" swimwear. Muslim swimsuits are "terrorism" now? (Add your own "fat German guy in a speedo is real terrorism" joke here.) Former Trumper Boris Epshteyn got very angry at Oliver's piece, because since when is reporting on ISIS MURDERING PEOPLE IN EUROPE "NONSENSE," HUH?

There are a couple bits of good -- and not fake -- news about Sinclair's "must-run" segments. For one thing, not all stations are happy with them. As Oliver notes, Seattle affiliate KOMO meets its contractual obligation by running the damned things at the lowest-rated part of the day, like 4:30 AM. And while the FCC's public comment period expired Monday, it's entirely possible pressure from consumer groups and lawmakers might still sway the FCC's final decision. Yep, time for another call to your representatives, kids. Then, of course, there are two other great ways to send a message! Let your local Sinclair station know you'll be watching the local news on another station, because at least their moronic happy talk is locally grown. And you can always call a few of their advertisers and complain, because Money Talks.

Yr Wonkette is supported by reader donations, not funny math. Please click the "Donate" linky to do a donation!