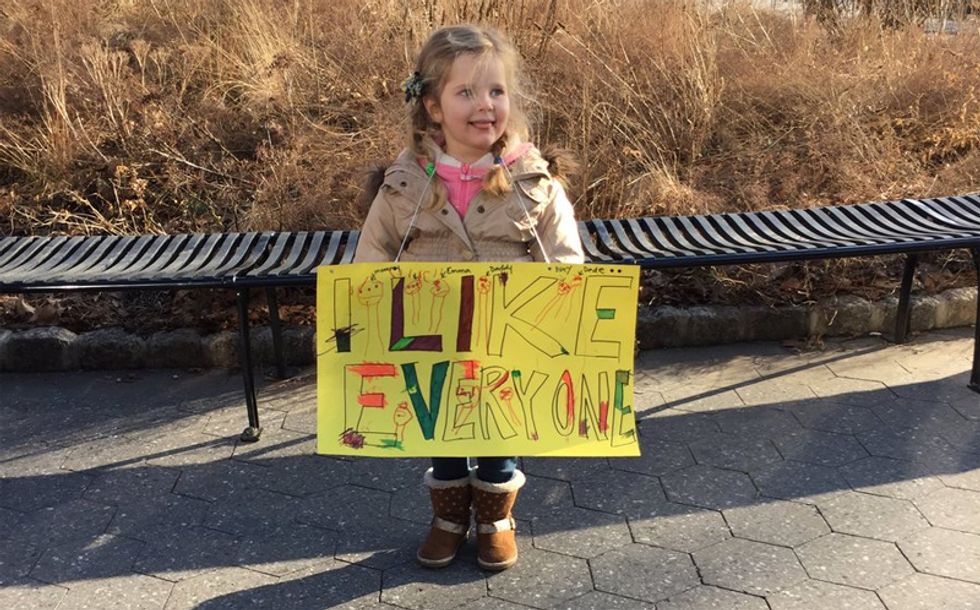 The adorablest protester in Battery Park

Some late-breaking news for Wonkers to savor tonight: A federal judge in Seattle has temporarily blocked Mad President Snapcase's entire executive order on immigration, including the 90-day ban on entry by travelers from seven Muslim-majority countries. The order by U.S. District Judge James Robart applies nationwide, and will put the travel ban on hold until Robart can review the case in full.

The case was brought by Washington state Attorney General Bob Ferguson, then later joined by Minnesota. Robart rejected the Trump administration's argument that since the executive order concerned national security, the states had no standing to challenge it, and granted the temporary restraining order on the grounds that the states were likely to succeed in their claim.

“Judge Robart’s decision, effective immediately ... puts a halt to President Trump’s unconstitutional and unlawful executive order,” Ferguson said. “The law is a powerful thing — it has the ability to hold everybody accountable to it, and that includes the president of the United States.”

Hold On To That Refugee Nice Time, Because Trump Is Telling All Those Judges To F*ck Right Out Of Here

Is violating a federal court order really all that bad if you really think it's necessary?

Now the disappointing news: It may not mean travelers and refugees can start coming to the U.S. again immediately, because of course when the executive order was issued, the State Department revoked between 60,000 and 100,000 visas held by people from the seven countries (a government lawyer in a case being tried in Virginia said the number was 100,000; the State Department later issued a statement saying only 60,000 visas had been revoked). And the Trumpers, not surprisingly, seem disinclined to be helpy:

A Department of Homeland Security official told NBC News that the judge's order will have no immediate practical effect. All previously issued visas from the seven affected countries were canceled by last week's executive order, the official said, meaning people would have to reapply.

That means people trying to get to the U.S., including any number of international students who are missing classes, not to mention those sick kids waiting for treatment in the USA, will have to go to a consulate or embassy Monday to begin the visa application process all over, unless of course the Trump administration is able to get a federal appeals court to stay the restraining order before then.

But as is typical with breaking stories like this, we're also getting mixed information -- maybe travel will resume immediately after all?

According to Reuters, citing an airline official speaking anonymously, Customs and Border Protection has informed US airlines that they can once again board travelers who had been barred by an executive order last week.

In a conference call at around 9 p.m. EST (0200 GMT), the U.S. agency told airlines to operate just as they had before the order, which temporarily had stopped refugees and nationals from seven Muslim-majority countries from entering the United States. Individuals from those states who have proper visas can now board U.S.-bound flights, and airlines are working to update their websites to reflect the change, said the official, who was not authorized to speak publicly.

We have a feeling that "proper visas" is going to run smack into the earlier cancellations by the State Department. So get ready for another weekend of confusion at airports.

Prepare also for a weekend of idiocy from the Trumpers; a couple of hours before the ruling came from Seattle, the Twit In Chief twatted, apropos of nothing:

We must also long for a president who had mastered simple punctuation. Still, we could take that TrumpenTwit optimistically: Maybe he'd be willing to accept exile? Get ready for tomorrow's early-morning tweetstorm in which Trump argues Judge Robart is hopelessly biased and unfair because of whatever ethnicity "Robart" is. This executive order can't be illegal because Trump won in an electoral landslide! Can't go after Judge Robart for being an Obama aappointee -- he was appointed to the federal bench by George W. Bush.

For fans of the revision process, the White House issued a statement saying it intended to ask for a stay of ruling, then shortly afterward issued a second version with the word "outrageous" removed:

We'll keep updating you on this story as it develops.