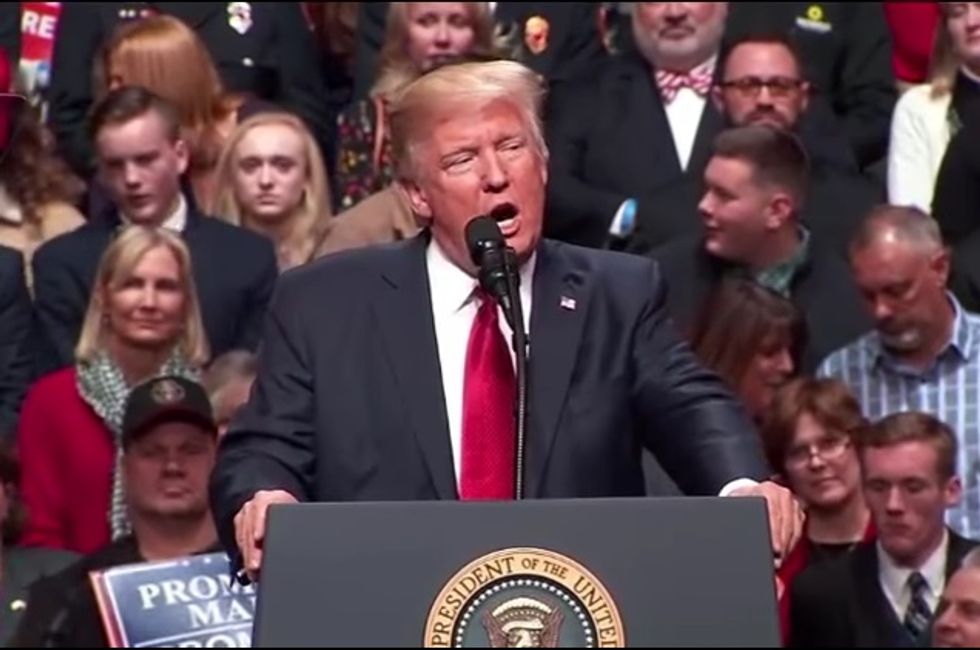 Donald Trump's latest attempt at a ban on travel from six Muslim-majority countries got smacked down by federal courts in Hawaii and Maryland just hours before it was supposed to go into effect, leaving America open to imaginary attack from the scary Muslims in Trump's head. Both rulings found the executive order had violated the First Amendment, because you can't go yelling in public for a year about a Muslim ban and then issue an executive order tailored to be kind of a Muslim ban, even if it doesn't mention Muslims. Judges can be fairly smart people, it turns out.

In the Hawaii ruling, U.S. District Judge Derrick K. Watson said the order was clearly intended to discriminate against Muslims and issued a temporary restraining order against the entire travel and refugee ban, finding the plaintiffs -- the state of Hawaii and a Muslim man whose mother is in the process of applying to travel from Syria -- had a “strong likelihood of success” in proving the executive order was unconstitutional.

Watson declared that “a reasonable, objective observer — enlightened by the specific historical context, contemporaneous public statements, and specific sequence of events leading to its issuance — would conclude that the Executive Order was issued with a purpose to disfavor a particular religion.”

Watson also didn't have much patience for the government's claim that the intent couldn't possibly be to discriminate against Muslims because the travel ban didn't apply to all or even most Muslims worldwide:

“The illogic of the Government’s contentions is palpable,” Watson wrote. “The notion that one can demonstrate animus toward any group of people only by targeting all of them at once is fundamentally flawed.”

We'll be sure to trot that paragraph out when we hear from a Deleted Commenter on how the travel ban is definitely not a Muslim ban.

In a second ruling overnight, U.S. District Judge Theodore D. Chuang in Maryland issued a narrower ruling against the travel ban only, also citing statements by Trump and his advisors that Chuang said made it clear the travel ban was “the realization of the long-envisioned Muslim ban”:

“These statements, which include explicit, direct statements of President Trump’s animus toward Muslims and intention to impose a ban on Muslims entering the United States, present a convincing case that the First Executive Order was issued to accomplish, as nearly as possible, President Trump’s promised Muslim ban,” Chuang wrote.

Donald Trump was not pleased by Watson's order, telling the crowd at another of his campaign-style rallies -- his only source of joy anymore -- the ruling had been "done by a judge for political reasons.” Trump vowed to the Nashville crowd that he'd fight the decision all the way to the Supreme Court, and encouraged a great big round of boos for the next stop in any appeal, the U.S. Court of Appeals for the Ninth Circuit. Trump followers just hate that Ninth Circuit almost as much as they hate Hillary Clinton -- Trump even managed to get a nostalgic round of "Lock her up!" going by mentioning Clinton in the middle of insisting a president can do anything "he or she" wants when it comes to national security. It was a weird moment; perhaps next he'll get crowds chanting to lock up judges who rule against him. And why is Watson's ruling so bad? "This ruling makes us look weak, which by the way we no longer are, believe me," Trump said, because he's accomplished so much in two months.

To emphasize how much he respects the judicial system, Trump suggested that if this "watered down" version was unacceptable to the courts, maybe he'll bring back the first one, and how would they like that, hmm?

Let me tell you something, I think we ought to go back to the first one and go all the way [...] The danger is clear, the law is clear, the need for my executive order is clear.

There's a guy who knows how the system works, all right. He's like really smart.

The temporary orders are not final rulings; the administration can either appeal the restraining orders up the line in the federal courts, or could fight the full case in the Hawaii to get a definite ruling on the executive order's constitutionality. Or both. Or, Trump being Trump, the president may drop the travel ban altogether and launch an effort to break up the Ninth Circuit, which wouldn't win him any court cases but would be emotionally satisfying and would keep him busy.

Yr Wonkette is now ad-free! That means we depend on your generous contributions to keep us in business. Use the convenient donation bar just below this article to donate -- you have no other choice, believe me.