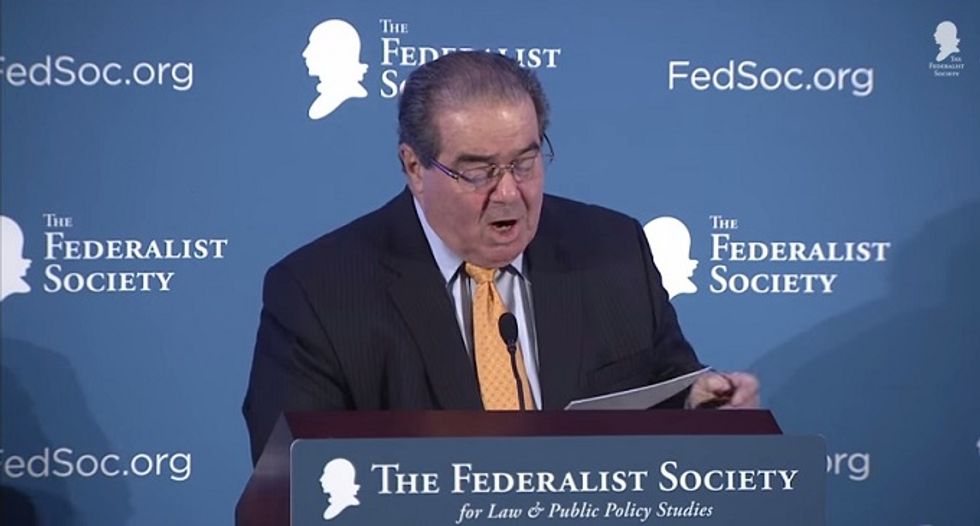 If you were in the nation's capital over the weekend, you might have sensed a certain something in the air. Beyond DC's typical ambient pomposity, there was an extra whiff of self-satisfied libertarianism and an elevated concentration of unironic bowties in the area of Connecticut and L, where the Federalist Society had set up shop for the 2014 National Lawyers Convention [sic: we've sent a search party for the apostrophe that has apparently gone missing from that title].

Unlike many of the conservative confabs we visit as political tourists, the Federalist Society does not have a bustling radio row with talk show hosts conducting interviews or a vendor room filled with right-wing documentary makers and shadow-campaign super PACs giving away tote bags and bottle openers slathered with their chosen messages. "FedSoc" is far too dignified for that! They prefer to stick to impassioned defense of the Constitution against all perceived threats, so we were looking forward to a fire-spitting opening volley from this year's first speaker, Supreme Court Justice Antonin Scalia.

Imagine our dismay when, rather than come out swinging on married gays or fraudulent voters, a bespectacled Scalia spent half an hour at the front of the Mayflower Hotel's Grand Ballroom meticulously tracing the origins and enduring legal influence of Magna Carta. During the course of that, we did learn that Magna Carta purists do not use a definite article before "Magna Carta" (because it's Latin, ignoramus), and Scalia briefly channeled King Edward I, bellowing "HOLDEN FOR NAUGHT" down at the floor as if he were menacing an ACLU lawyer cowering before him.

Other than that, Scalia's history lecture was a giant snooze-fest. Even the alpha federalists in the audience clearly weren't into it. We spotted FedSoc perennial panelist and minimum-wage abolitionist Richard Epstein checking his watch repeatedly from his seat directly in front of Scalia's podium.

For disappointed Supreme Court thrill-seekers, there was still hope in the form of Justice Samuel Alito's promised appearance at the Society's fancy lawyer-dinner across town.

It would be hard to top the previous year's dinner-tainment, Clarence Thomas describing his days selling papers for the Black Panthers while under surveillance by the FBI, but we waited through two hours of 1,400 federalists eating and a lively opening act -- a dramatic reading of the California affirmative consent law by Federalist Society president Eugene B. Meyer -- until at last Justice Alito took the stage.

Almost immediately we sensed trouble. Rather than being interviewed by a fellow judge like Clarence Thomas was, Alito was seated with one of his former clerks, corporate lawyer Adam Ciongoli. The whole "interview" consisted of Ciongoli covering his old boss with sloppy verbal kisses, interrupted only by a spot of weirdness during a discussion of Alito's dissent in a case about "crush" videos. Having prompted Justice Alito to explain to a ballroom of half-drunk federalists that there are people who get sexual pleasure from watching women kill kittens with their high heels, his protege then cracked: "If they're in California, does the kitten have to say yes?"

See, it's funny because a helpless animal can't consent to be squished to death for fap material! Realizing a beat too late that he was the only one laughing, Ciongoli followed it up with a quick "sorry," but still, gross. (Alito declined to allow video of the event, unlike Clarence Thomas, but trust us -- unless you're into hearing jokes about animal torture, you're not missing out on anything.)

The fawning by former subordinates continued into the second day, as the conference's chair, Leonard Leo, welcomed Utah Sen. Orrin Hatch with a story about Leo's time as a lowly committee clerk, when he watched Hatch bravely battle liberal "innuendo and rumor" meant to disparage Saint Reagan's judicial nominees. Leo didn't even mind that Hatch never paid him back for a tuna sandwich he'd fetched for the senator during a hearing 20 years earlier because the senator had done a tuna sandwich's worth of "fighting to secure a judiciary that is true to the Constitution as written" since then.

Hatch loosened up the crowd with some jokes about lawyers and Mormons going to hell before getting to the meat of his speech: the Federalist Society's important fight against "the unbridled activism of the Supreme Court in the 1960s and 70s," President Obama's "unprecedented executive overreach" and "myriad legal abuses," and Hatch's disdain for the term "progressive," since "they're just straight old dumbass liberals anyway."

Orrin Hatch put in a good day's work as the sole emissary from Capitol Hill at the Federalist Society after his fellow Utah Republican Sen. Mike Lee canceled his scheduled appearance at the last minute, a change that Leonard Leo told us was due to some mandatory senator thing that suddenly came up. (We remain a bit skeptical of this explanation, since it involves senators working.)

As FedSoc lumbered into its third and final day, bowties drooping and coffee tapped out, they suddenly remembered the theme they'd chosen for the year: "Millennials, Equity, and the Rule of Law." Just in case the youths weren't won over by the employment panel where members discussed helping young people by making it easier to fire young workers, some professors got together to talk about the hideous gluttony that afflicts institutions of higher education these days.

Sadly, the video of the panel starts after the first speaker, Ohio University professor Richard Vedder, who was trying to warn us about the "seven deadly sins" colleges are committing. Did you know there are schools installing rock-climbing walls and "lazy rivers" for students to "float on and contemplate life"? And why does anyone get tenure anymore for publishing papers on Shakespeare?

Daniel Polsby, the dean of the George Mason Law School, then railed against the campus scourges of "globalism" and "electric blue trash cans" with their tyrannical demands of "WHITE PAPER ONLY!" It's like someone can't even question the intrusion of recycling bins into the learning environment without being branded some kind of crank.

After Saturday's luncheon debate, where George W. Bush's Attorney General Michael Mukasey didn't exactly win over the crowd with his support for NSA hoovering up everyone's phone records, there was one last stab at a "millennial" focus at a panel titled "Is the Future of the American Dream Bright?" for which former Clintonite Lanny Davis was teamed up with Guantanamo detainee lawyer Neal Katyal. They seemed to give America about 60/40 odds of future brightness.

On the other side of the stage, Charles Murray from the American Enterprise Institute said the country's future would be better if small businesses banded together and agreed to ignore any regulation they decided was "idiotic." What was the government going to do, punish them all? That sounded to us like some kind of civil disobedience, and we tweeted so, and a few minutes later during Q&A some patriot got Murray to say that yes, these businesses just needed to Rosa Parks their way out of all these stupid rules, which Murray said were worse than a biblical pestilence.

And before we knew it, the last FedSoc panel was over. We emerged to find that the hotel was doling out Bailey's and hot chocolate from a cart in the lobby and, after a toast to surviving the three days of madness with our new friend, Texas Supreme Court Justice Don Willett, we slipped out into the cold and crossed back to the secular world following our seclusion in the Church of Federalism.

If you ever find yourself confronted with a large group of federalists, remember: they can be quite cordial if they don't see you as actively trampling on their treasured liberties, but there are some among their number who think America is not truly free unless the Mayflower Hotel can pay the nice lady handing out the hot chocolate two cents an hour.

You can follow Beth on Twitter. She is not currently an official member of any group ending in -ist.