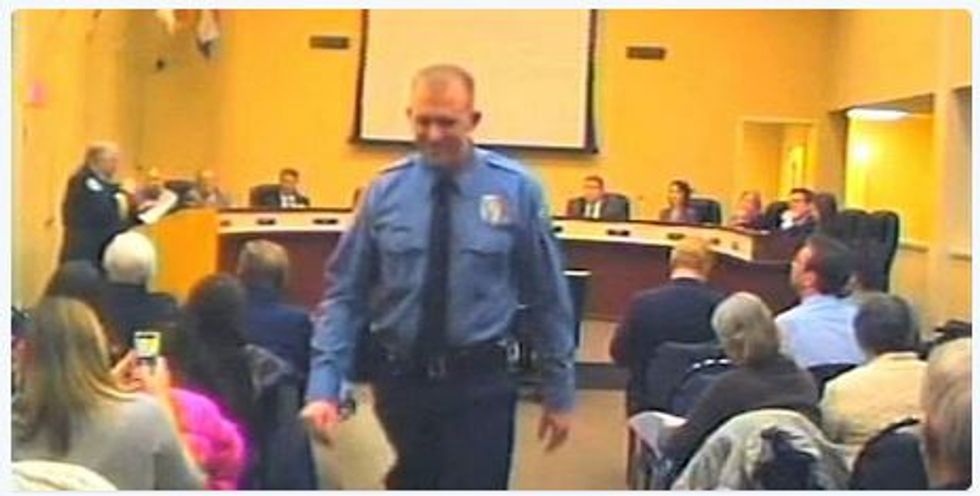 After dropping days of just-kidding hints and sending the media into a third-degree frenzy Monday, the grand jury mulling the fate of Ferguson, Missouri, police officer Darren Wilson finally released its decision. St. Louis County Prosecuting Attorney Robert P. McCulloch announced that Wilson will not face charges relating to the fatal shooting of 18-year-old Michael Brown on Aug. 9, as the grand jury found "no probable cause" to charge him with anything. Social media, however, is definitely guilty.

McCulloch spent 10 minutes on a laundry list of all the great things he did when he presented the case to the grand jury and how Ferguson is just a huge pit of liars, and how lucky the world was that he, Bob McCulloch, was able to guide the grand jury through the hellscape of deception to the sweet Land of Truth, where they found that physical evidence showed Officer Wilson had not committed any crimes.

"Physical evidence does not change because of public pressure or personal agenda," McCullough said. Furthermore, because some witness testimony contradicted other witness testimony, no trial to determine the facts of the case is even necessary. McCullough added that he understands some people might be "disappointed" by the decision, but urged everyone to behave themselves since "the whole world is watching."

While answering questions, McCullough did graciously acknowledge that "no young man should ever be killed by a police officer."

If you're curious about how people in Ferguson are reacting now that the news is out, there will be plenty of well-grounded commentary and entirely called-for hyperbole flowing for the foreseeable future. The area has become re-saturated with members of the media, including many of our favorites: Nancy Grace and Don Lemon are standing by, along with many, many others.

While Ferguson might be facing nearly toxic levels of media attention in the coming hours, the staff of the Wonkette Washington Bureau is sad to note that Fox News cub-reporter-for-life Griff Jenkins is not on the scene, meaning there will be no encore performance of the Great Ferguson Cigarillo Caper. We will have to watch one of the video feeds to see what is happening rather than having Griff & Friends re-enact it for us.

The widespread anticipation in Ferguson that Wilson would not face charges helped to fuel weeks of ongoing unrest, including protests outside the Ferguson police station that led to a handful of arrests this weekend. Good thing Gov. Jay Nixon already preemptively declared a state of emergency, so law enforcement has the necessary authority to bust however many heads it needs to in order to keep the peace.

And speaking of the police, you'll never meet a better prepared squadron of public servants! They've been busy stocking up on spicy pepperballs and those comfy beanbag rounds for all their new friends, not to mention the special training they've had on how to "win the media" in the event they should happen to shoot the people they're paid to protect.

Whatever happens in the coming days, we can only hope that the people of Ferguson and its surrounding areas will heed the wisdom of our nation's leading moral authority.

Michael Brown was shot and killed on Canfield Drive in Ferguson on a Saturday afternoon in August by Darren Wilson, who remains a free man. Now the people of Ferguson must remember what matters most, according to the governor and law enforcement: you can be mad about a cop getting away with killing an unarmed teenager if you must -- but quietly, please, and respectfully. Or else.

You can follow Beth on Twitter. She'll be the one in the corner with the ice cream.