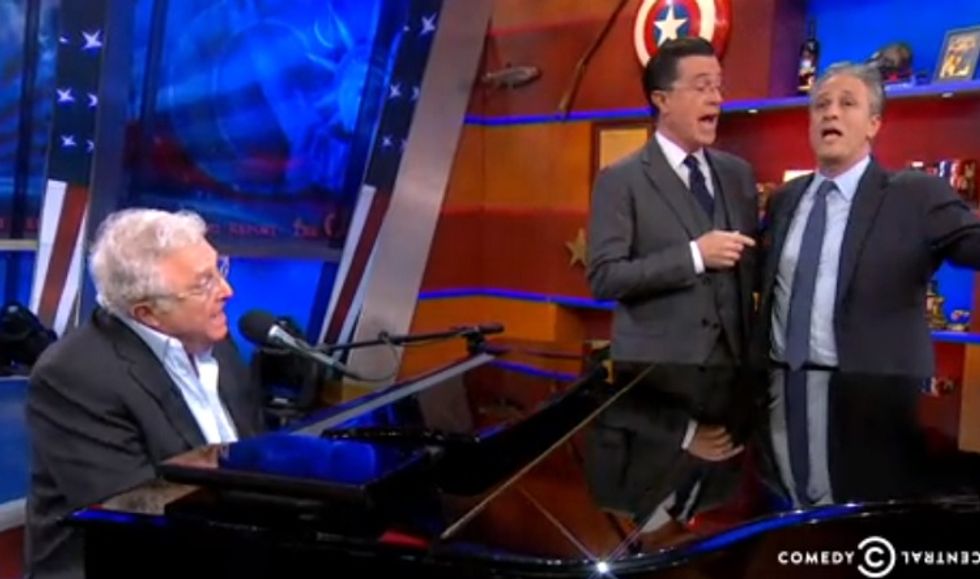 Stephen Colbert did his very last show last night, and while it couldn't possibly top the majesty and brilliance of the Seinfeld finale, it also didn't close out the series with a clip show, either.

After a fun "The Word" segment where Colbert reassured us that Truthiness is still the operative mode of American politics, the show shifted to one of the finest, most over-the-top musical goodbyes on basic cable -- maybe in the annals of teevee -- featuring one celebrity guest after another joining Stephen in an eight-minute extraordinary rendition of "We'll Meet Again." It might just top the use of that song at the end of Dr. Strangelove, with the added benefit of not having to contemplate the extinction of humanity as a counterpoint.*

It started with Jon Stewart... then Randy Newman... and soon it was pretty much a Hollywood/Politics/Media clown car, with a crowd of celebrities and nerd crushes (Terry Gross!**) crowding the set. Sadly, they did not take the opportunity to seize Henry Kissinger and send him to the Hague. Was it a perfect farewell? It would have been if they'd ended with the song; the closing skit with Santa, Abe Lincoln, and Alex Trebek is a bit of a letdown. We'd have ended it with Stephen waking up in bed with Bob Newhart.

Who all showed up? Vox has a near-comprehensive list, which is notable for the week's second best correction:

Correction: The original version of this post misidentified Barry Manilow as Rod Stewart. We deeply regret the error.

The week's best correction, of course, came from a HuffPo piece about the Willie Robertson, son of Duck Dynasty star Phil Robertson, who is working out his own thoughts on whether being gay is something people choose:

CORRECTION: An earlier version of this story incorrectly referred to Willie Robertson as "Willie Nelson" in one instance. This has been corrected.

That's a hell of a slip, and we can hardly wait to see what Colbert does with it... oh, poop. (Willie Nelson was in the Colbert farewell, by the way. Of course. Willie Robertson was not.)

* Your mileage may vary.

** Notably, she's one of the only people with whom Colbert did interviews out of character