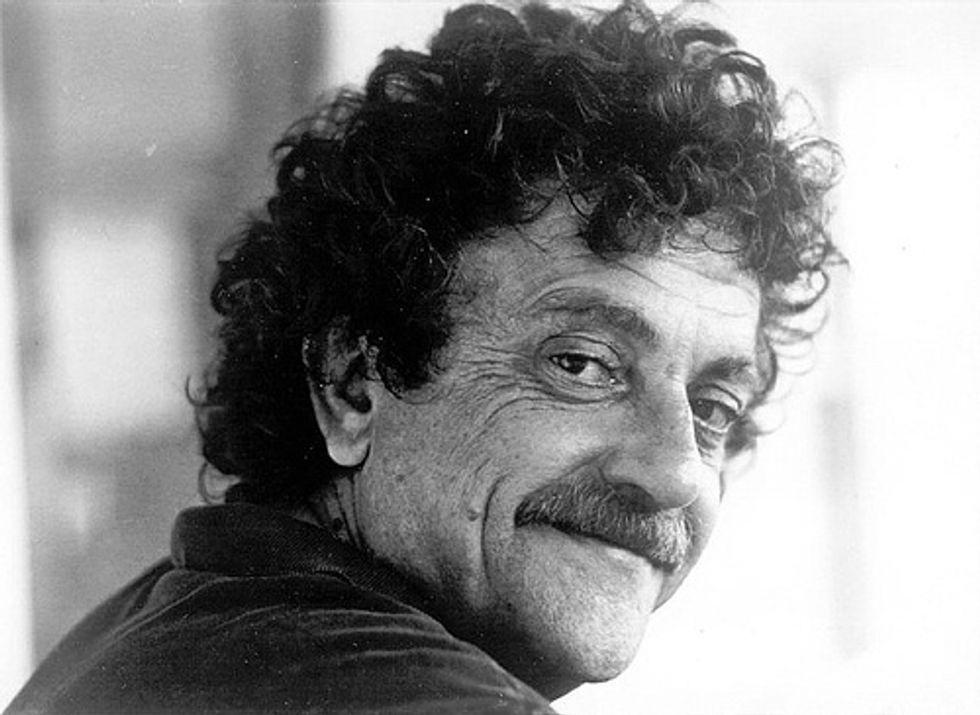 I tell you, we are here on Earth to fart around, and don't let anybody tell you different.

When Nov. 11 rolls around, this quote from Breakfast of Champions gets dragged out of storage and put on display for the occasion of Kurt Vonnegut's birthday and Armistice/Veterans Day. But that's what remembrance and ceremony are for, after all, as mile markers on our half-blind flatcar ride through time. So it goes. And since it remains an awesome quote, and since Vonnegut never feared flirting with cliché (who are we kidding? He dived right in and consummated the relationship), neither will we. Let us indulge -- for a fourth go-round, if you can believe it! -- in another nice rummage through the mental attic with Uncle Kurt:

So this book is a sidewalk strewn with junk, trash which I throw over my shoulders as I travel in time back to November eleventh, nineteen hundred and twenty-two.

It was during that minute in nineteen hundred and eighteen, that millions upon millions of human beings stopped butchering one another. I have talked to old men who were on battlefields during that minute. They have told me in one way or another that the sudden silence was the Voice of God. So we still have among us some men who can remember when God spoke clearly to mankind.

So I will throw Veterans' Day over my shoulder. Armistice Day I will keep. I don't want to throw away any sacred things.

What else is sacred? Oh, Romeo and Juliet, for instance.

And all music is.

It's just such a wonderfully Vonnegut-y quote, for all the terrific reasons there are to love Kurt Vonnegut: the short, clipped sentences; the backwards time travel; the affectation of spelling out the year; the "men who can remember when God spoke clearly to mankind" -- Jesus, what a lovely line! The definitive declarations that sound like pure Truth, but on reflection are, OK, kind of simplistic. The self-aware nostalgia and sentimentality, even as he cautions against nostalgia and sentimentality. And Romeo and Juliet, for chrissakes? Not King Lear, at least? In some ways, loving Vonnegut is such an adolescent thing to do, and sometimes it's easy to feel -- especially if you get into a graduate literature program -- as if Vonnegut is a writer you're supposed to have grown out of. It's a problem of which Vonnegut himself was quite aware, of course, as he acknowledged in his interview with Playboy, also from 1973:

I deal with sophomoric questions that full adults regard as settled. I talk about what is God like, what could He want, is there a heaven, and, if there is, what would it be like? This is what college sophomores are into; these are the questions they enjoy having discussed. And more mature people find these subjects very tiresome, as though they’re settled.

By the time you're in grad school, you know better than to talk about Vonnegut as if he were quite as deep as you were sure he was at 17. Grownup Serious Literature Students are allowed to quote Vonnegut as much as they want, as long as they treat him as an affectionate artifact they've outgrown, like model airplanes hanging from the ceiling or stuffed animals on a dorm bed. And then after you're comfortably past the one-upmanship of a graduate seminar, you can go back to just plain enjoying Kurt Vonnegut all over again, even if you no longer zoom a plastic B-25 Mitchell bomber around your room (though maybe that's more of a Joseph Heller thing, anyway).

The other great Vonnegut quote about Armistice Day turning into Veterans Day comes from Mother Night (1961), and doesn't get quoted nearly as often, but we like it for its explicit grumping about the motivation for the holiday's metamorphosis:

"Oh, it's just so damn cheap, so damn typical." I said, "This used to be a day in honor of the dead of World War One, but the living couldn't keep their grubby hands off of it, wanted the glory of the dead for themselves. So typical, so typical. Any time anything of real dignity appears in this country, it's torn to shreds and thrown to the mob."

We'll agree that the quote from Breakfast of Champions, as Vonnegut worked it out over a decade later, is a grander, more quotable passage, but there's something awfully nice about the raw bitchiness of the earlier version. It's sort of surprising to us that we haven't seen any online pairings of the two, either. After all, yet another of the fun things about reading Vonnegut is seeing him turn over ideas again and again in his novels, taking them through their permutations like a Tralfamadorian looking through time.

There are some things it might be a mistake to grow out of.

And so we'll go on quoting Kurt Vonnegut as much as we damn well please, thank you. We’re still just as happy as ever that four summers ago, we bought Kid Zoom his own copy of Slaughterhouse-Five, which we were relieved to learn he loved. We'd like to recommend giving your favorite books to your kids -- it's a great way to start a conversation, or to keep one going.

[contextly_sidebar id="xzo7S3SvffTyWJRmttculbMGqNSlbRhv"]So happy Kurt Vonnegut's birthday, and a peaceful Armistice/Veterans Day to all of you. Since there are few things more fun than quoting Uncle Kurt, here are a couple of collections of Vonnegut quotes. We added a quote for Armistice Day 2013 that wasn't in the inaugural version of this column:

“Perhaps, when we remember wars, we should take off our clothes and paint ourselves blue and go on all fours all day long and grunt like pigs. That would surely be more appropriate than noble oratory and shows of flags and well-oiled guns.”

[contextly_sidebar id="IsCdlJuNINX82gAjmiekN9GrObtzZWer"]Last Nov. 11, with a beautiful new war in Syria starting and too many people who should have known better urging that we get "boots on the ground" -- let's only talk about the boots, not the young men and women wearing them (children, really! Their cerebral cortexes aren't even grown up yet!) -- our new, cautionary Vonnegut quote came from a 1991 interview, shortly after the first Gulf War:

"We have become such a pitiless people," Vonnegut lamented. "And I think it's TV that's done it to us. When I went to war in World War II, we had two fears. One was we would be killed. The other was that we might have to kill somebody. And now killing is Whoopee. It does not seem much anymore. To my generation, it still seemed like an extraordinary thing to do, to kill."

As we said last time around, we can probably keep adding a Kurt Vonnegut quote about war to this column every year until we run out of quotes, or we run out of wars. At the rate our nation is going, we may run out of Internet first.

[contextly_sidebar id="1Udez7ZxMYa5buRpPMo4uCOIMixaPOv6"]So guess what. Guess what! For 2015, mere weeks after our president (Nobel Peace Prize 2009) apologized to Doctors Without Borders (Nobel Peace Prize 1999) for strafing and bombing a hospital in Afghanistan, killing at least 30 patients, doctors, and nurses, we managed to dig up another Kurt Vonnegut quote about war, this time about the terrible ethical legacy of World War II:

One of the great American tragedies is to have participated in a just war. It's been possible for politicians and movie-makers to encourage us we're always good guys. The Second World War absolutely had to be fought. I wouldn't have missed it for the world. But we never talk about the people we kill. This is never spoken of.

We can keep this tradition up forever, since we'll be in Afghanistan at least that long. Don't worry; if by some fluke a Nov. 11 should come about when Americans aren't in combat somewhere, we can handle it. Vonnegut wrote about a lot of other things, too.

And since Kurt Vonnegut liked music enough to consider it the only really plausible evidence that God might exist, here's a song for Armistice-Remembrance-Veterans Day, Eric Bogle's "And the Band Played Waltzing Matilda," to remember the over 9,750,000 who died during the Great War. There are no living veterans of that war; the last, Florence Green, died in 2012 just two weeks short of her 111th birthday.

Let's try to at least imagine a world where we won't need veterans' parades.

What, one more video? OK, if you insist.