First Black President Thinks He Is Rosa Parks Of Presidenting, What A Dumb Jerk 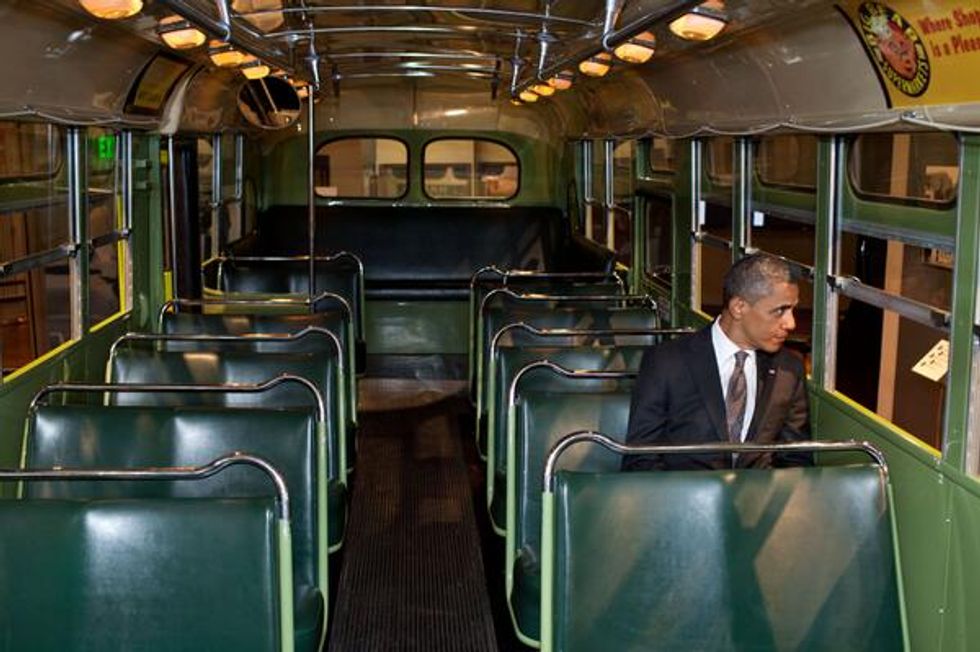 Obama For America, the campaign organization thingy that is in charge of Prezzy Obezzy's twitter feed for some unknown reason, has sent out a VERY OFFENSIVE TWEET "honoring" Rosa Parks by making italllll about the first black president. Why would Rosa Parks have cared fuck-all about a black man becoming president, when she had more important things to do like make sure her bus was on time to get her to her "job" yelling at white people? Way to make the breaking of an important racial barrier all about you, fake Barack Obama twitter!

But wait! Isn't this story sounding a little familiar? Why yes! It is! Neil Munro, the intrepid speak-truth-to-black-power Daily Caller reporter, has recycled almost completely verbatim his complaint about the same thing from last year. So we, being better environmentalists than Neil Munro, will recycle Doktor Zoom's post about Neil Munro's post!

Lest anyone get the idea that the Daily Caller is just a teensy bit racist, they would like you to know that they actually care more about Factual History than certain Presidents of the United States do. For instance, did you know that the Daily Caller’s Neil Munro is very protective of the legacy and reputation of Rosa Parks? It’s true! Saturday was the 57th anniversary of Parks’ refusal to give up her seat to a white bus passenger, and the Daily Caller’s Neil Munro is quite indignant that the White House marked the anniversary by tweeting a photo of Barack Obama sitting in that very bus (from a visit to the Henry Ford Museum back in April).

Well, The Daily Caller’s Neil Munro was not going to stand for such an insult to the memory of a revered Civil Rights leader (who is also conveniently dead now), although they also couldn’t be bothered to actually subtract “1955″ from “2012,” either:

Oh, look, we stopped recycling, because our copy-and-paste finger was hurting. We guess we are not as environmentalist as Neil Munro after all. We guess you will have to incinerate some pixels and click on Dok's story your own bad self, oh well.