First Starbucks Destroys Christmas, Now It's Gay For The Queers? 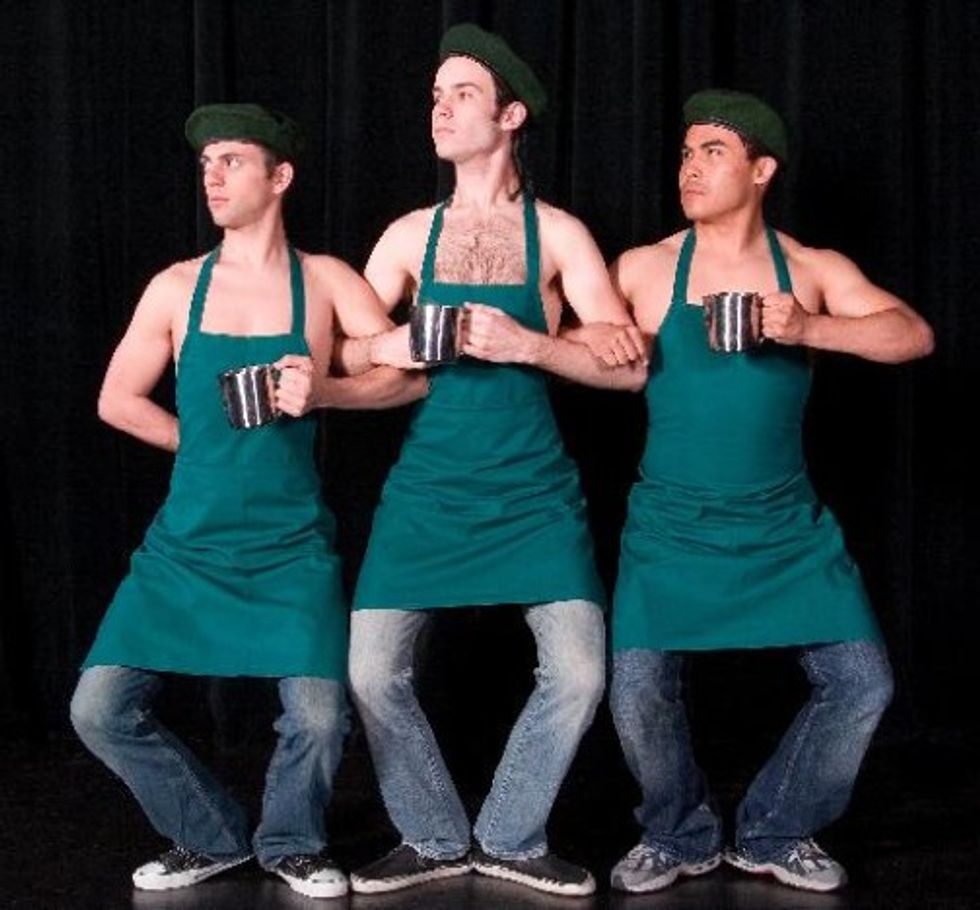 These baristas will keep you safe and warm.

Well, well, well, Starbucks sure has made clear where it stands in the culture wars this week, and it's definitely not on the side of Jesus! First it made a red cup that didn't even have Christmas decorations it, like it thinks liberal Jesus is some sort of minimalist, pffffft. And now it has announced it's joining up with the Seattle Police Department's Safe Place Program, which gives gay and BLT people a "safe place" to go if they've been attacked, hate-crimed or bullied:

[T]he coffee giant has been working since June to implement the program and train 2,000 employees across 97 locations within the city limits. [...]

[Starbucks Seattle area regional director Heather Jennings] said decals with the program’s emblem — a police badge colored to look like a rainbow flag — were affixed to the windows at the Third Avenue and Pike Street store when she made a visit earlier in the day Wednesday.

Gay rainbow flags on police decals, that's just GREAT. (No, seriously, it's just great.) The decals tell LGBT people that their local Starbucks organization is a place where they can safely go for help if they're in crisis. And that's all well and good, but what about the Sincere Religious Belief-Holding Gay-Hatin' Christians who need a "safe place" too? Will there be a decal for Christian cake bakers like Barronelle Stutzman (who lives in Washington state!) that says, "If your religious freedom has been throat-crammed, feel free to use our phones to call the Liberty Counsel?" Of course not, because Starbucks hates Jesus.

Let's look at the Google and find out if any particularly stupid wingnuts are already upset about this.

Good news! College campuses are no longer the only bastions of “safe spaces” protecting fragile minds from challenging ideas. Starbucks has announced it’s now offering the same, protective experience to the LGBTQ community in all its Seattle branches.

The purveyor of overpriced, pretentious coffee has partnered with the city of Seattle to provide a “safe place” of refuge for victims to get “tea and sympathy” with their lackluster coffee while they wait for police to arrive and report alleged “hate crimes.”

Gurl, you are so stupid we are literally LOLing over here. It's just SUPER UNFAIR that Starbucks has to go all "liberal agenda" on motherfuckers, because fundamentalist Jesus knows people currently bleeding out from being gay-bashed are GREAT targets for sharing the Gospel, or at least getting into a debate about why Reagan was the best president of Jesus America. And now whiners like Kristine Marsh will be forced to zip their idiot lips. Where's THEIR safe space? Besides, that faggot over there with his femur sticking out of his thigh is probably a big faker.

We would search more internets for more wingnuts complaining about this, but it would make us hate humanity.

Good job, Starbucks. May your War On Christmas be merry and bright!