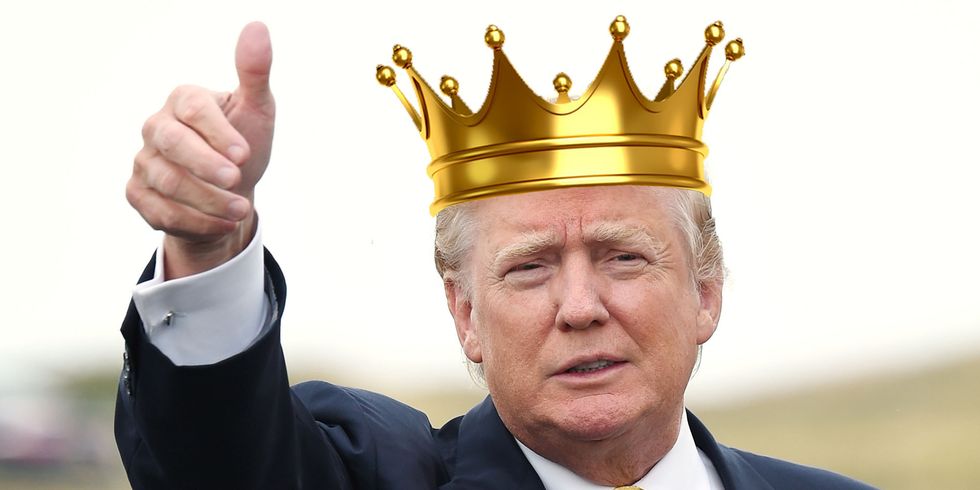 We got five bucks says Donald Trump cancels this press conference -- you know, the one we've all been waiting 168 days for because It's Okay As Long As You're Not Hillary Clinton.

Of course, we had five bucks saying that before the #peehookers story broke.

What can we say, dude is a shitheel.

Liveblogging duties will be handled by Evan most likely, with Dok for the assist, because I, your editrix, am about to pile my husband and dogs and your 18-month-old boss of you into the #wonkebago for to drive to the DC Women's March and also to buy you beers and yell stuff at the teevee during the Inauguration itself! And I haven't even packed! Please send money, for "gas" (grass and ass). "Rebecca, that is a terrible way to start a livebloog about Donald Trump's pee hooker press conference!" you (and Dok and Evan) are probably muttering RIGHT NOW. Don't care!

11:04: OH HEY EVERYONE, we are still waiting on Donald Trump to come out, because he's making us wait like a common Obama. He's probably off somewhere peeing. This is Evan, by the way. Hi!

11:14: Oh look, here is Trump. Who will be our president. Actually. Sean Spicer is introducing Trump, by saying Buzzfeed did fake news and everybody else did fake news, and nobody never peed on Trump.

11:16: We have to talk to Mike Pence first. Jesus Christ, this is stupid. If these fuckers would talk to the press more, we wouldn't have to go through all this rigamarole.

11:23: Donald Trump does not know how to say "industry." He says it like in-DUST-ree. Fucking moron.

11:26: Trump says there is "great talent, tremendous talent" coming to the inauguration. Uh huh, we have been hearing! Like three Rockettes, five Mormons, and some chick who lost "America's Got Talent," right?

11:27: Hey, everybody, did you see Barry Bamz's farewell speech last night? It was so good and wonderful. That's a REAL president. Much better than this, which is weak and sad.

11:30: Oh, he actually said the election was probably hacked by Russia, but that there is "much hacking going on" and stuff about computers and other things and the DNC is dumb and the RNC is more smarter.

11:31: Trump points out that Vladimir Putin was very nice to leak a public statement about how Trump ain't never got leaked on in Moscow, or colluded with Moscow, or got an election stoled for him by Moscow.

11:34: No but seriously, asks a journalist, in Moscow and St. Petersburg, TELL US ABOUT YR PEE STUFF. Trump says he knows about all the tiny cameras in the tiny rooms in the Russian hotels, and he told everybody to BE CAREFUL, because the Russians will tape you. Also, HE ISN'T INTO PEE STUFF BECAUSE HE IS A GERMOPHOBE.

11:38: Trump STILL not releasing taxes, because he says Americans don't care, because he won by SO MANY NEGATIVE VOTES. Yeah, you stupid bastard, fucking give it.

11:39: Trump running away now so his lawyer can talk about how Trump is going to have one million conflicts of interest as president.

11:40: Lawyer lady says Trump doesn't have to worry about conflicts of interest, but don't worry, Trump's groddy-face sons will run his businesses and promise not to talk about it with him.

11:43: All the stuff about Trump separating himself from his organization is basically the stuff we've already heard. Putting things in trust, blah blah, Ivanka quitting Trump Organization to go play first lady in Washington or whatever, zzzzzzzzzzzzzz.

11:48: Lawyer lady says for Trump to actually sell off his organization would make MORE conflicts of interest uh huh ok we are very impressed with her lawyer-ese except not really shut up.

11:51: And now she referred to the "SO-CALLED EMOLUMENTS CLAUSE" and says it doesn't count for Trump, because Trump, and nobody could ever try to curry favor with Trump by paying for a hotel room at one of his ugly properties. HOWEVER. If a foreign government pays dollars to one of his hotels, he will donate those dollars to the United States Treasury, so the AMERICAN PEOPLE will benefit. Um. OK.

11:57: Talking about Obamacare now. We are going to be "very, very proud" of what they do with Obamacare, which is a "complete and total disaster." WHAT THE FUCK IS HE EVEN BABBLING ABOUT RIGHT NOW?

12:04: Trump will build the wall, everybody is excited about the wall, nobody gets the crowds Trump gets, Mexico will pay for it, except Mexico won't pay for the fucking wall, but Mexico has been so nice, he loves the people from Mexico, phenomenal people, except all the rapists, the government in Mexico is terrific OH MY GOD SHUT UP AND TAKE A PEE BREAK, DONALD.

12:06: Donald Trump reiterates that an intelligence leak about him liking the pee is just like Nazi Germany, because he doesn't even know why.

12:08: OOH DAMN, TRUMP OUTRIGHT FIGHTING WITH CNN REPORTER. Called them "fake news." Wouldn't give them a question. And now Trump is talking shit about Lindsey Graham, because he thinks it's still campaign season.

12:10: Trump says "there's nothing that could come back" on the reports of his collusion with Russia, which, you will note, is not quite the same thing as saying there is absolutely no truth to the allegations, HUH DID YOU NOTICE THAT?

12:12: Trump still really mad about intelligence reports being leaked to the press. Yeah, bro, get the fuck used to it, because A) this is America and leaking is one of our greatest traditions and 2) the intelligence community hates the fuck outta you.

12:15: Yadda yadda, Trump says Vladimir Putin shouldn't hack things, he doesn't think Russia will hack more. Original part of question was, "Can you say once and for all that there was no contact between your campaign and Russia?" UNANSWERED.

12:16: AND IT'S OVER! Next presser will be in two years and he'll just round up all the journalists he tricks into showing up and take them to the camps. BYEEEEEE.