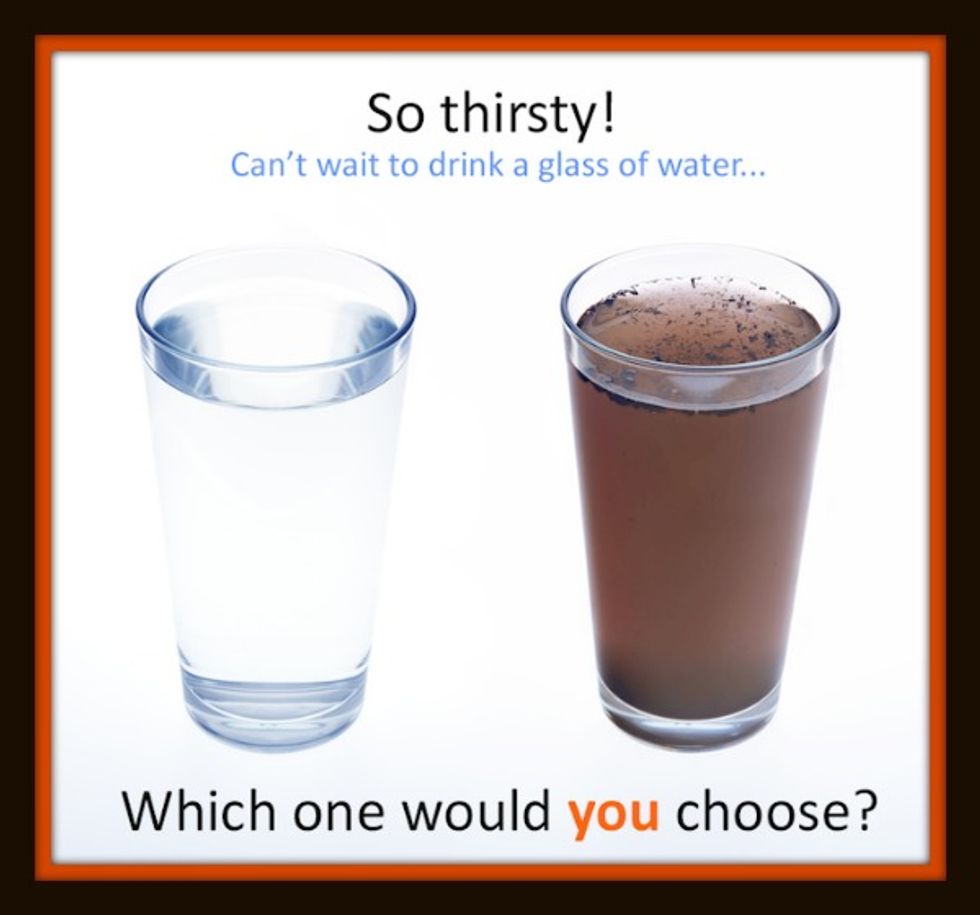 sorry flint residents, you don't actually get a choice

On a scale of "one to rending your garments because Donald Trump actually becomes president," how mad are you already today? Maybe a six or so? Cool. We're here to nudge you up the scale, because we bring you more news of Flint, Michigan's water crisis, which is a horrible thing that is sometimes hard to make fun of! There is literally no way to make a buttsex joke about it or relate it to the Duggars, but we soldier on for you dear readers, because we love you.

News broke yesterday that while everyone in Flint was drinking and bathing in what was basically toxic sludge and Rick Snyder's corrupt little cabal was telling folks in Flint that the water was just dandy and no, water has always been a rusty brown color, why are you asking?, Snyder and Company were actually pretty hep to the fact that the water was fucking undrinkable. So undrinkable, in fact, that they trucked in water coolers to the Flint state office building so that state office workers could enjoy cool refreshing water (or hot beverages! don't forget about delicious non-toxic hot beverages!) instead of the shit that the people in Flint were stuck drinking.

But wait! Surely there's an explanation for behavior this outright crass and repugnant? Why, yes there is! See, the Snyder administration's post-disaster spin on this is "well, sure we brought in water, but it wasn't because of lead, it was because there was fucktons of OTHER terrible stuff in the water."

The state provided its workers in Flint with bottled water in January 2015, 10 months before officials would tell residents the water was not safe to drink [...]

The decision was unrelated to elevated lead levels that were later found in Flint’s drinking water, said Caleb Buhs, a spokesman for the state Department of Technology, Management and Budget.

Instead, the management and budget department decided to provide water coolers in a Flint state office building after the city sent out a notice saying it had been found in violation of the state’s Safe Drinking Water Act because of high levels of disinfection byproducts. [...]

“This was DTMB acting as a manager of the building and as a customer of Flint water,” Buhs said. “We received this notice and took steps for the tenants of that building.”

Oh, well if it is was only that the residents of Flint were going to be drinking disinfection byproducts or whatever, that is probably fine because we do not even know what that is, so it can't be that bad. Oh wait. We Googled it, and the byproducts are basically what gets created after you dump chlorine in the water to kill other bits of nastys, and the byproducts are ... let's say suboptimal.

Some studies have found that people who drink chlorinated surface water have a higher risk of developing cancer of the bladder, rectum and colon.

Other investigations have suggested that chlorinated drinking water may contribute to the risk of birth defects of the brain and spinal cord. Several studies have found that exposure to chlorinated surface water may result in reproductive health effects, such as low birthweight babies, premature births, and miscarriages.

Oh, well that doesn't sound so -- WAIT YES THAT IS ALSO FUCKING BAD FOR PEOPLE. Only in the Snyder administration could "well, this water could maybe give you birth defects, but hey, it's not lead-laced!" be a positive way to frame something.

We actually feel kind of bad for you, Mr. Caleb Buhs, spokesman for the state technology and whatever else department, because it probably was not you who made a decision this gross, but you were still the one stuck trying to sell Flintians on this explanation Thursday. Perhaps when the residents storm the Michigan government and tear Rick Snyder limb from limb, which is actually probably too good for him, they will spare you, Mr. Buhs. No promises.