Flint's Poison Water Now With Even More Poison! (Rick Snyder Not Yet In Jail) 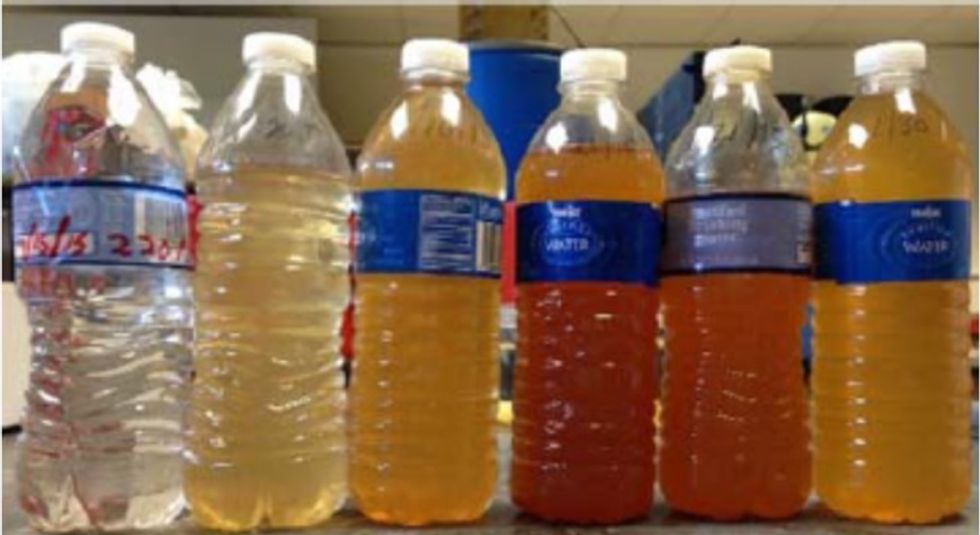 [contextly_sidebar id="UuNFep3y1BnMQDr2Vk3fa62n3G5XBCNq"]Bad news, citizens of Flint: You know how charities and the state of Michigan have been delivering water filters that are supposed to filter out the lead that's been leaching into your tap water for nearly two years? Well, funny thing. Even after the city's water supply was switched from the corrosive Flint River to nice clean Lake Huron water from Detroit, and even after anti-corrosion chemicals were added in hopes that they'd stop or reduce the damage to existing pipes, we learned Friday that in many parts of Flint, lead levels are far higher than home filters can handle. Oops. Perhaps the only good thing to be said about the latest discovery is that city, state, and federal officials immediately held a press conference to warn Flint residents that they shouldn't use even filtered tap water until they've had their home's water tested. How bad is the new bad news? Face-smackingly bad:

While no level of lead in water is safe, the Centers for Disease Control recommends action be taken to minimize exposure whenever lead levels exceed 15 parts per billion. So in some areas of Flint, the water is only ten times the level that constitutes an emergency. In other homes, it's 267 times as bad as what's already the danger zone.

The upshot: Even if Flint homes have filters, they need to get their water tested to see whether the lead level is under 150 parts per billion -- and only then to rely on the filters (and change the cartridges regularly). Pregnant women and kids under 6 should drink only bottled water.

On the up side, most homes in Flint are safely below that 150 parts per billion level, so filters will do the job, once the water's been tested. And in a desperately needed bit of nice-time news, over the past weekend, over 300 union plumbers from around the country came to Flint to install new faucets and water filters in roughly 800 Flint homes at no cost to the residents, so there's a start. Flint's population is about 100,000, so it's going to take more than the generosity of union plumbers to permanently fix things.

Rachel Maddow, who has been covering the Flint story with a passion that should inspire people to go to J-School, was incredulous in her Friday broadcast:

It is essential that all Flint residents have the water in their homes tested as soon as possible. Please make it a priority for your family and encourage your friends and neighbors to obtain testing kits as well. The kits are available free of charge at the water resource sites within Flint fire stations.

This set Rachel off, just a teensy bit. Have you seen Rachel when she's angry? We like her when she's angry. She points out that the handy-dandy test kits, which fire stations initially ran out of, aren't exactly the most convenient things to deal with, especially in a city with a 40% poverty rate. Especially when you consider that the people of Flint didn't ask to have their water poisoned:

Then Rachel Maddow did something we don't recall ever seeing her do. She growled:

She also suggested another short term solution for Flint residents: head to the government office buildings with water jugs to fill with the bottled water state workers have been getting for months. We would like to see Rachel Maddow sit down with Rick Snyder to talk about this. He might want to have a desk between them, though.

The only thing that will fix Flint's water crisis, of course, is not bottled water or filters or lead testing, or even volunteer union plumbers, god bless 'em -- all good things in the short term. What Flint really needs is for virtually all of its water infrastructure to be replaced, at a cost that Mayor Karen Weaver said could reach $1.5 billion. All because Flint's emergency managers, appointed by Snyder, determined they could save some money by switching from Detroit water to Flint River water, and after the switch, decided that the cost of adding anti-corrosive chemicals to the river water -- a whopping $140 a day -- simply wasn't justified. Thank god the party of Fiscal Responsibility is still in charge of fixing Flint, huh?