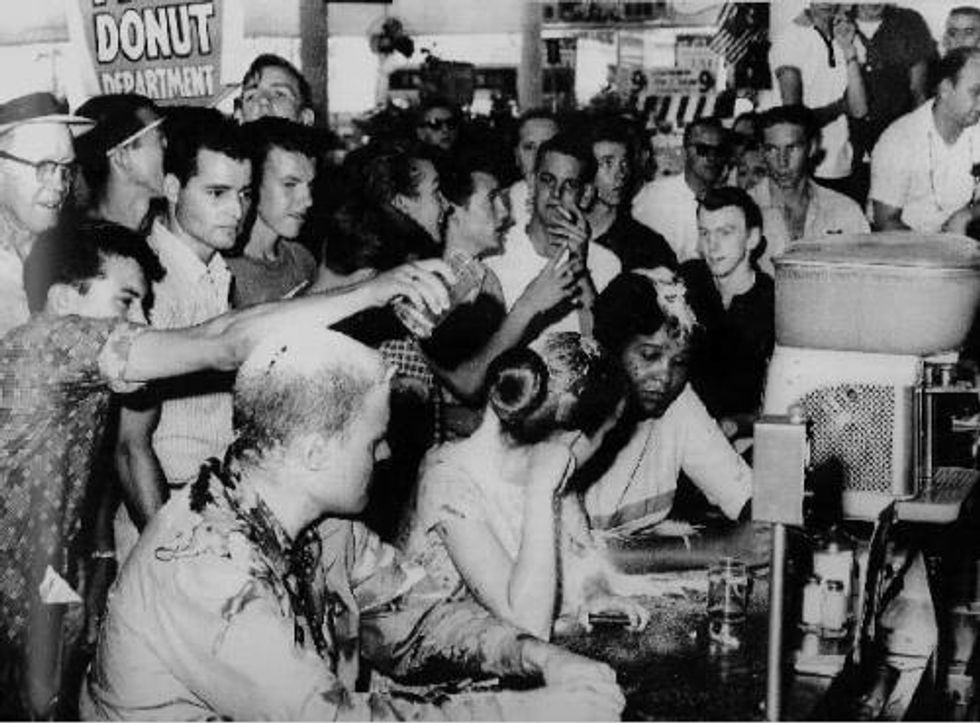 Now look, maybe you commie hippies think that the Civil Rights Act was a pretty good idea. It was was signed into law 50 years ago, George Bush celebrated its anniversary last week with a Lyndon Johnsonesque dick joke and all. But have you given any thought to whether it's actuallylegal? Freshman Florida congressbagger Ted Yoho held a town hall Monday in Gainesville, where he fielded a question from a voter named Melvin Flournoy, a 57-year-old African American, who asked if Yoho thought "any part of" the Civil Rights Act was constitutional. As the nice folks at Think Progress put it, "The easy answer in this case — 'yes' — has the benefit of also being correct." But for Ted Yoho, that's a really weighty question that he was not prepared to rush to judgment on:

This country grew through a lot of growing pain. We’re going through it again. As we grow as a country and prosper, we’re going to go through it again in the future. That’s why I’m so thankful for the Constitution because it allows us to do that. Is it constitutional, the Civil Rights Act? I wish I could answer that 100 percent. I know a lot of things that were passed are not constitutional, but I know it’s the law of the land.

Honestly, how can people even know these things? Sure, the Supreme Court found it Constitutional just months after it was passed, but that was the Warren Court, and we know it was full of dangerous radicals. Let's not rush into anything here. Besides, didn't the free market take care of segregation? Pretty sure we just read that in a textbook.

Mr. Yoho now joins Sen. Rand Paul among the Teabagger Elite who have expressed grave doubts about the Civil Rights Act of 1964 and its worrisome implications for Freedom. After all, if you don't have the right to decide that you don't want black people -- or for that matter, white people -- spending their filthy money in your diner or motel, can you truly be said to be free? Maybe this "equal access to public accommodation" stuff is a bit too much, too soon. After all, now that racism is a thing of the past, do we even need the federal government interfering in every mom and pop diner's business?

Yoho does at least seem to accept -- perhaps with a heavy heart -- that the Civil Rights Act actually is the law of the land, at least until maybe John Roberts, Antonin Scalia, Samuel Alito, and Clarence Thomas can gut it. But as Yoho pointed out last year, the real legacy of Martin Luther King and Rosa Parks isn't some musty old law that legitimizes federal power grabs -- it's the brave effort to eliminate Obamacare, just like those heroes of freedom:

“It only takes one with passion — look at Rosa Parks, Lech Walesa, Martin Luther King,” said Representative Ted Yoho of Florida [...] People with passion that speak up, they’ll have people follow them because they believe the same way, and smart leadership listens to that.”

Following the town hall, Mr. Flournoy told reporter Scott Keyes that he was not especially surprised with Yoho's uncertainty about the constitutionality of the Civil Rights Act:

“I wasn’t surprised,” he told ThinkProgress ... “but I was disappointed that he doesn’t support the Civil Rights Act,” noting that it’s one of the most important pieces of legislation in American history.

Of course, that's just the sort of comment you get when you ask whether a law is fair or just for everyone, rather than whether it accords with the very strange definition of freedom that the Tea Party endorses, which is that it's far more important for a business to be able to discriminate than it is for the government to force some crazy notion of "fairness" on the marketplace. Ted Yoho's more of a big picture guy on these issues.

Follow Doktor Zoom on Twitter. He won't be surprised if the teabaggers start complaining that Brown v. Board of Education is discriminatory.