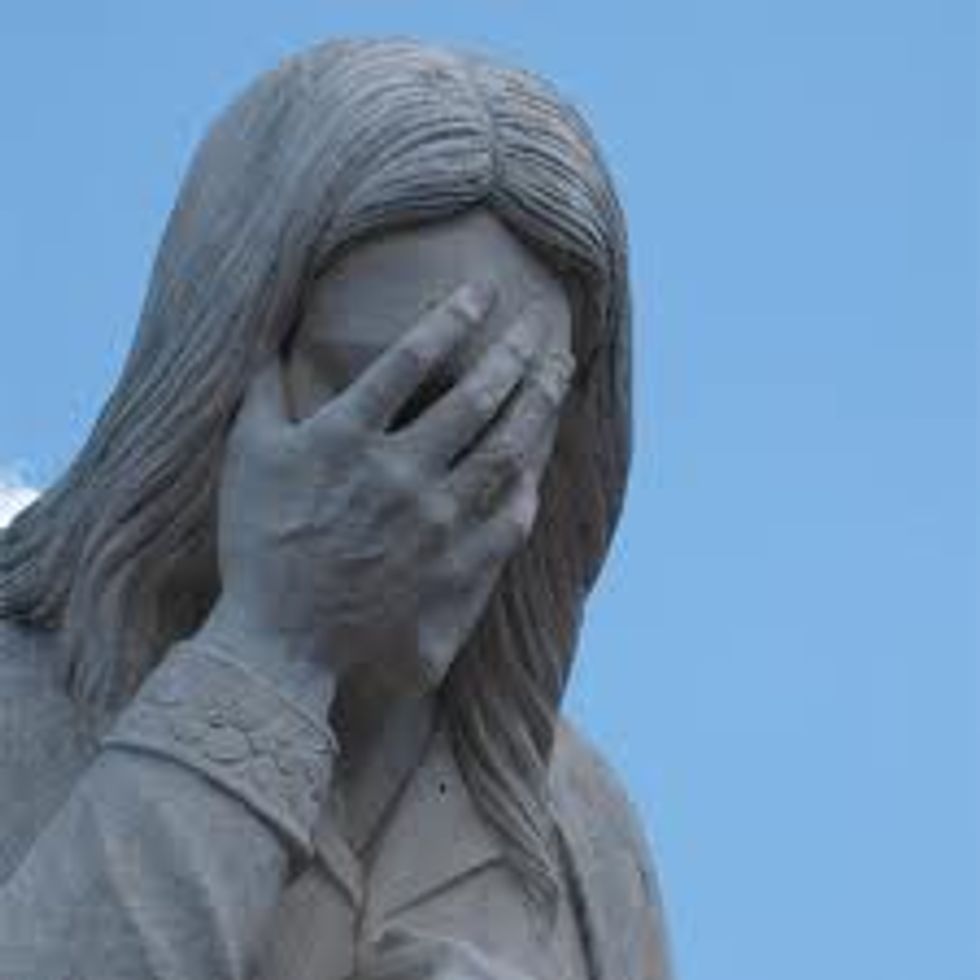 Sometimes, life just sucks. Not the Oh God What Did Glenn Beck Say This Time sucks, but the for reals, what is wrong with the world kind of suck. The kind that leaves you wanting to weep, drink heavily, and then weep some more. This is one of those times, perReuters:

An eight-year-old Yemeni girl died of internal bleeding on her wedding night after marrying a man five times her age, a social activist and two local residents said, in a case that has caused an outcry in the media and revived debate about child brides.

There are about eighty gazillion things wrong with that sentence. And you wanna know an additional terrible part? There was a bill in Congress to help deal with this very issue... you'll never guess which party killed it!! (Spoiler: It was Republicans.)

First off, let's review the awfulness that is this news. An eight-year-old GIRL was married to a FORTY-YEAR-OLD man. GROSS. And awful. And fucking fucktastically wrong. And what exactly caused the bleeding of this little girl?

"On the wedding night and after intercourse, she suffered from bleeding and uterine rupture which caused her death," Othman told Reuters. "They took her to a clinic but the medics couldn't save her life."

Yeah, you read that right. After the FORTY-YEAR-OLD MAN bedded his child bride, the poor girl died from internal bleeding... probably because she was a FUCKING CHILD.

This is awful and terrible and you are probably crying at least on the inside. And fuck it, on the outside, too.

A few years ago, some Legislative Badasses, Sen. Dick Durbin (D-IL) and Rep. Betty McCollum (D-MN), were all like, child marriage is TEH WORST, and introduced a bill, the International Protecting Girls By Preventing Child Marriage Act. Long name, but it gets to the point eventually. And the Senate even passed it UNANIMOUSLY in 2010. What would this bill have done? Per Foreign Policy:

If passed, the bill would have authorized the president to provide assistance "to prevent the incidence of child marriage in developing countries through the promotion of educational, health, economic, social, and legal empowerment of girls and women."

Yeah, that sounds about right. Sounds like something the American people can get behind. Maybe we disagree about some things, but for all that is good and just in the world, can't we all agree that GODDAM EIGHT-YEAR-OLDS should not FUCKING MARRY FORTY-YEAR OLD MEN?!?! Apparently, we can't all agree on that. No seriously, we can't all agree on that, because as we said before, sometimes the world is a giant sack of suck, wrapped in awfulness, tied off with a bow of despair. One night in 2010:

Ileana Ros-Lehtinen (R-FL) defeated a bill Thursday evening that would have committed the United States to combating forced child marriages abroad, by invoking concerns about the legislation's cost and that funds could be used to promote abortion.

Sure, it would cost some money to try to prevent CHILD BRIDES from marrying. But abortion? Hahaha, fuck you 8-and-9-year olds! Because the GOP is a party of whakadoodles, you have to get married to old men, because if you are twelve and pregnant, god forbid you have any chance at all at getting an abortion. Then again, if you are 12 and married and pregnant, we can probably safely assume that you have worse things to worry about.

But fear not, good wonktarians. In a rare triumph of Congress doing something right, Sen. Durbin slipped in some of the child marriage bill language into the Violence Against Women Act that passed in January 2013 (Yeah, the same one that many Republicans voted against). So now the U.S. government is doing a little more to prevent atrocities like this from happening. If the bill had passed in 2010, we would probably be further along in preventing things like this, rather than reading about them in the news. Fuck you, Ileana Ros-Lehtinen.

On the up side, there are several organizations, like CARE and UNFPA, that are out there making a difference. After you come out of your drunken haze, and if you haven't given all your monies to Wonkette, consider sending them a few bucks.

PS - When is that Happy Nice Time People thing starting? Cause we could use it about now.