Florida Democrat Alan Grayson's Mouth No Longer Most Dangerous Thing About Him, Allegedly 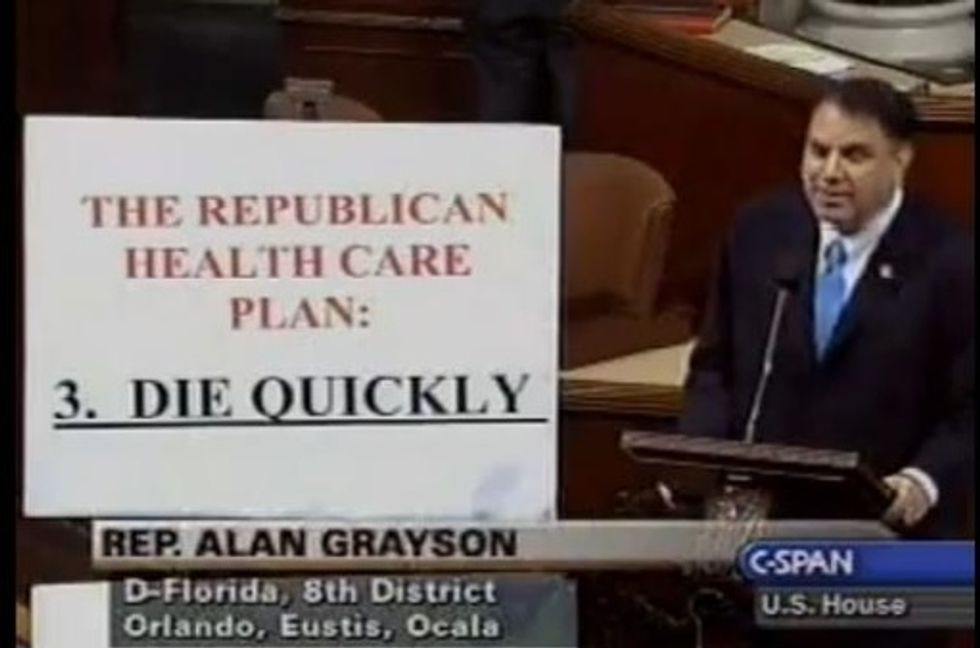 So here is one of those stories that you really hope turns out not to be true, but it doesn't look good: Florida Democrat Alan Grayson has beenaccused by his wife of having a “history of physical violence,” and a judge has issued a temporary protective injunction against him following an incident Saturday in which she says he shoved her against a door.

Yes, yes, innocent until proven, and they're getting divorced so tempers run high, and Grayson's office issued a statement saying that Lolita Grayson's claims are "absolutely false, completely unfounded, and clearly designed to vilify and harm Congressman Grayson" and also claims that she attacked him. But she's the one whose filing for a protective order included photos of "large bruises to her left leg and left shoulder." And we know that judges tend not to just issue protective orders based on a whim; the Orange County Sheriff's Office is also conducting a domestic violence investigation. So, much though we like Alan Grayson as a politician, it's looking like this mommyblog may have to shake its head and wonder how somebody we liked so much could turn out to be such a violent asshole, allegedly.

Icky details from the Orlando Sentinel: Lolita Grayson filed for divorce in January after 24 years of marriage, and the couple separated. According to the petition for the protective order, the congressman "showed up, unannounced" on Saturday and asked to come in, she said no, gave him his mail and asked him to leave, and then he

"deliberately and with force pushed [Lolita Grayson] very hard against the front door, causing [her] to fall to the ground as a result," the petition states.

She told her husband not to touch her, then pushed him in the face and kneed him in the stomach "in order to protect and defend herself" before calling 911, her petition says.

As she was talking to the operator, Alan Grayson told his wife, in the presence of their children, that she "would receive nothing" in their divorce and would be left "in the gutter," the petition states.

The complaint also says Alan Grayson occasionally "has battered [her] and the parties' minor children" in the past, although this is the first time she's reported it.

From the "he said" column, the statement from Grayson's office claims,

"Sadly, it was Ms. Grayson who physically attacked the Congressman as he attempted to visit with his children. He did not respond to Ms. Grayson's violent assault," the statement said.

It added that Lolita Grayson has become "increasingly erratic" since filing for divorce, and her husband "is deeply concerned by her recent behavior and is profoundly pained by her accusations."

An aide to Alan Grayson witnessed the incident and told the Sentinel that Grayson never pushed or hit his wife, so there's that, all wrapped up in questions about how neutral a witness the guy could be. The temporary injunction will remain in place until the parties appear before a judge March 20.

In the meantime, we figure the political blogosphere will quietly and respectfully let the investigation and court case go forward without a lot of excessive speculation or wild generalizations based on scraps of news reports, because we know that people on the internet are basically inclined to sober reflection on stories like these.