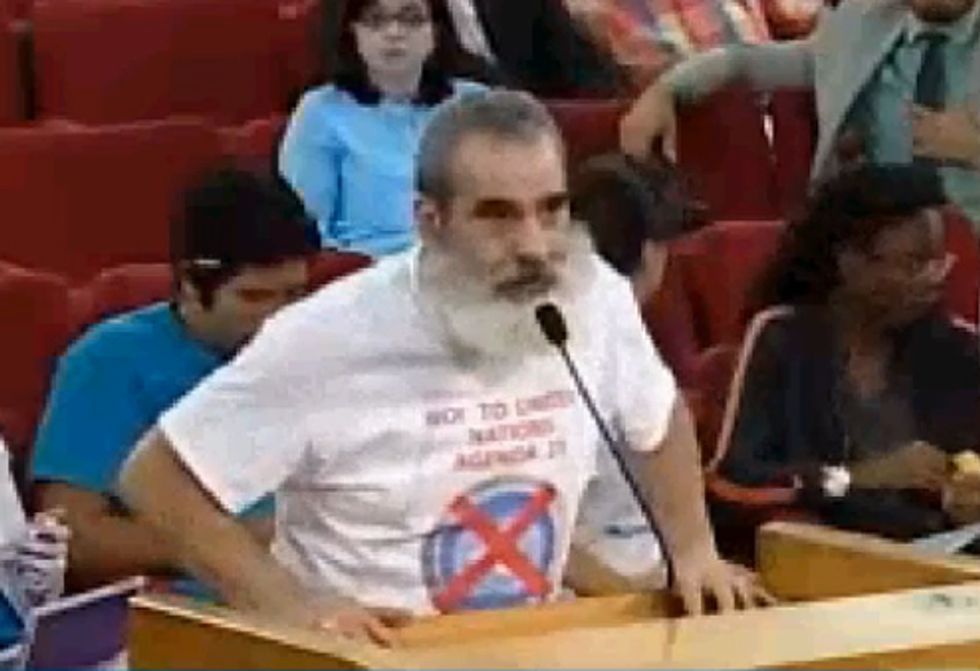 Meet Jose Antonio Fernandez, who has had all he can stand of Governmental Overreach, and by god he is fed up with the dictatorial Powers That Be. So that's why he went to aMiami-Dade County Commission meeting to protest the seizure of his nursery just for refusing to pay his fines for his crimes against the environment. And when he simply pointed out that the U.S. Constitution allows him to use a Second Amendment solution against the commissioners, he got arrested, which pretty much proves that we do live under tyranny.

The Miami Herald explains that Fernandez's nursery owed the county $316,000 in restitution following a 2011 court decision; Fernandez hasn't paid any of it. The nursery has already been seized, and now his house is set to be sold at auction to defray the unpaid fine. And so Fernandez showed up at the commission meeting in his best "No to United Nations Agenda 21" T-shirt and let the commissioners know that he was not going to stand for being treated like a victim of Castro's Cuba:

“You confiscated my land already,” he said.

“Now you want my house. I came here to tell you in public, if you sell my house, the ‘bleep’ is going to hit the fan,” he added, apparently more comfortable making threats than cursing. “And I’m going to board the entire house with me inside” [...]

“I dare you to sell my house,” Fernandez told commissioners Tuesday. “You have become tyrants. You have become a corrupted government. You have destroyed my family. And hundreds of families.

“And I said: enough. I am the people. And the time that you sell the house, my constitution gives me the right to shoot every one of you,” he concluded, pointing at the dais. “Shoot ’em.”

Chairwoman Rebeca Sosa, apparently unwilling to accept the simple truth of the Constitution, directed two sergeants-at-arms to remove Fernandez from the building, because that is what we've come to in Obama's America. Heaven knows that in the days of the Founders, people got to shoot county commissioners all the time, or at least promise to. As Fernandez was taken away, he could be heard yelling “Enough is enough! This is America!”

Fernandez is being held on "13 felony charges of threatening to harm a public servant -- one for each of the 12 commissioners present and for Mayor Carlos Gimenez -- and a misdemeanor charge of disorderly conduct."

As of yet, no militia loons have turned up to surround Fernandez's house, possibly because all of them are busy typing internet comments about how they're headed to Texas to protect the border.

Follow Doktor Zoom on Twitter. He likes to rant about the Ninth Amendment at council meetings, but nobody remembers that one.