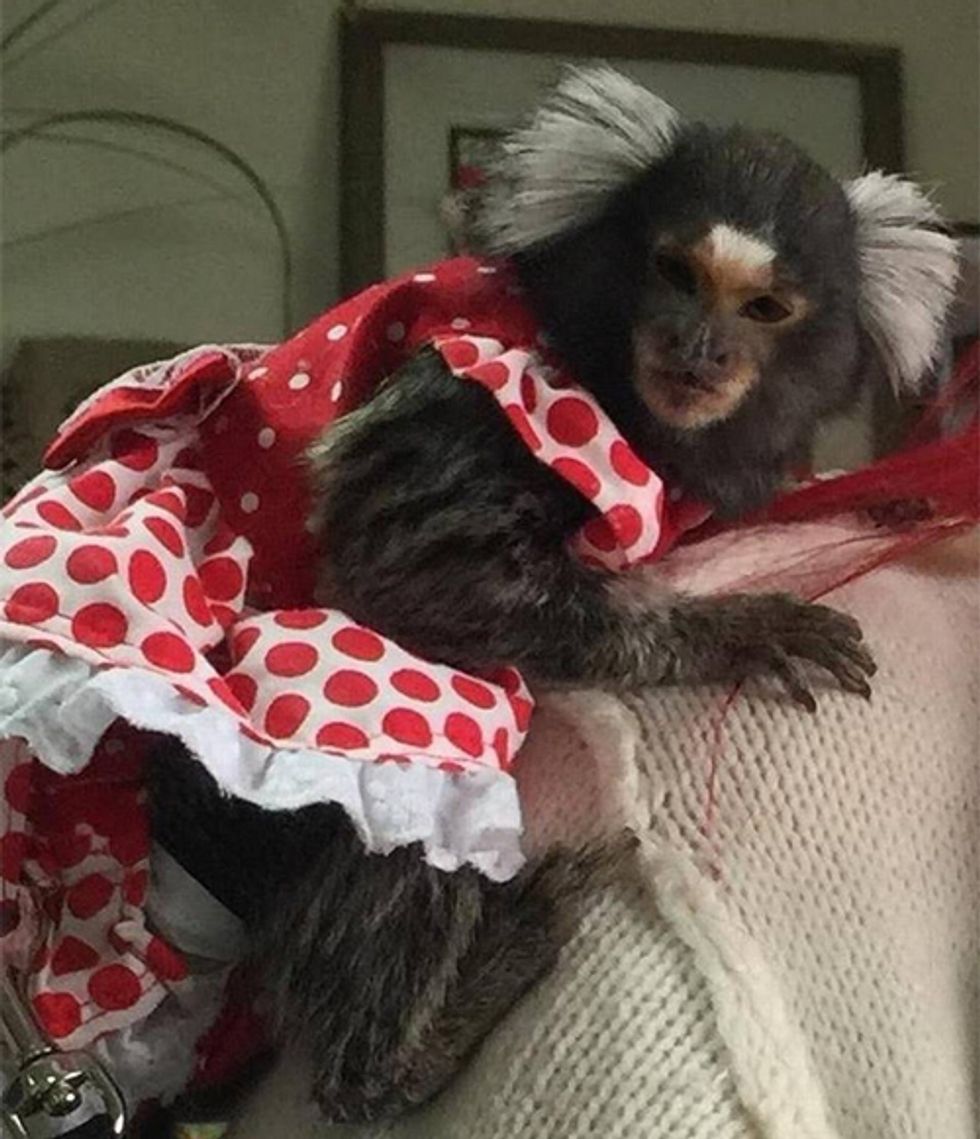 It sounds like a story straight out of a Carl Hiaasen novel, so of course the Man Himself noticed it:

Here's how the Miami Monkeynapping went down, according to the Miami Herald.

Last Friday night, Vanessa Di Gennaro was doing some cleaning in her trailer home at the Aquarius Mobile Home & RV Park in Homestead and had put her pet white tufted marmoset, Zoe, outside on a leash, because why even clean the mobile home if there's a 2-pound monkey running around the place? Di Gennaro is one of those pet owners who goes a wee bit overboard, buying the animal custom dresses and such. While she worked, she could hear Zoe “singing and chirping,” said Di Gennaro, who added, "She sounds like a bird." When the singing stopped, Di Gennaro went out and saw the leash, but no monkey. A frantic neighborhood search ensued, with Di Gennaro walking around the mobile home park yelling the monkey's name late into the night, to no avail. She distributed fliers offering a $1,000 reward, and eventually received a phone call from a neighbor who said a man in a trailer two spaces away had the monkey, but the man insisted he knew nothing about no monkey. “He said he didn’t know what I was talking about,” Di Gennaro said.

The plot then, as plots involving monkeynapping will, thickened. One of the more cryptic paragraphs of the Herald story says,

But Di Gennaro secured a video taken by the person who saw the monkey in the man’s trailer. After he continued to deny having Zoe, Di Gennaro turned to Homestead police.

How did this neighbor come to have video of a missing marmoset? Was he or she peeping on the neighbor after hearing monkey chirps? Or was he or she a friend or associate of the monkeynapper who decided to help Di Gennaro? What motivated the neighbor, and why did they wait a day to contact Di Gennaro -- the desire to do the right thing, or some falling-out with the marmoset nabber? You get the impression the Herald isn't telling us the whole story here.

In any case, once the cops showed up, the suspect neighbor, Oscar Leiva, 21, offered a less than credible story:

Leiva told police he saw Zoe in his kitchen and he thought she was a rat and caught it. He then realized it was a monkey and put it in a cage, an officer wrote in a report.

Leiva was arrested and charged with grand theft and is being held in Miami-Dade’s Turner Guilford Knight Correctional Center on a $5,000 bond.

Ah, yes, the old "fell asleep and the monkey escaped" ploy. But wait a damn minute here. First the neighbor took the video, and now the neighbor only "told Di Gennaro about" it? How does the neighbor know all this? We need Errol Morris or NPR's Serial podcast to sort this out. In any case, after a day of anxiety over her purloined primate -- including a fear that whoever ended up with Zoe might feed her something "toxic," like onions -- Di Gennaro was reunited with Zoe Monday after the story blew up on Miami area media. She even doubled the reward she was offering, to $2000. Now, in a real Carl Hiaasen novel, Di Gennaro would have had to turn away any number of creeps bringing in hastily acquired fakes. As it was, she received calls from would-be monkey-finders all over the state, including someone who claimed they'd found a monkey in Key West.

Eventually, a "Good Samaritan" contacted Di Gennaro through Facebook, saying someone had tried to sell the monkey to her, but that she recognized Zoe from the news.

Police rescued the monkey soon after and returned her. She’s in good shape, if a little skinnier, she said. And the woman who found her is a monkey mom herself, so she doesn’t want to accept the reward.

Yes, this is a person who calls her pet monkey her "kid" and her "baby," and the Miami Herald notes that she's eight months pregnant, so we're sure her actual human baby won't end up with any weirdass psychological problems later. Here's hoping Di Gennaro doesn't leave the real baby outside while cleaning. Still, the story has a happy ending:

“In the last couple days I’ve experienced the worst and the best of humanity,” she said, “and there are a lot more good people than bad out there.”

It's not quite Anne Frank's declaration that "In spite of everything I still believe that people are really good at heart," but for a stolen monkey story, it'll do.