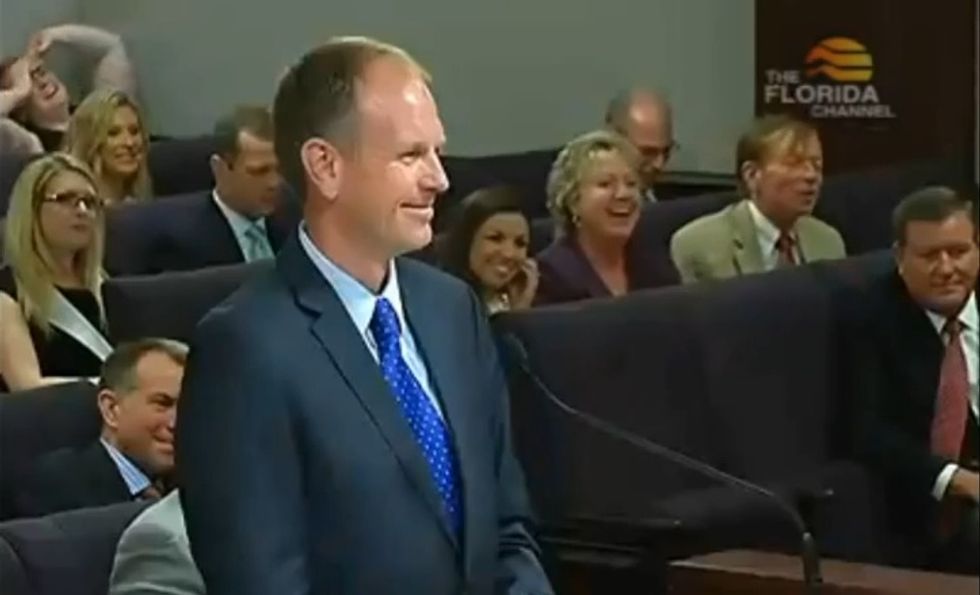 Florida's Senate had entirely too much fun taunting Gov. Rick Scott's head of emergency management last week, trying to get Bryan Koon to say the words "climate change," which, as we all know, is a Banned Word of Power in Florida's executive branch these days. And who can blame them? Who wouldn't love the chance to make the guy squirm, knowing that he has orders -- even though of course Scott says there's no ban on the words. Really? Then why won't you say those words, Mr. Koon? You know the words. SAY THE WORDS.

The mean climate bully here is Democratic state Sen. Jeff Clemens, asking Koon about the new FEMA policy that requires states to document that they're prepared for the effects of global warming in their emergency mitigation plans. Gosh, Mr. Koons, doesn't FEMA require you to plan for climate change? As it turns out, the specific budget request Koons was testifying about is unaffected by the new FEMA directive, but he acknowledged that "the next iterations" of the state's mitigation plans "will require them to have language to that effect."

"I used 'climate change,'" Clemens replied, "but I'm suggesting that maybe as a state, we use the term 'atmospheric reemployment.' That might be something that the governor could get behind." In the video, the guy you hear laughing like Tom Magliozzi is committee chairman Sen. Jack Latvala.

Clemens just wanted to be sure, though, that the state is complying with the FEMA directives, even if Gov. Scott thinks it's all hooey. Koons happily acknowledged that his department sure will, and that the next mitigation plan, which has to be submitted by 2018, "will be required to have language discussing that issue."

"What issue is that?" asked Clemens, grinning with almost criminal glee.

"The issue you mentioned earlier," Koon deadpanned, as Sen. Latvala laughed so hard, you'd think the laughter laughing had been dubbed in. But no, let the record show: Latvala was laughing so hard he had to turn his chair around to get out of range of the mic on his desk.

Yr Wonkette strongly recommends that all members of Florida's press corps immediately adopt this tactic: Try to bait Rick Scott and his underlings -- especially the underlings, who are more likely to know just how stupid the ban on saying THOSE WORDS is -- into trying to avoid saying "climate change" at every opportunity. Then go back and taunt them a second time.