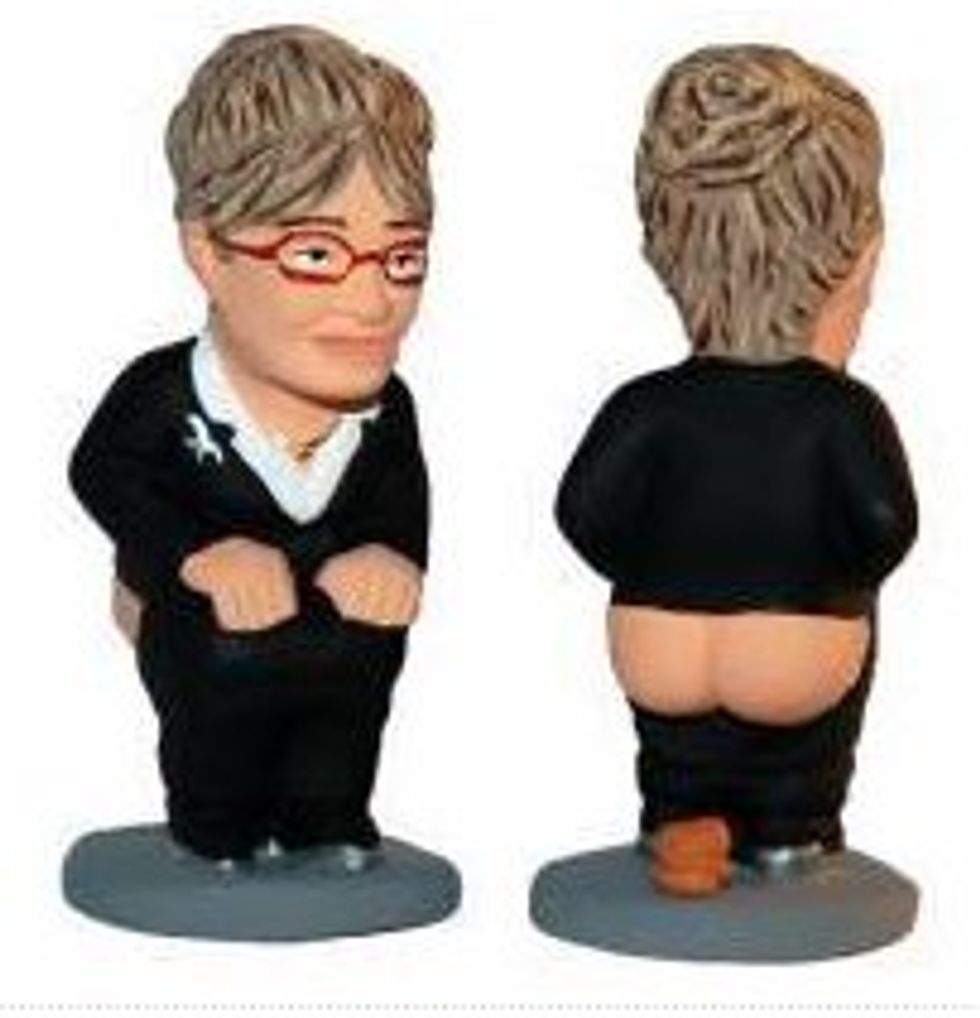 Outside of America, the world is apparently filled with various foreigners. What do they do, and why? These answers mostly elude us, but occasionally we can get a glimpse of the mysterious ways of the foreigns, especially if there's an "American politics angle." For example, in parts of Spain there is an ancient tradition of placing a whimsical figurine called acaganer within the region's elaborate nativity displays. Caganer means "little pooper" -- because that's what it is, and that's what it does. The caganer is a mischievous figure always found within the Christmas displays of Catalonia and Valencia, as well as in parts of Italy, France and Portugal. It is always seen crouched with its pants around its ankles, with a pile of poop behind it. And finally, in the charming Catholic-Catalan culture, a purpose has been found for the figure of Sarah Palin.

The tradition of the caganer may go back as far as the 7th Century -- archaeologists have reportedly identified a votive deposit showing a Visigoth holy warrior defecating on his ancient Iberian sword. Catalonia very much enjoys the use of poop as a Christmas treat, from the whimsical caganer to the Tió de Nadal ("shit log") which is kept in the house and "fed" over the advent season, and then finally .... let's just quote Wikipedia here:

On Christmas day or, depending on the particular household, on Christmas Eve, one puts the tió partly into the fireplace and orders it to "shit" (the fire part of this tradition is no longer as widespread as it once was, since many modern homes do not have a fireplace). To make him "shit", one beats him with sticks, while singing various songs of Tió de Nadal.

The tió does not drop larger objects, as those are considered to be brought by the Three Wise Men. It does leave candies, nuts and torrons. Depending on the part of Catalonia, it may also give out dried figs. When nothing is left to "shit", it drops a salt herring, a head of garlic, an onion or "urinates." What comes out of the tió is a communal rather than individual gift, shared by everyone present.

See, this is why Spain does not need "GOP debates" at Christmastime. Anyway, in our dumb modern era even the Catalonians are not satisfied with their delightful pagan traditions, so they now purchase novelty caganer figures based on notorious people such as Earth's least-loved grifter, Sarah Palin. You can buy one here, the end. [Caganer.com via Metafilter]