Former Dumbest Person Alive Dan Quayle Is BACK, Says Trump Is A Winning Winner Because He Wins 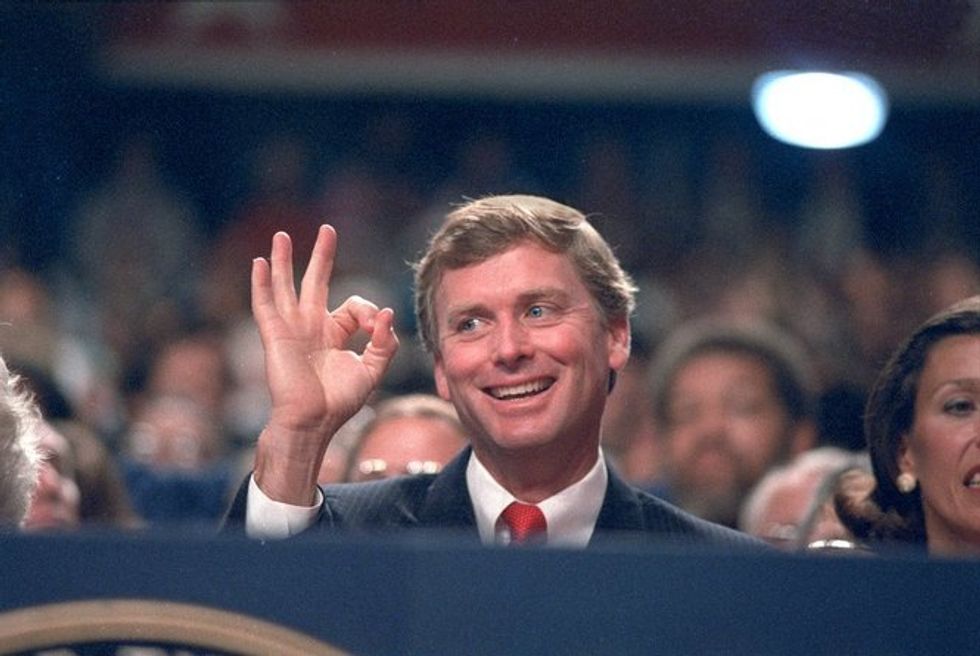 Welcome to President Bush, Mrs. Bush, and my fellow astronauts! Former Vice President Dan Quayle, whom I have not thought about since I found my childhood copy of "Where's Dan Quayle" at my parent's house over Christmas, is BACK. And guess who he loves sooooooo much? It is presumptive GOP presidential nominee Donald Trump!

Quayle stopped by both The Today Show and CNBC's Squawk Box to talk about how Donald Trump is totally going to win this election, and all the #NeverTrumpers will learn to love him, because he is a winner.

Plus, he has made the world safe for people who continually say incredibly stupid things, which surely has nothing to do with why Dan Quayle chose to come out of the woodwork at this time.

On Squawkbox, Quayle explained that Trump will totally beat Hillary Clinton, because this is "the year of the outsider," and Trump is a winner who is very good at winning. Unlike Dan Quayle, we guess, who was part of a team that lost to the Clintons back in 1992.

As far as the rest of party rallying around him? Well, Donald Trump will just do what he wants and everyone will just have to be cool with that, and embrace him as the nominee. Paul Ryan will come around too, he says, because "a great majority of his caucus will support Donald Trump, without qualification." Which, given his lack of qualifications, is the only way they could.

When asked if Trump has the temperament to be president, Quayle stated that "he is going to find out as he starts to go around Capitol Hill, folks in Congress, they need a lot of stroking. You got to be nice. He can be nice when people are nice to him."

Also, Quayle explained how Donald Trump doesn't have to release his tax returns if he doesn't wanna, because he is an outsider who plays by no ones rules but his own. Plus, it won't even be a story in a few days anyway, and we will all just let it go and let him do as he pleases.

Most of the same subject matter was discussed during his Today Show appearance, with the exception of Matt Lauer pointing out that some people thought Dan Quayle was not especially qualified to be vice president when he was first chosen for the job (or after), and asking him if he thought Donald Trump was qualified to be the president of these here The United States. Quayle's answer? "We'll find out." Which is a ringing endorsement if I ever heard one.

Though he admitted that Hillary Clinton is more qualified "on paper," he says that Donald Trump, a rich old WASP man who inherited a lot of money from his dad one time, is more qualified at being an outsider. Back in 1988, Dan Quayle said that Dan Quayle was very qualified due to the fact that he was young and good looking like Jack Kennedy, and we all know how that turned out.

Sadly, he didn't say anything thrillingly Dan Quayle-like in the interviews (did not even MENTION Murphy Brown), so let us all take a moment and remember the time he said a thing that is far more relevant to the Trump campaign than it ever was to the United Negro College Fund: "What a waste it is to lose one's mind. Or not to have a mind is being very wasteful. How true that is."