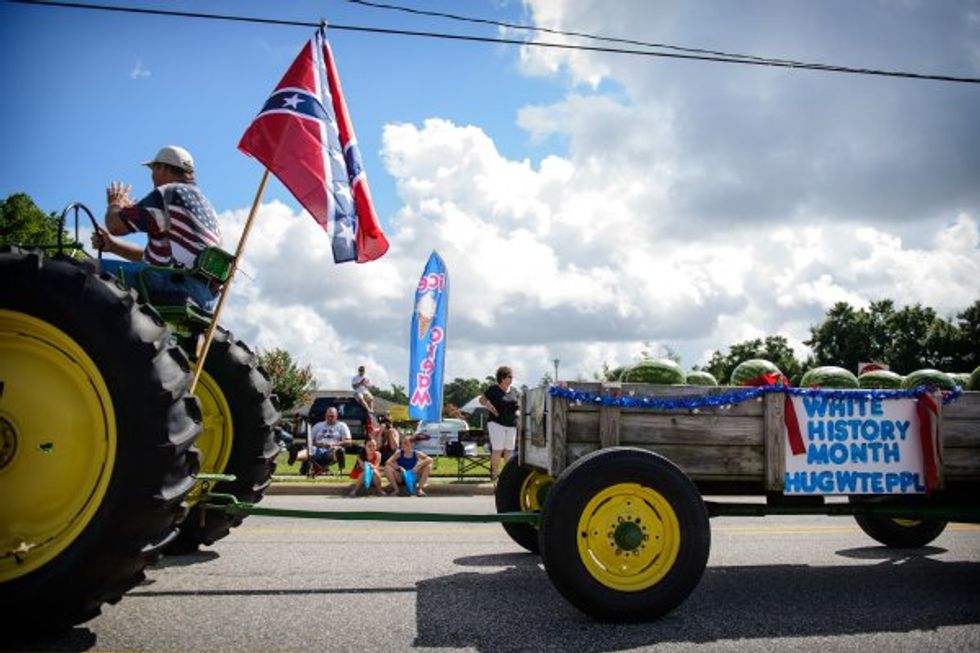 Town officials in Hope Mills, North Carolina, arefielding calls from irate residents after the town's 4th of July parade featured an antique farm tractor flying a Confederate battle flag and towing a watermelon-filled trailer with a sign reading "White History Month: Hug WTE PPL." For some reason, the callers said they thought the display might be racist. Town officials are considering instituting tighter rules on parade entry applications, possibly including a line about "no racist bullshit allowed, and don't pretend your dogwhistle bullshit isn't racist, you moron."

According to the Fayette Observer, The tractor and trailer were among eight antique vehicles entered in the parade by Donnie Spell, who has participated in town parades "for years," according to Hope Mills Parks and Recreation Department head Kenny Bullock, who also said that "he had asked a member of Spell's family to take the signs down before the parade started," and only learned that they were still on the trailer when people started calling his cell phone to complain during the parade.

Town officials told Durham TV station WTVD that Spell's application for the parade entry said only that "he would be pulling an antique tractor with a sign that read: 'Watermelons for sale.'" The TV station also spoke to a neighbor of Spell's who "said he didn't think the man was trying to be vicious or funny," because that is the sort of stupid thing neighbors say to cover their friends' obviously race-baiting asses.

In one of the least apt possible deployments of a cliché, Parks & Recreation head Bullock added,

"I feel like, in my opinion, I feel like there's a time and a place for everything ... Was the parade the place? I don't think so."

Dude, there really is such a thing as too much inclusiveness.

Online supporters of Mr. Spell insisted that he's just a good ol' boy never meanin' no harm, and pretended that there was nothing racist about the signs, since the blacks have a history month and a cable network.