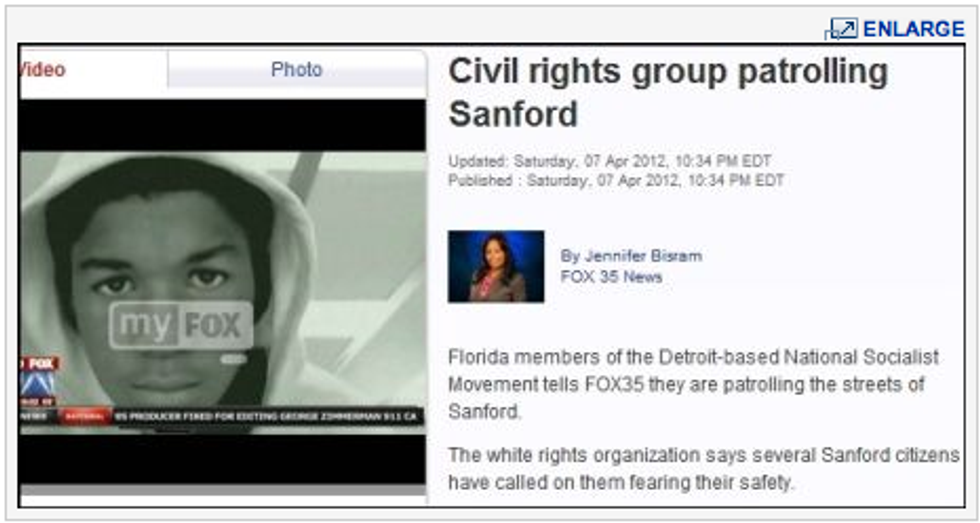 Say what you want about National Socialism, at least it's a fucking ethos. It's also -- have you heard the newest Frank Luntzian reframing? -- a civil rights group. Fox affiliate WOFL in Florida had a piece on the National Socialist Party coming to Sanford to patrol the town and make sure no white folks got Reginald Dennyed, and they accidentally (?) called the Nazis a "civil rights group." They accidentally called them a "civil rights group" in the headline (which has since been changed) and about 27 times throughout the package, and nowhere in the two-minute piece did they mention that the National Socialist Party is more commonly known as "neo-Nazis." Nor did they find anyone in the entire state of Florida who might take issue with neo-Nazis just cold comin' down and hangin' out and bein' neo-Nazis. In Florida! That is one way to listen to your base made up exclusively of the kinds of people who are defending John Derbyshire in rightwing website comments sections! And that is one way to maybe not be very good journalists? We feel like maybe there is some journalistic standard and/or practice that requires not just blindly accepting whatever people say about themselves and presenting it without question. We are not sure, maybe someone could ask Jay Rosen.